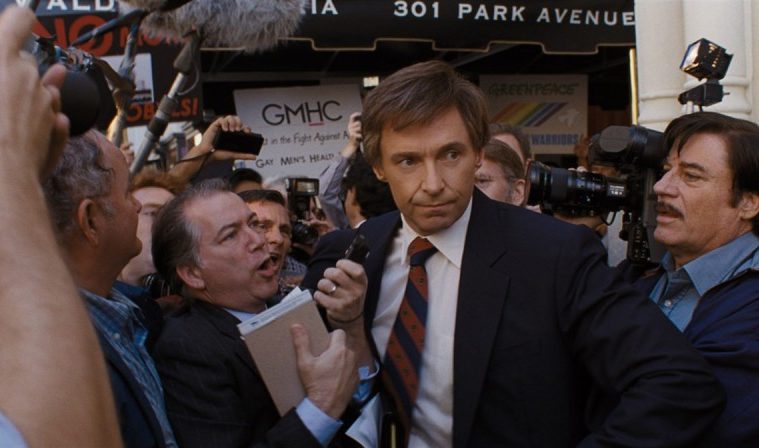 And so it began—sentiments that prove true only until the next example replaces it. We’re just two years removed from Donald Trump’s victory for president of the United States and already the art seeking answers about what went wrong and what went right have arrived. Much of it stems from finding a turning point to mark when the mainstream media started including tabloid fodder under the header of journalism, when politics shifted from the good of constituents and country to that of party and financial portfolios, or when the American public woke from its delusion that people are selfless (and then decided it was okay they aren’t). Whether the presidential campaign of Gary Hart is the answer proves debatable, but nobody can argue that it’s not a worthwhile nexus point from which to start.

Adapted from Matt Bai’s book All the Truth Is Out by himself, Jay Carson, and director Jason Reitman, The Front Runner takes a stab at showing the whirlwind three weeks that ultimately sank Hart’s career. It’s a climate only too reminiscent of the present, with a Democratic Party looking to skew younger amidst factions and uncertainty. What occurs between Hart (Hugh Jackman) and the media proves a precursor to Bill Clinton’s impeachment proceedings. This is a clear indicator of a pattern that recent years have seen escalate further away from the old “boys’ club” adage of keeping private and public lives separate in the press to where we are now: numb to caring. How do we get from journalists sinking a candidate for an “unproven” affair to video evidence of another declaring his rampant misogyny only to win regardless? Apathy.

It’s a wild story with many moving parts all keyed in on Hart. But he’s an old school idealist in a new cutthroat world, one who refuses to even consider talking about anything other than his policies and track record because nothing else should matter when it comes to educating the voters. His inner circle (led by J.K. Simmons’ Bill Dixon) is desperate to help him recognize the encroaching sense of celebrity and real potential for infamy. With men like John F. Kennedy and Richard Nixon before him—for whom the headlines regularly branched out beyond politics into public image—you’d think this would be something he couldn’t avoid. Surprisingly, though, he still can because he’s quick enough on his feet to pivot back to the issues. Hart may have even been able to bring integrity back if not for helping put the final nail into its demise.

The result is a briskly paced ensemble piece with authentic humor and pathos that poses a question to its audience about what matters. Fascinatingly enough, my opinion probably would have changed with each new iteration of this mold. I was too young to experience this specific ordeal, but do remember thinking the furor surrounding Clinton’s private life was overblown with his perjury proving borderline entrapment (even as a right leaning teen). And now with Trump I’m amazed his campaign didn’t implode early and that his party has disgraced itself so badly to cover for his every misdeed, lie, and attack in office. So while I probably would have sympathized with Hart back in the 80s much like this film does, it’s tough to stomach how desperate Reitman and company seem to ensure we still do.

The allusions and facts speak for themselves. And despite the overlapping dialogue and sprawling cast of familiar faces, the silent moments are loudest because they’re the ones that prove we get what’s happening just as the onscreen reporters find their own clarity—a-ha moments of bewilderment that the increased exposure and camaraderie between campaign and press can’t cloud from getting their jobs done. The incredulity that meets so much of what occurs during The Front Runner is as surprising in the moment as obvious in hindsight, knowing everything we know now that came out of this entitlement and arrogance. Even those who should clearly be the ones to lead our nation into the future have skeletons and no one is above public perception. It’s a truth that makes today all the most frustrating.

Reitman and company let actions do the talking for a good two-thirds of the runtime and it’s a true joy to experience. The actors have brilliant comic timing with one another and everyone feels as though they’ve been on the road to cultivate relationships built on respect. I’d argue it’s the best-directed film of Reitman’s career, every facet proving almost impeccable. So it’s therefore disappointing to watch the final third fall prey to a desire to spell things out. It could be Alfred Molina’s Ben Bradlee explaining the changing tide of newspaper content point by point after we witnessed the transformation in real-time or the intrusive focus placed upon Molly Ephraim’s Irene Kelly when tasked with breaking young Donna Rice’s (Sara Paxton as Hart’s presumed mistress) resolve by intentionally lying about how things will shake out.

Maybe this is just me being jaded. Most of these people should be morally conflicted because what they’re asked to do wasn’t yet in their job descriptions like it is today. That’s why Ephraim is a standout despite her shining moment feeling manipulative. It’s why Mamoudou Athie is the real star as fresh-faced journalist A.J. Parker—a man who sought his career with the best intentions as it was transitioning into the monster we’ve yet to figure out how to control. These are the idealists being changed right before our eyes similar to how many of us were in 2016 and their performances express that truth better than any heavy-handed monologue about ethics could. They are the ones we do and should empathize with, not Gary Hart.

Jackman is very good in the role, though, and plays the conviction and indignation perfectly. It’s great watching him spar with Simmons because the latter has an innate ability to crack jokes through the defeatist exasperation gradually settling in opposite his candidate’s bullheaded naivete. We align ourselves with the Bill Dixons because we’re just as angry and confused. Like Lee Hart (Vera Farmiga) tells her husband, “You should feel stupid.” When the rug is drawn on a scandal this seemingly untouchable candidate brought upon himself, I laughed at his contrition not because it sounded hollow. I laughed knowing its genuine attempt was too late. I sometimes thought Reitman hoped we’d pity him—and maybe we would have ten years ago. Today we simply nod knowing Hart reaped what he sowed.

The Front Runner screened at the Toronto International Film Festival and opens on November 6.