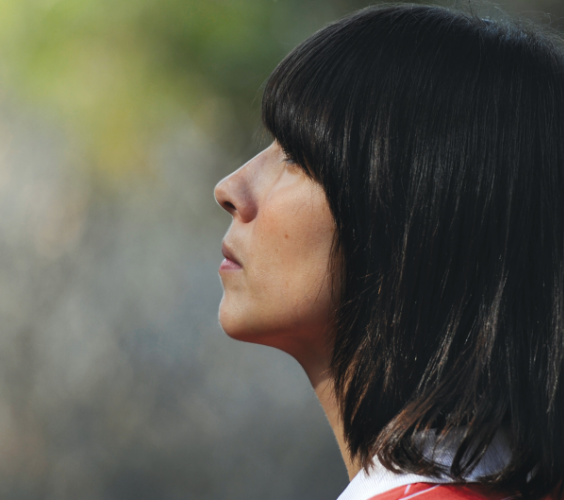 Angela Schanelec’s The Dreamed Path is so beguiling that we, the audience, have to take comfort in pointing out its one clear structural point: it’s split into two halves, each about a different couple in separate time periods. Our first is Kenneth (Thorbjörn Björnsson) and Theres (Miriam Jakob), who we see arriving on vacation in Greece in 1984; the film is quick to divert our attention to a protest about the nation’s place in the European Union, and here already feeling the weight of democracy and mythology. A young, attractive couple (easily the film’s liveliest sequence is when they busk “In the Jungle”), circumstances suddenly drive them apart when Kenneth’s parents in England fall sick and Theres gets a teaching job back in Germany.

Without too much of an indication, we cut 30 year later to Berlin, where television actress Ariane (Maren Eggert) and her anthropologist husband (Phil Hayes) come to an unloving standstill; their young child not enough to force them to mend the cold rift between them. Like Kenneth and Theres, this break-up is virtually absent of melodrama, aside from alcoholism playing a small footnote. But this starts to change once the strands strangely converge: the older Kenneth surprisingly appears in Berlin, which also homes Theres. It’s a city that, when they last knew each other, housed a wall; every division can ultimately collapse. Kenneth converses in English, but Björnsson is seemingly directed to sound like the language is being spoken phonetically, which only lends to the film’s Bressonian quality. Of course, “Bressonian” has been an art-film cottage industry for the last few decades (see how it hangs over anyone from Bruno Dumont to Jim Jarmusch), but instantly dismissing a film for its imitations when it’s ultimately up to something so mysterious feels reductive.

The links between each image are so difficult to discern; aside from a series of memorable shots at an extreme distance, this writer can only really think of the film as a series of successive close-ups on hands, feet, books, or money. This, in tandem with the off-screen voices that render the characters as almost zombie-like, makes it hard to imagine romance ever even existing in this world.

That could also lead us to thinking of it as an example of the puzzle movie, of which critic Ignatiy Vishnevetsky referred to in his television review of Martha Marcy May Marlene as the kind of film that performs a “striptease” of sorts, gradually hinting towards and revealing pieces of narrative information. Yet how much we even come to learn still doesn’t seem that greater than from the beginning. The best we can do is detect the impulse of reconciliation; perhaps averting the (ahem) “Come Dressed as the Sick Soul of Europe” pessimism, rather latching onto something that might be deeply humane. Kenneth’s reappearance is a miracle in and of itself (despite his austerity, the deeply religious Bresson wasn’t afraid of them) — though transcendence, maybe, isn’t something we should immediately be able to detect. Schanelec is undeniably steps ahead of us, but it feels right to patiently follow instead of run away.

The Dreamed Path is currently playing at the Toronto International Film Festival.