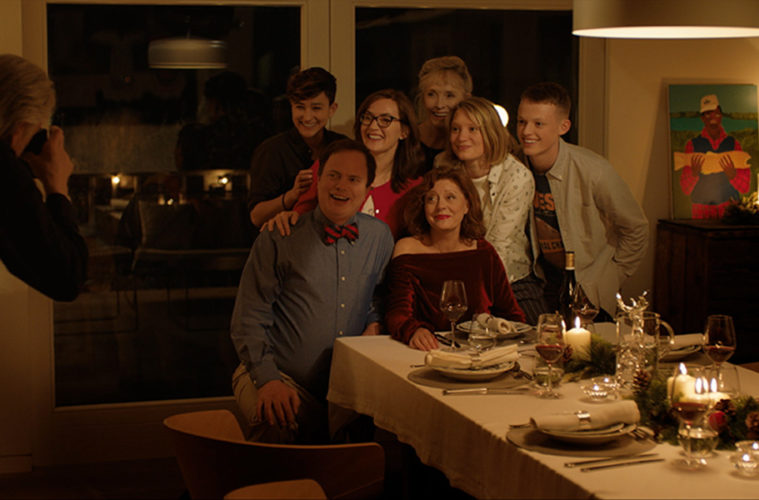 It’s not every day that an international remake retains the same screenwriter, but that’s the case with Christian Torpe and his script for the Danish film Silent Heart moving to director Roger Michell’s hands as Blackbird. I haven’t seen the original, but the subject’s universality has me thinking very little besides cultural changes were necessary for the translation. Assisted suicide is a hot-button issue in many countries and a family’s ability to get on-board a member’s decision to go through with one is tough no matter where they hail. It doesn’t matter if that acquiescence gets everyone together for a final weekend either because death’s finality is easier to handle in the abstract. Second thoughts, new revelations, and plain old fear will risk resolve as the time grows nearer.

These are the circumstances surrounding Lily (Susan Sarandon) and her small, loving, and dysfunctional clan. Her death was decided by committee, but really because it’s her wish. She wants the solace of knowing daughters Jennifer (Kate Winslet) and Anna (Mia Wasikowska) understand if not actually agree because the act itself will be harder to perform without. Her husband (Sam Neil’s Paul) will give her a strong medicine to drink, go for a walk, and call 911 with the story that she did it herself while he was gone. For that to work, though, nobody can tip the police early and Lily must still be in control of her right arm. As the degenerative disease already took her left, only that mobility keeps Paul out of jail.

So the controlling wet blanket of the family Jennifer and hers (Rainn Wilson’s Michael and Anson Boon as their son Jonathan) arrive at her parent’s secluded home first with as sunny a disposition as they can manage. Next is Lily’s oldest friend and confidant Liz (Lindsay Duncan) who wasn’t involved in the decision, but a crucial cog to her life nonetheless and therefore necessary for this final goodbye. And last is Anna, the youngest and most rebellious, with her girlfriend Chris (Bex Taylor-Klaus). She’s late, hasn’t been in touch for a while, and perhaps is hurting more than just as a daughter losing her Mom. The looming judgments therefore commence early as the sisters project their pain onto each other so as to avoid putting it on Lily.

What follows are the awkward attempts to help a woman keen on doing everything herself, a wealth of nostalgia, and heightened frustrations. The idea is to avoid tricky subjects that could poison the atmosphere, so Lily proposes they celebrate Christmas to both keep busy and distracted. She gives everyone a task and the order to make things feel as natural as possible. This weekend isn’t about reminding her of what’s to come, but of what’s already been. That means playing nice when Michael can’t help himself from spouting useless facts that annoy everyone. It means trying not to instigate the powder keg of resentment between Jennifer and Anna. And it also means supporting Paul and the brave face he’s put on to give his wife everything she desires.

There’s an obvious The Big Chill vibe as memories and revelations mix for laughter and drama. Anna and Chris’ relationship has been rocky, so her presence brings questions. The notion of family is internally debated as far as Liz being there and whether it should have been a family decision despite how much she means. And the opportunity for Jonathan to spread his wings away from a staid household of boring parents arises as this somber event provides him a safe space he’s desperately needed. Emotions run high once everyone confronts the truth of what’s happening and reassesses their role before the inevitable blowout occurs to risk jeopardizing the whole affair. The eleventh hour always brings a realization that it’s now or never to say what must be said.

That description should have you wondering what’s brought to the table that’s new, but the answer is unfortunately nothing. Blackbird is exactly what you think it will be and everything plays out exactly as you’ll assume. Its merit therefore lies in the performances and there’s not a bad one in the bunch. Neil and Duncan are by far the standouts because of how their age and acceptance infers upon their ability to push egos aside while the children conversely unravel. Wilson is delightfully nerdy with Winslet a perfect mix of that and her mother’s cheerful domineering while Wasikowska gets the most to do courtesy of an unknown tragedy her mother’s predicament has made impossible to share. And Sarandon is wonderful as always, her fear and certainty in a constant struggle.

This is enough to prove affecting despite the lack of surprises. As sweet as it is devastating, we feel the swirl of emotions and relate to the resonant push and pull between love asking for time and knowing there’s none left. There’s a cathartic release at its core that retains our intrigue for the duration with suicide, sex, and independence finding multiple in-roads and enhanced complexity as the days progress. You could almost see it succeeding on the stage with its spare setting and close quarters. These characters’ collective audience is present to provide their undivided attention so the moment to clear the air and finally move forward is now. It’s all impossible to fathom yet profound to execute. And it all ends as quietly as it began.