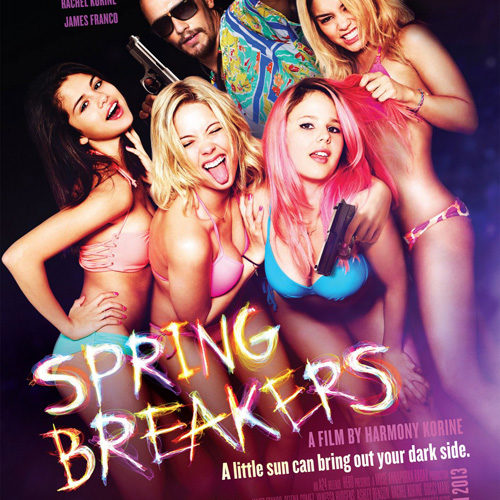 Harmony Korine is often considered a provocateur, with films like Gummo, Julien-Donkey Boy and Trash Humpers portraying rundown suburban settings populated by freakshows or subversions of the typical family unit. His newest, Spring Breakers, has drawn a lot of interest through its period of production, thanks to the casting of Disney Channel icons Selena Gomez and Vanessa Hudgens, as well as James Franco in the role of a criminal strongly inspired by rap-star Riff Raff. Add to that the easily marketable, gloss-friendly concept, and many were puzzled as to what was going to be the end result. But anyone expecting Harmony Korine to sell-out? Breathe a sigh of relief. We have the concept of four college girls pulling off a robbery to go on spring break who, eventually, end up being involved with a rapping arms dealer. Before we are introduced to our title characters, the opening scene informs us of the film’s true anthropological intent. Skrillex’s dubstep score plays over jiggling, toned, often naked young bodies on a Florida beach; beer is chugged, spilled and splashed. Certainly we expect all these things when we think of the yearly ritual of spring break; the bodies, the booze, the beats — but their cluttered, abrasive, and natural unity of motion takes on an air of doom that will be present throughout the rest of the film.

Through its digital format, Breakers plays with a variety of visual motifs which are united through a series of ellipses. The film’s stunning digital photography — shot by Gaspar Noé‘s regular cinematographer, Benoit Debie — emphasizes strong colors which are often cast over the characters. In addition, the film introduces (and soon drops) the concept of media, cutting between the formats of digital and heavy saturation, this pushed to an extreme when freakish mutation of the image occurs in the latter.

Importantly, with the fragmenting of these images comes a lack of a sense of time or, even, reality. While Korine certainly coaxes many naturalistic touches out of his performers and setting, they essentially exist in a form of the afterlife; starting out in limbo in college and voyaging into Hell when going on spring break. The disappearances characters make at various point in the narrative — once they can acknowledge what’s truly going on within their surroundings — supports this. But, at this point, I want to single out Franco. His performance as Alien (“I’m out of this world”) is impressive for a variety of reasons. While the initial appearance of him with cornrows and grills is funny on its own, it takes on other dimensions. Alien is both hilarious and terrifying; a symbol of satire in his gross decadence and anti-intellectualism which simultaneously reaches to a nihilistic, manipulative moral void. Franco plays up his dopey stoner attitude and comic timing for one side, his natural charm and surprising intensity for the other.

That said, Spring Breakers isn’t necessarily a moralistic film condemning anything, but rather a tone poem on the emotions of youthful idiocy. It penetrates the evil and melancholy lurking under pop surfaces to a point of terror and unbridled entertainment.

Spring Breakers is screening at TIFF and has been picked up by Annapurna Pictures for US distribution.