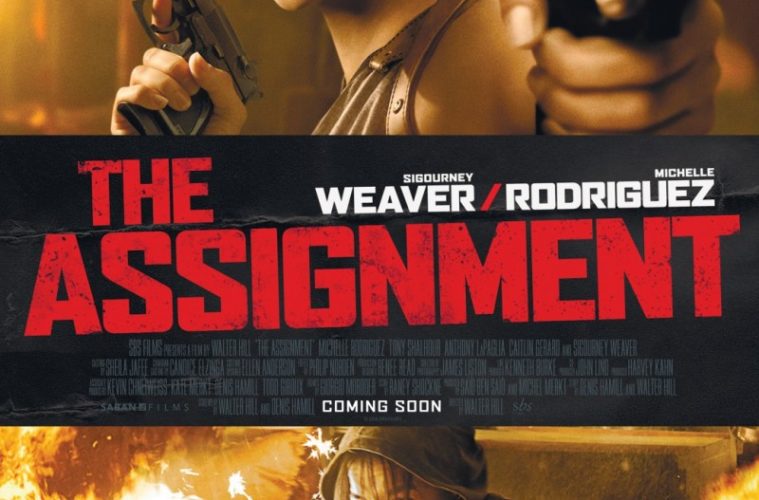 In his heyday, Walter Hill made films of a thirty-year-or-so dissonance, everything he made in the ’80s owing itself to the ’50s, be it Robert Aldrich-Burt Lancaster westerns or the peak of rock and roll. Now there comes the shocking realization, living in the “’10s”, that there’s the exact same distance between now and then. Being in the tentpole era of Hollywood, what seemed in the past like the industry’s bread and butter, the action genre — as in stunts, car chases, and gunfights, not computer-generated cuisinart — i.e. Hill’s specialty, seems strangely a relic. If it’s time to tread in ’80s nostalgia — and, while we’re at it, why not a dash of post-Tarantino ’90s crime-flick remembrance to go with it? — The Assignment speaks to these needs.

Though it seems to come positioned as an old man’s movie with something of a hot-topic twist: a transgender action hero. The terse hitman, Frank (Michelle Rodriguez), is seen pre-transition as the actress with simply a beard, ponytail, and fake dick — which, trust me, is completely self-aware as to its own goofiness — going about his job. A kidnapping and revenge-plot from an avenging enemy soon leads to Frank waking up in a whole new body.

The buoyancy of the tone is set by a number of comic book transitions, keeping in mind Hill’s previous Tales from the Crypt episodes, or, regrettably, the 2005 director’s cut of The Warriors. Though there’s not just the touchstone of the macabre EC Comics, but a stage-play-like framing device between strait-jacketed surgeon Dr. Kay (Sigourney Weaver) and psychiatrist Dr. Galen (Tony Shalhoub). These scenes may be there for the sake of laying out mounds of exposition, but they take pleasure from two older pros doing their thing — the mature cast one aspect that sets Hill’s film apart from the current pack.

One of Frank’s targets was Kay’s brother, the forced gender reassignment surgery part of her revenge scheme. Kay tells her that she’s been “liberated from her macho prison.” In portraying this sudden journey into womanhood, Rodriguez, who’s always been somewhat of a limited actress, doesn’t necessarily sell tortured well, but her gruff line-readings never tip the line of trying too hard for, say, the “Oscar clip,” perfectly suiting a film that never really risks portent. With her and Weaver delivering their number of hammy noir quips with clear aplomb, the fun they seem to be having can’t help but rub off on the viewer.

When expecting more of a real statement on gender, it can’t help but feel a little lacking. It’s exciting to think how this subject could’ve been handled outside the white-elephantine victimization and sermonizing of a prestige picture. Frank settles into the role a little too easily.

Similarly, a little bit of a missed opportunity is felt in the plentitude of gunfights; even Hill’s somewhat compromised previous picture, Bullet to the Head, sported much more physically felt and exciting set-pieces, even if the more dynamic picture in terms of pace and movement is certainly this one. The Assignment is ultimately canny in genre-play and unique in its time, factors that don’t necessarily make it great, but, beyond old-man-auteurism apologia, still hold somewhat of a flame in the modern age.

The Assignment premiered at the Toronto International Film Festival and opens on April 7.