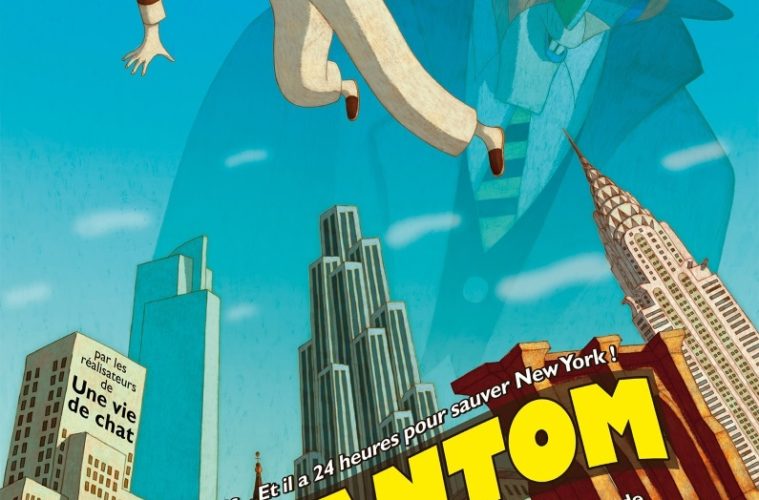 French directors Alain Gagnol (who also wrote) and Jean-Loup Felicioli have another winner on their hands with Phantom Boy. The much-anticipated follow-up to their Oscar-nominated animation A Cat in Paris was five years in the making and well worth the wait. With its vibrant colors muted for a NYC noir aesthetic and every 2D field shaded by roughly textured shadows in constant motion, the frames literally flicker off the screen to leave a lasting impression. The story—centering on a young cancer patient able to leave his body for brief periods of time, floating around the city and becoming the only hope of stopping a criminal mastermind—delivers a level of heartfelt dramatics to rival Inside Out.

Leo (Gaspard Gagnol) is a champ putting on a brave face for his parents and little sister Titi (Noa Bernaoui-Savreux) before going to the hospital for his latest round of tests. He lets his sibling in on his secret, giving her a reason not to fear him leaving because he will always fly to be by her side. Leo constantly floats away to other rooms to help those sick who have traveled too far from their own. The longer you’re away the less color you retain until translucency turns to transparency and poof, you’re gone. This is exactly how he meets embattled cop Alex (Édouard Baer), the first phantom companion to remember him in reality.

His recognition takes Leo by surprise and of course Alex needs some persuading to believe it wasn’t all a dream. Soon, though, they’re forced to trust one another because “The Broken Face” (Jean-Pierre Mariele) pops up on TV threatening mass destruction. Luckily for the citizens of New York, this super villain has surrounded himself with the two dumbest henchmen ever and a little dog quick to let temper alter allegiance. Unluckily is the fact Alex’s commanding officer wants nothing to do with him after the latest costly property damage resulting from his heroics. Only an emboldened journalist (Audrey Tautou‘s Mary) stands by their side to fight.

Because Alex is also in the hospital, the legwork falls on Mary. The two stay connected via telephone while Leo floats out to follow her every move and report back. While out-of-body the boys is seemingly comatose yet still able to speak through a sort of telekinesis. It helps avoid multiple close calls as Leo tells Alex of danger so he can relay it to Mary as Broken Face pursues removing her and them from the equation. And just as she gets trapped in his clutches, Leo finds himself fading more and more each time he leaves. Heroes one and all, they’ve prepared themselves to achieve the city’s well being above their own.

Utilizing comic book conventions for the good versus evil dynamic, there’s enough involved to charm those young and old. It embraces its noir traditions while also poking fun through the comedy of errors Broken Face’s men engage in as well as his inability to tell us why he looks the way he does. There isn’t a need for motivation besides villainy, though—he’s evil and must be stopped. The trio tasking themselves to do it are conversely more three-dimensional because we do need to know why they can justify personal sacrifice. It’s more than just Alex’s job and Mary’s quest for a good story. And for Leo, it might be his last chance to be a hero.

Action-packed and emotionally potent, the suspense remains at a fever pitch once Broken Face sets his billion dollar demand. We receive a little spy work, many examples of heartfelt purity, and an imaginative tale worth the ticket price. With as much fun as potential devastation it’s almost impossible to not fully invest in Leo and his friends—less due to New York’s plight and more for his. Because beyond the theatrics and over-the-top embellishment is a child facing his own mortality. It’s heavy subject matter that needs humor to make it palatable, but children shouldn’t be sheltered from life and death concepts by candy-coated metaphor. Phantom Boy expertly gives both and it’s a welcome change of pace.

Phantom Boy is screening at TIFF and will be released by GKIDS on July 15. See the trailer above and our coverage below.