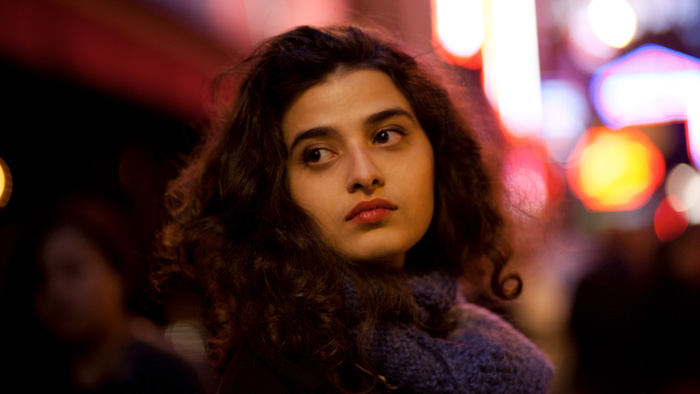 Many deflect from it, but a writer/director’s intent can change the viewer’s outlook on his/her film. Danielle Arbid‘s fictional coming-of-age drama about a college-aged immigrant from Lebanon to France (Manal Issa‘s Lina) is one containing many new acquaintances able to help her find the freedom she covets but never found back home. It can prove convenient because of this since she never truly hits rock bottom like many in her situation do. Instead there’s always a guardian angel watching out for her—sometimes manipulated and sometimes a compassionate soul. While trying to reconcile her luck with the unfortunate and horrific acts befalling her can be overwhelming, hearing Arbid state her goal as providing a “‘Thank you’ to the people who shaped [her own] life” goes a long way towards accepting its almost stifling optimism.

Parisienne isn’t therefore a strict autobiography as much as a film that utilizes Arbid’s own experiences moving from Beirut to Paris to augment its fiction. What’s real and what isn’t bears little credence to its success. That relies on your ability to look past contrivance and see the message each connection Lina makes hopes to illuminate. Here she has just left a nation torn apart by civil war and the country that takes her in seems in the midst of its own—at least that’s what the militant students at her university would have us believe. It’s therefore through these strange, exotic minds that Lina not only learns about her new home and its inhabitants but also who she wants to be within it and alongside them. Interestingly enough, one set of friends embraces her despite being exactly what they’re fighting against. Royalists Victoire (India Hair) and her skinhead boyfriend Arnaud (Bastien Bouillon) are vocal about immigrants taking jobs, leaching off taxpayers, and ruining their France yet they take her under their wing and even sublet her a place to stay. This speaks volumes to Lina’s work ethic and desire to be a relevant part of Paris’ sustainability and her charisma in winning over whomever she’s set her mind on learning from. She’s motivated and intelligent, someone who can befriend radicals because they’re nice despite finding their politics racist. It’s not as though she’s using them either—they never ask for more than friendship and she never promises more either.

Not every relationship is quite as maturely erected, though. Nor should they considering we’re dealing with a teenager on an island. This last part isn’t her fault since a distant and lecherous uncle’s advances towards her the day before classes begin burns the one bridge she needed for a roof over her head. Instead her introduction to Paris is with nothing but the clothes on her back and a made-up sob story to borrow paper, pen, and ultimately a bed courtesy of Antonia (Clara Ponsot). It’s a connection that begins under false pretenses and surprisingly isn’t one for longevity once Lina’s attempts to push her way into Antonia’s life breeds stress and subterfuge. The same can be said with first love Jean-Marc (Paul Hamy): a happily married father. But there’s also Julien (Damien Chapelle) and his easy-going nature when not engaged in drug dealing—someone who seeks the same freedom Lina does and knows it won’t be found in Paris (not because it’s unattainable, but because it’s where he grew up). There’s art history professor Madame Gagnebin (Dominique Blanc), a woman and educator you wish every teacher you ever had would aspire towards. She not only helps Lina switch classes to become a permanent fixture in hers due to the level of excellence in her work, but also on a personal level when the threat of deportation rears its ugly head. And then we have Rafaël (Vincent Lacoste), a militant moderate who hates the Royalists as much as the Communists while trying to spark his own revolution.

It’s the perfect evolution from unknown to known—a girl no one looked twice at who suddenly finds herself on the frontline of every political youth movement imaginable and in the bed of lovers with more to offer than mere physical attraction. These men become educators themselves to open Lina’s mind to art, culture, and her as yet undiscovered sexuality. From quiet wallflower to willing partner with mild embarrassment and a need for darkness to a woman who knows exactly what she wants and isn’t afraid to bare her soul and explain her intentions rather than watch as romantic attachments dissolve into pain. Paris provides her the room to experiment with mind, body, and heart in ways Beirut never could. A visit home to familial oppression only corroborates this sentiment. And while the machinations of Lina’s journey may be convenient and full of characters that shape the woman she becomes—for better or worse, in strength or weakness—nothing necessarily comes off false. It’s all implausible maybe, but not impossible. This is especially so when certain roles are introduced earlier before coming back into the picture with expanded importance. This is life and its ebbs and flows; the volatility of college life and the ideological changes happening at a rapid pace once new ways of thinking are embraced and replaced until a hybrid of them all can be cemented as “personality.” If she gets assistance along the way and survives lucky circumstances to be what she wants where she wants, it’s okay. No one can look at Lina and not agree she earns it.

In this respect Parisienne hinges greatly on Issa and her authenticity moving from one stage to the next. Her innocence and uncertainty at the beginning is pure as well as her confusion when things go wrong to leave homeless yet again. From here she builds the confidence that’s paramount to engaging those who cross her path afterwards. Every action she takes comes with an effect that impacts the next move towards someone else or away. Those she harmed or harmed her never disappear, but how she interacts with them proves how reinforced her foundation has become. Issa’s tentativeness all but evaporates to render her as much a Parisian as the next native. It may have only been two years, but her being forced to leave wouldn’t be deportation. It’d be exile.