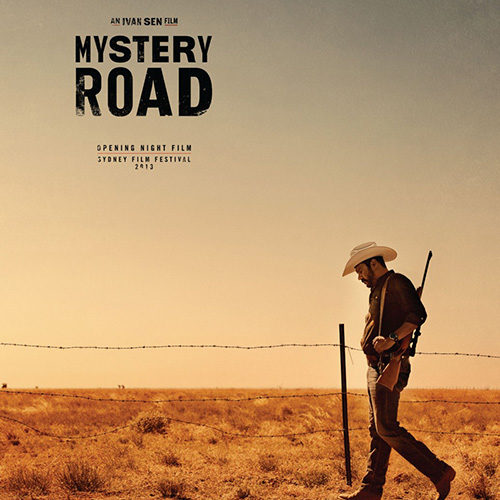 Originally conjured up by writer/director Ivan Sen in 2006, Mystery Road’s look at a “turncoat” cop working within a largely racist, white profession always had Australian television actor Aaron Pedersen in mind for the lead. Years passed, locales shifted, and the end result is finally hitting theaters as a sort of contemporary western set in the outback home of a returning detective years removed after a stint in the city. Not only an outcast with his peers—each quick to ensure his job is difficult—Jay Swan (Pedersen) finds the community he grew up in proving cold as well. Caught alone in the middle without friends besides the local coroner and an old aboriginal informant (Jack Charles) who affectionately calls him “nephew,” Jay’s first murder case results in more than just a crime to solve. The odds are mounted against him as soon as he arrives to the scene in what one could call a hazing process if the intent wasn’t so maliciously enforced. The arid dirt of the highway where the body of a young, local girl was discovered by a trucker has been trampled on by another officer, no tape cordons off the area as a crime scene, and a reporter is already talking to the witness before Jay has a chance to exit his car. With the party line from his direct superior (Tony Barry) being “no manpower to spare”, it’s easy to see that the department holds the murder of a black girl away from town as less important than anything happening closer to home. And that only makes Swan bury himself deeper into the mystery.

Sen crafts an extremely slow burning crime thriller where a lingering thought of police corruption playing a role hovers above Jay’s tireless work hunting for clues. Wild seeds, dog bites, missing jewelry, and a disconcerting connection between the dead girl and his daughter Crystal (Tricia Whitton) have him traveling to and from the murder scene and his old neighborhood to uncover as much information as possible. Drugs and prostitution unsurprisingly rear their ugly heads as the locals within earshot of the highway—David Field’s Mr. Bailey and Ryan Kwanten’s Pete—do their best to not hide their hatred of Jay’s race while pleading ignorance to the homicide. Even his ex-wife Mary (Tasma Walton) would rather chastise him about abandoning his daughter the past ten years than help him protect her now. Playing out with a similar, methodical unraveling of answers—and more questions—like critical darlings The Killing and Top of the Lake, a slew of interesting characters come and go as Jay inches closer to the truth. He follows his leads onto an undercover sting operation led by the mysterious Johnno (Hugo Weaving), the one cop if any that could easily be a major player in his case. Subtle threats fly left and right as anger, laughter, and frustration surrounds the laconic, stone-faced Jay commendably taking in the racist jabs and lack of support he encounters with complete composure. You can feel the sense of dread mounting as the scope of what he’s stumbled onto comes into focus, culminating in a final solitary stand that will show him he wasn’t quite alone after all.

I won’t lie and say Mystery Road kept me on the edge of my seat for its duration, but there is a lot to enjoy in its delicately peeled back layers. The two-hour runtime crawls at times to the point of my thinking it was about to end before realizing I had just hit the halfway mark. What it lacks in fast-paced action, however, it admirably tries to make up for in nuanced performances and gorgeously authentic aesthetic. Sen enlists a who’s who of Australian actors to surround his lead and they’re all up to the task with meaty roles requiring a lot of heavy lifting despite minimal screen time. They are the film’s strength, carrying lengthy stretches with nothing more than silent scowls and knowing smiles juxtaposed against the barren, sweaty beauty of Queensland. Consciously created as a murder mystery thriller, Sen succeeds in his goal. We follow Pedersen’s Jay as he sinks into a hole that may or may not have an exit—his professional and personal stakes in bringing the perpetrator to justice trumping the warnings to let it go. We fill the role of his partner, constantly sticking by his side when no one else is willing, and eventually step into his shoes looking through the scope of his father’s old Winchester as the suspense mounts. A climactic shootout provides an impressive bit of filmmaking as each party stands his ground despite knowing every missed shot could be his last. It’s a great old-fashioned Western gunfight that takes its time, each bullet a deliberate, purposeful shot mirroring the meticulously framed compositions flickering onscreen for the duration.