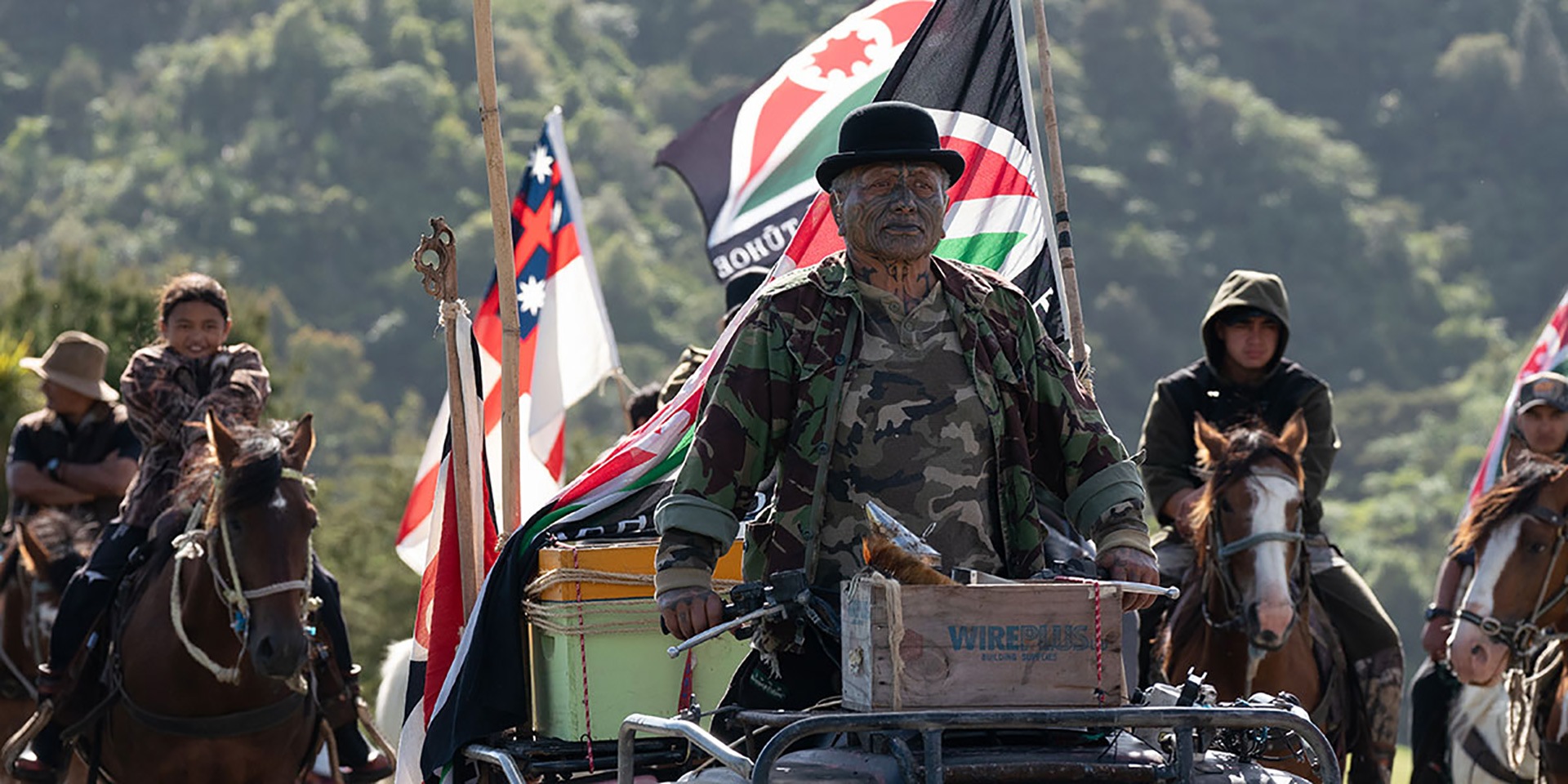 New Zealand’s Tūhoe people have faced more than a century of aggression for daring to keep their culture alive. As relayed at the start of Tearepa Kahi’s thriller Muru (a Māori word for their process of redressing transgressions), the facts are undeniable. In 1916, the police staged a raid to arrest Tūhoe prophet Rua Kenana on charges of sedition (he would later be acquitted and instead charged with resisting). A half-hour gunfight ensued leaving two dead and six wounded. Then the police staged another in 2007 to arrest leader Tame Iti for organizing what they called a “domestic terrorist” cell only to later apologize and admit their actions set relations back decades. It’s no wonder the film’s first frame states that New Zealand’s police don’t “endorse” its content.

There’s more context to that statement beyond just the desire to not condone a depiction painting them as the enemy, however. You see, Kahi isn’t recreating what happened in 2007. This isn’t a factual account. As the title’s translation alludes, this work is a response to the facts. It’s a means to lay bare why these two events occurred and put on the record why the Tūhoe believe themselves to have no reason to trust the New Zealand government to ever have their best interests at heart. Kahi has therefore taken details of those raids and merged them with the prevailing sentiment held within the heavily forested Urewera region to create a fiction that gets to the heart of the emotional and psychological cost of their indefinite dehumanization.

It’s unfortunately an all too familiar tale centered upon the gross abuse of power that still seems globally ubiquitous throughout the twenty-first century. A shadowy figure sitting in the comfort of his office (Colin Moy’s Wilson) has an exorbitant budget and a mandate to waste it on wild goose chases rather than funnel it back into the community. We know for certain that he doesn’t use it to pay people on the ground for advice considering his eagerness to take out Tame Iti (who plays himself) is based on a clandestinely recorded chant that uses language to the effect of wanting to decapitate the Prime Minister. Ask anyone from the Ruatoki Valley about it and they’d laugh (multiple residents do) because it’s performance. Theater. People letting off steam.

Couple it with surveillance of munitions training and self-defense strategy, however, and Wilson believes he has the smoking gun necessary to nuke the entire region off the map. Why would he consider the fact that this tribe had already been ambushed before? Why would he allow them the right to protect themselves when he can cherry pick evidence that suits his agenda to dissolve any perceived threat that he manifests regardless of his ancestors being the ones who created that threat by treating the Māori like animals on their own land—land they stole from them? The answer is simple: he doesn’t have to or want to give them that benefit of the doubt. He’ll extort the loyalty of a soldier desperate for promotion to shut it down instead.

The players are therefore set. On one side is Gallagher (Jay Ryan), his second-in-command Kimiora (Manu Bennett), and the police surveilling Tame Iti (led by Simone Kessell’s Maria). On the other is Iti, his followers, and the quiet community residing nearby that includes Sergeant Taffy (Cliff Curtis), his partner Blake (Ria Paki), and her troubled nephew Rusty (Poroaki Merritt-McDonald). The latter somehow becomes Wilson’s secondary target because he’s under the impression that the teen has been radicalized against the government when he’s merely being rebellious against his parents. It’s all an optics snafu exacerbated by mistrust, ego, and subterfuge. Some natives inexplicably choose the police, either as a means of self-preservation or advancement. Taffy sees the witch hunt for what it is and chooses to defend his people.

Muru is a justifiably angry depiction of New Zealand’s inherent racism. It paints those like Gallagher (a by-the-books captain) as being able to sleep at night knowing they’re just following orders and those like Kimiora (a patriot caught between worlds) as wanting to bridge the divide and prove their loyalty despite those ends seemingly always forcing their people to be the ones to have to change. It’s an interesting juxtaposition because Kahi refuses to mince words when it comes to presenting the complexity of the situation. In many respects, Gallagher—the white man—is the one Taffy can at least rely upon to want to do the right thing. The moment Kimiora willingly crosses a line only to discover duty isn’t a sufficient excuse, “right” no longer applies.

That’s the choice being made. It’s not about infidels and lawmen. It’s about men and women understanding the consequences of their actions. Taffy shouldn’t have to worry about how it looks from the outside world when Tame visits his home to sit with his ailing father on dialysis. Kimiora should have to worry about how his blind allegiance to a colonial flag impacts those who are merely trying to survive. Why then is it always the other way around? Why is Taffy the traitor by association and Kimiora the hero protected from fault? These are questions Maria didn’t think to ask when starting to spy on Tame, but, as the film progresses and her orders become cruel (quarantining a school bus of children as potential threats), she must.

Suddenly good people are being backed into corners with no escape all because a teenager believes he’d be better off in jail then with parents that can’t quite prove to him how much love they have when their struggle is compounded by being forgotten by their country. One outburst—barely an instant—caught on camera puts a chain of events in motion that will ultimately spill blood and risk even more if those involved are unable to see their power to stop the violence. Because who is attacking whom? Is Iti setting up roadblocks, detaining children, and chasing people out of their homes with semi-automatic weaponry? No. Is he invading an unfamiliar territory with a callous refusal to even try understanding their motives or history? No.

It’s an intense ride. Taffy and Blake are so used to protecting a quiet village that most of their day is spent driving the local bus to take kids to school and old folks to doctor appointments. The most trouble they see is Rusty smashing windows to get thrown in jail and punish his folks. Now there’s an army at their door. One that labels them accomplices rather than protectors trying to keep everyone alive. Curtis is therefore the film’s heart, a man willing to die to keep his people safe. Yet it’s Bennett who we remember most as his indoctrinated antithesis. Because while Taffy’s sorrow is for the circumstances, Kimiora’s anguish is for himself. The line between hero and monster is thinner than we want to believe.

Muru screened as part of the Toronto International Film Festival.