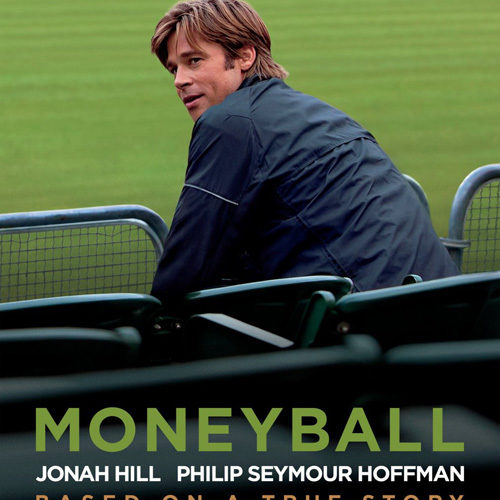 As someone whose baseball knowledge consists of nearly striking out at T-Ball as a toddler and information gleaned from ESPN-addicted college roommates, it takes a considerable amount of effort to drum up interest for a movie on the subject. It has been a long time since a notable film on the sport (no offense to The Benchwarmers), but this latest big-budget entry in the genre had enough notoriety to pop on my radar.

After Steven Soderbergh departed the project in the 11th inning, Moneyball marks the first film for Bennett Miller since the Oscar-winning Capote in 2005. It brings together Aaron Sorkin and Steve Zaillian, the former coming off the stellar The Social Network script for David Fincher, the latter writing his Dragon Tattoo adaptation. Top-lined by Brad Pitt as the Oakland A’s general manager Billy Beane, he teams up with Yale alum and number cruncher Peter Brand (Jonah Hill) to change the game as their team loses its three biggest stars. The duo attempts to forgo the usual money-hungry, power-focused ways of America’s past time and, based on statistical methods, they focus on the overlooked, specific characteristics of underdogs in order to recruit on the cheap. It is immediately clear that Brand is no Zuckerberg and Miller is no Fincher. While The Social Network‘s precise style fit like a perfectly-executed line of HTML, Miller is quick to skip over the nitty gritty elements in a brief set of montages, that work due to the outcome, not the hazy specifics.

This is Beane’s story and from the first frame we learn of his disinterest in the game. Only catching glimpses on TV, radio, or through text messages, we are mostly privy to what he witnesses in the sport. By completely skipping the big show, his ultimate goal is to fundamentally change the way baseball’s dirty insides work, not to focus on one extra run or that last out. That responsibility lies in manager Art Howe (Philip Seymour Hoffman) and Beane’s persistent convincing of him to play the underdogs he’s picked makes for some of the most gratifying exchanges in the film. Whether it’s Beane initially trying to convince his old hat managing team to play by his method or juggling the phone calls of other GM’s trying to execute the perfect trade, these scenes excite more than any swing of a bat. There is an familiar nature to most of the dialogue, as uncertain first baseman Scott Hatteberg (Chris Pratt) naturally trips over a few words here and there, or a wonderfully awkward three-way conversation occurs between Beane, his ex-wife (Robin Wright), and her new husband (I won’t disclose the special cameo).

Beane’s personal life holds surprising weight in the film, as his relationship with his daughter (Kerris Dorsey) makes for the crutch of some major decisions. All the while we get quick flashes at his unsuccessful past starting out in Major League Baseball, but these moments don’t work as well they should. We get enough of Beane’s personality and motivations through an excellent performance from Pitt. By adding gestures and glances at every turn, these extraneous elements come off a touch unnecessary in the end, especially in a final moment that feels rather forced.

While fans of the sport are likely to admire the story, it may appeal to detractors more so. Instead of glorifying the sport or taking a solemnly serious tone, more laughs are to be found then some comedies we’ve had this summer. Miller has crafted a film that pokes fun at the ridiculousness of the business as much as it celebrates how wonderful victory can feel.