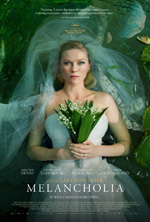 Director Lars von Trier has never been easily accessible. Part of his genius is the ability to go places others might not dare, shoot imagery no one else could even fathom, and push his actors into authentic performances that risk sending them into the same psychological tailspin as their characters. So you can just imagine how unique his vision of the apocalypse would be. It would portray emotionally unstable people as they near their end. It would expose the underbelly of familial strife. Portray the sort of disaster that would devastate in normal circumstances, but seem so trivial in the grand scope of mortality. In grand, stunning fashion, von Trier does all these things as he weaves together a story of two sisters and their eccentric family—coping, surviving, and always looking towards the sky. The planet coming their way is named Melancholia, but one has to wonder if it’s the Earth that deserves such a moniker. As Justine says, life is evil. She ‘knows things’ and as a result calmly states the end has come.

Melancholia: a mental condition characterized by great depression of spirits and gloomy forebodings; a former name for depression

With a definition like that, you won’t be surprised to find a strange, intrinsic connection between Justine (Kirsten Dunst) and the new planet no longer hiding behind the sun. She is unstable, self-destructive, and highly in tune with the changing wind. She can see red stars in the sky that should be too small for the naked eye; basks in the new celestial body’s blue glow, soaking its power as she lays unclothed on a riverbed at night; and can no longer keep up appearances, devolving into a state of emptiness and waiting, her body barely able to move. It’s as though Melancholia and she have a magnetic connection, pulling each other closer to oblivion. Justine is the destroyer; she is a God ready to cleanse the universe of an aberration. Humanity lives and suffers while the stars go on in cold, sterile circles around their gaseous suns. All that pain in death and love is a failed experiment—life no longer deemed a miracle. It is now a curse.

Taking a page from his previous film Antichrist, von Trier begins with a slomotion prologue before a painted smeared title card. A gallery of silently moving photographs set to the bombastic notes of a classical composition, the subtle, slow progress of motion occurs with the actors and environments moving as though in molasses, deliberately and earnestly, unable to escape the frame. We see the pain and sorrow in their faces, the desire to leave behind impending tragedy but also the realization there is nothing to hide. Mimicking artwork that Justine later sets out in her sister Claire’s (Charlotte Gainsbourg) library—death lingers in each. Whether a beautiful bride pulling through a web of wool; a mother desperate to save her only son; or a father at ease in his miscalculations, twirling his boy around as a shadowy sundial looms in the foreground, these images become artistic renderings of the events to come.

Before the methodical journey of Chapter Two, though, we must first experience a tome of emotional turmoil and the fabrication of joy. As Justine and Claire’s mother (Charlotte Rampling) so succinctly states, marriage is a waste—a construct that never succeeds and only serves to excuse the inevitable loneliness with a party’s drunken frivolity. With an ex-husband like John Hurt, a man who brought two new mistresses he named Betty to Justine’s wedding, you can’t blame such pessimism. But the love we see in the eyes of bride and her groom, Micheal (Alexander Skarsgård), appears pure. They laugh, joke, kiss, and don’t excuse their tardiness to a reception of exceptional grandeur. This is their night, a joyous occasion in a time of uncertainty. But how much is real? How different from her mother is Justine?

As it turns out, she’s not much different at all. The night moves at a snail’s pace, the bride disappearing often as the financier of the wedding—Claire’s husband Jack (Kiefer Sutherland—cynical growls his impatience for an evening that appears to be doing little to lift a depressive girl’s spirits. Michael tries to reach her, but she is distant. Her boss (Stellan Skarsgård) attempts to procure work, hounding her for a tagline by making a young, manipulated employee (Brady Corbet) shadow her every move. The night is a disaster of epic proportions as Justine’s Melancholia looks to collide with Michael’s naively optimistic Earth. It’s a microcosm of the impending annihilation, a girl’s implosion setting the stage for the main event. It’s one more active failure of humanity’s fickle nature, a glaring example of our indecision and self-righteous self-pity.

But the second half has little hope to give in lieu of such tragedy. Justine is now a wreck of insecurity, Claire fearful the planet’s fly-by will end in collision, and Jack can do nothing to hide his excitement at what will be the greatest event the world has ever seen. The trio remains in the couple’s monumental estate, complete with 18 holes of golf, awaiting the event with baited breath and the thrill of the unknown. Young Leo (Cameron Spurr) sees his father’s glee, his mother’s caution, and his aunt’s ambivalence, a triptych of disparate exemplars his young mind cannot assimilate. They attempt to live as usual, but such an act proves hard in extremely unusual times. They hope and pray, giving themselves over to faith while risking utter devastation if wrong. These are two halves of a whole with completely different atmospheres. Joy turns to sadness in one as hope morphs into horror with the other. But there must be more to it then melodramatic characters living through sarcastically cruel humor and an overbearing desire to make everything alright; there has to be more in a Lars von Trier film. So you find yourself digging deeper, looking for answers hidden in the symbolism and mirroring of those moving artworks at the start with their manifestations at the close. I personally began to believe the entire first act was a ruse, a game orchestrated at great expense to give Justine some semblance of happiness before her world came crashing down. The acting is broad, showy, and extremely emotive; the interactions so perfectly destructive that it must be a game gone wrong. But the world doesn’t end; Jack believes it never will. So maybe the odd cruelty was real and it merely served to show why we’ve lost the ability to continue our existence.

We’re all evil and unjust and unforgiving. We are Udo Kier‘s wedding planner—a brilliantly unexpected comical turn from this master of uneasiness. We are Jack’s temperamental struggle with compassion. We are Stellan’s self-righteous monster needing results at the expense of kindness. We have Rampling’s dejected outlook on our souls’ imprisonment within decomposing bodies forever alone and without love. Life is a constant barrage of failure and disappointment where the fulfillment of dreams only serve to make the depths of error that much more brutal when it finally comes. It’s our collective hatred and indifference that risks ending our run in the universe. Melancholia is a construct of our hopelessness; our ease to quit finally come to wipe out the hoards of unworthy life. We could have been great, but we squandered the chance.

Through a depressed young woman willingly ready to give herself to the stars, we see the calm of death and its inevitability. Claire never relinquishes the sorrow of her son’s short life, tear-streaked throughout, while Justine simply waits—both performances stunning examples of actors at the height of their craft. Devastation abounds as their characters trade places in strength, one in life (Claire) and one in death (Justine). Gainsbourg is fantastic as the motherly optimist and Dunst has never been better, her portrayal of a fragile psyche earning the Best Actress award at Cannes. Pair this duo with Sutherland’s scene-stealing Jack and Melancholia proves its worth in craft alongside its intrigue, even if the others at the Toronto International Film Festival screening with me were unable to succumb to it.

And so it’s through von Trier’s gravitas—his orchestral apocalypse we’re sprinting towards with our acceptance of evil and fear—that we discover our own impending doom. Book-ended with examples of cinema’s overwhelming ability to powerfully take our souls and crush them in visual splendor and deafening tones, Melancholia is a glimpse at humanity’s own lack of desire. It is false hope tempered with the reality of hubris. It is the ulterior motives of those we hold dear and the lack of power to protect each other from death’s cold impartiality. In the end, no one survives. We all become ash in the inferno of flames before us. What we do is meaningless when we’re powerless to prevent our destruction, so all that’s left is manufactured joy to help us slog through the pain. Perhaps we have failed; maybe we could have done better. Hopefully there is still time to change.

Melancholia is playing at the Toronto International Film Festival and hits theaters on November 11th, 2011.