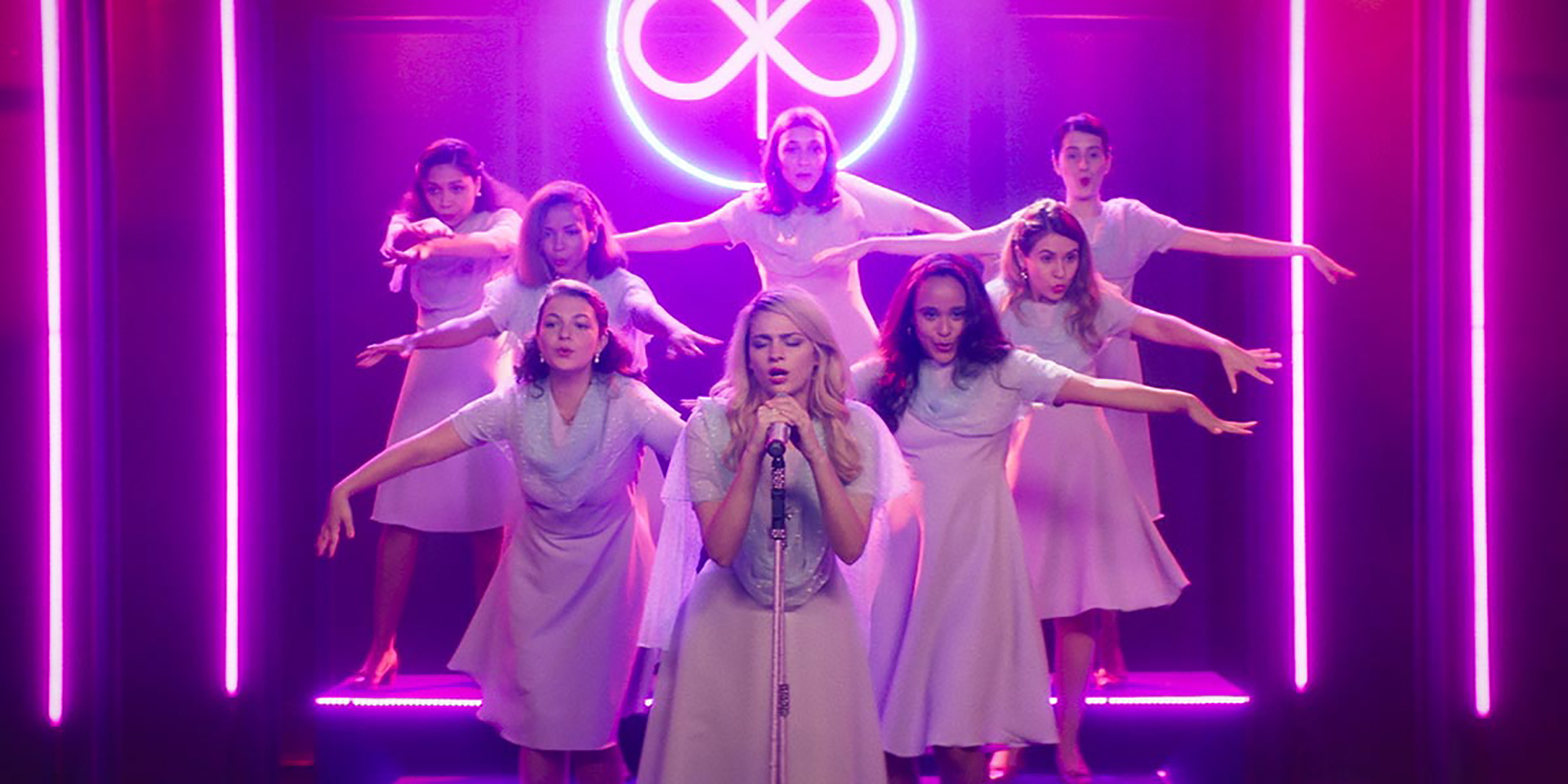 Writer-director Anita Rocha da Silveira has created an evangelical town of purity in her Brazilian-set sophomore film Medusa. It’s the type of place all Christians wish they could send their children because they know they will be carried into God’s light. The young men form a militia group to honor His will against deviants that dare embrace sin. The young women form a gang in the likeness of their heroine angel, donning white masks to confront and assault the so-called “sluts” and “whores” who dare walk alone at night in search of carnal pleasure. Their violence? All part of God’s plan. Their chastity? A test to prove themselves worthy of pairing off with a like-minded believer to be married and live according to God’s unyielding law.

This existence becomes Mari’s (Mari Oliveira) calling. She’s second-in-command of their virginal posse and best friend to their leader, Michele (Lara Tremouroux). When they aren’t patrolling the streets they’re singing reworked pop songs that praise Heaven and plug Pastor Guilherme’s (Thiago Fragoso) forthcoming election plans to his church’s congregation (the cover of the Animals’ “House of the Rising Sun” is fantastic). And when they aren’t practicing they’re either holding hands with their promised Watchmen or perfecting their make-up to ensure they’ll be the most beautiful housewives possible. Mari is so entrenched in this system that a teenage newcomer (Bruna G.’s Clarissa) is entrusted to her to steward into that light after growing up in a world of temptation. She will preach her heroine’s word to cleanse Clarissa’s soul.

Everything changes, however, when their latest target fights back. Being eight against one usually means they can subdue their victim handily, either knocking unconscious or filming their repentance. This woman sees them coming early and runs, separating them in the dark until attacking Mari with a broken bottle. She slashes her face before escaping for good, leaving Mari’s devout sister punished despite all she has given willingly to the cause. The only thing she can think to do to appease her God is find the elusive Melissa (Bruna Linzmeyer)—the beautiful actress their iconic, white-masked angel set aflame. Missing ever since, Mari believes she’s resting at a local medical facility housing comatose patients. Her hope is to snap a photo for Michele’s vlog. She receives much more.

Rather than turn those who glimpse her face into stone, Silveira’s Medusa awakens them with a primal scream. Sexuality. Autonomy. Clarity. It’s like Mari is free from a nightmare she believes was a dream. Suddenly she sees the incongruity of their message and actions. How can the women they attack unprovoked be the monsters and they the champions? What have their victims done to earn their ire in comparison to what they deliver for their penance? This town has been so caught up in the Pastor’s teaching of patriarchal norms that they’ve ignored they are the ones being hunted down. And there’s no better example than a stunning on-camera reveal of hidden abuse that’s so matter-of-fact and heartbreaking you can’t help feeling ashamed too.

There’s plenty to like here: gorgeous cinematography—there’s an unforgettable shot during a power outage at the coma facility, where the generator attempts to flicker the small, rectangular lights along the walls of the main, symmetrical room—propulsive synth beats to go with the choir, and stellar performances that at some point all skew towards parody to really drive home the indoctrination angle before each awakening opens eyes to the truth (the scream doubling as a reverse Gorgon gaze and serpent’s apple from the Garden of Eden). Silveira is carefully pushing us through a looking glass of sorts—that which frightens Mari at first (Melissa, her boss’s strange gyrations, and other clandestine dancing) become markers for a sense of freedom she’s never truly known.

Mari and Michele’s dynamic is thus crucial to the whole—the latter being the de facto leader presents the former with something of a choice upon acquiring independence. Will Michele really turn on her by donning the mask to hunt her down? It ultimately comes down to whether their predatory actions were legitimately in God’s name or merely a product of fearing what might happen if they were caught on the other side. And there’s the question of whether the scream was Melissa’s alone or a weapon any woman can wield with purpose. Does Mari’s enlightenment mean she now has the power to awaken others? What if the pressure of being God’s unrealistic ideal for abusive and conniving men conjures a wail elsewhere?

Everyone goes hard into their caricatures; the women prove themselves ready to burn the city to the ground if it means not being raped by the so-called junkies they’ve fabricated in their minds after the Watchmen beat-up a bunch of people guilty of nothing more than having a good time. Their prayers are spoken with earnest desire, the men kissing their biceps with earnest superiority complexes. And there’s Oliveira standing in the middle, unsure of what to do now that the curtain has been lifted. Hers is a towering performance of authenticity and uncertainty as she broaches the world with unveiled vision to see God’s greed is darkness and humanity’s pleasure is light. It’s time to shatter their chains and finally run free.