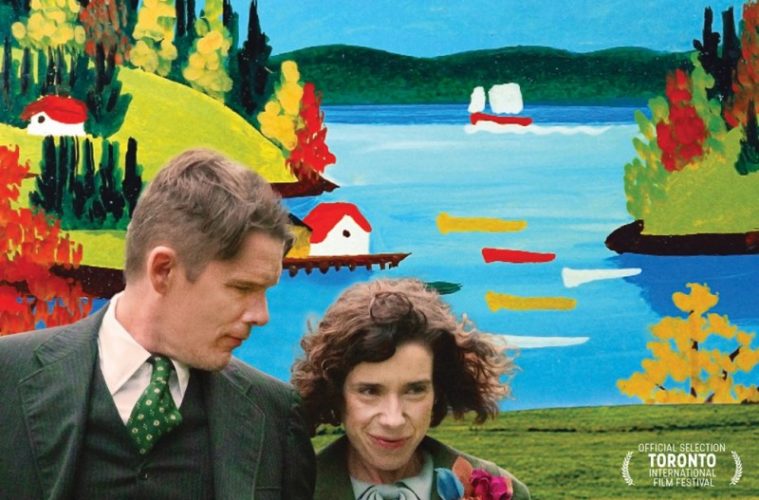 Maud Lewis, as played by Sally Hawkins in Aisling Walsh’s Maudie, was an incredibly important Canadian folk artist. Most of her paintings, all rather small-sized, involved whatever she would see in the Nova Scotian outdoors: boats, birds, dogs, cats, horses, trees, outdoor scenes, etc. Today her paintings sell for the tens of thousands, mostly due to the fact that they are so rare, but also so beautifully simple. In fact, two of her paintings were chosen to stand inside the White House.

Lewis was housekeeper to Everett Lewis (Ethan Hawke), a fish peddler who verbally abused her at first, but grew fond of her shy, subtle quirkiness and ended up marrying her in the process. As his living, he goes door-to-door selling the fish he’d catch on a daily basis. It was with that connection that Maud met a New York woman who was in living the small Nova Scotian town during the summer and got her paintings not only sold, but brought back to the States and popularized in the folk art scene.

The committed relationship the two undertook stands at the heart of Maudie. Hawkins further proves her range, portraying Lewis as a shy, slouched, but talented woman that almost never looks at anyone in the eyes, her head always down. Hawke is miscast as Everett in a role that demands a tough aggressiveness, but the actor renders it a little too sweetly. In one particular scene, Lewis slaps Maudie in the face after she embarrasses him in front of one of his clients. A couple of minutes later, he agrees to marry her and pushes his bride in a carriage down the Nova Scotia fields with a melancholic face.

The contrast between the two scenes speaks volumes about the inconsistencies in Walsh’s drama. Hawkins saves the day with a performance so attuned to her character that it becomes an impeccable transformation. The emotional and characteristic change that Lewis has, from shy, humbled misfit to popular folk artist is swiftly and realistically portrayed by Hawkins. So is her battle with severe arthritis, which ended up debilitating her efforts to continue to paint. This touching performance is another example of the consistent artistry Hawkins has displayed over the years.

Walsh and cinematographery Guy Godfree shoot the film with grey-ish toned frames and a steady camera that calls for attention to character, all while gorgeously capturing the Nova Scotian landscape. The farm and fishing lands that Godfree captures make the Canadian province seems almost surreal and at one with Lewis’ art, which was simply rendered, but felt vast, well thought-out and, at times, even a little spooky in its over-use of colors and lack of darkness.

It’s a real shame that Walsh decides to concentrate a big chunk of her movie on the stilted love affair between Everett and Maud, in a relationship that starts aggressively intriguing, but becomes the definition of saccharine by its climax. It’s a predictable romance that nearly overshadows the detailed, fascinating character drama within.

Maudie premiered at the Toronto International Film Festival and opens on June 16.