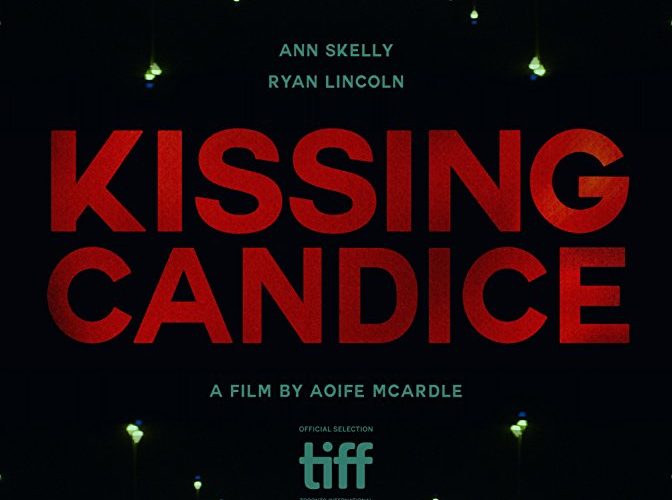 With a first scene as stylish as that from Kissing Candice, the words “music video chic” come to mind before you can even discover writer/director Aoife McArdle is a James Vincent McMorrow regular who also released a short in collaboration with U2’s 2014 release Songs of Innocence. Between the oppressive reds and aural manipulation (I thought the volume wasn’t working until the score finally kicks in to augment the titular kiss), you can’t help admiring the sensory craftsmanship onscreen despite having no contextual basis for anything occurring. What begins as a romantic interlude shared between Candice (Ann Skelly) and Jacob (Ryan Lincoln) soon shifts to the latter randomly and silently strolling down the street (through fire) until finally arriving at a bar where the former is inexplicably waiting.

It’s a wild ride oozing sexuality and dark glamour, the weird series of events on display an obvious prelude for what’s to come. I say this because it’s all a dream — a byproduct of seventeen-year old Candice’s chronic epileptic seizures. There she is shaking in the arms of best friend Martha (Caitriona Ennis) while everything we’ve just witnessed disappears into thin air. That’s not to say it doesn’t have immediate relevance, though, as the boy she kissed left an impression beyond what she interpreted as immense sadness in his eyes. If she didn’t know any better she’d tell herself that she was in love. Since she does know better she merely admits that the feeling his touch gave her was what she hoped to find in real life.

The odds of that happening unfortunately seem long. Her hometown is a mess: rundown and reeling from the recent disappearance of a young boy named Caleb (Jason Cullen). Candice’s police chief father (John Lynch’s Donal) longs for the “good old days” of The Troubles (three decades of Northern Irish guerilla violence between republicans, loyalists, and British forces) — that’s how scared this should-be sleepy town is. But with booze and drugs spilling into streets and therefore the bodies of teens with nothing better to do, there’s no way of knowing where the line is that turns punk kids into malicious criminals. So it’s unsurprising when the man in Candice’s dream arrives as an unwitting accomplice in a kidnap attempt. While his “buddies” run upon her triggered seizure, Jacob remains.

To recognize this nefarious gang with x’s under their right eyes (led by Ryan McParland’s Conor and Conall Keating’s Dermot) is a testament to McArdle’s ability to ensure what she shows us sticks beyond its otherworldly existence as lucid nightmare or waking dream. They were in that first scene too, walking and smoking behind Jacob. Suddenly we’re forced to realize there’s more to Candice’s visions than mere imagination. Somehow the fantastical things she sees prove themselves to be premonitions, impossible memories, or warnings — epilepsy as surreal superpower. Tragically she needs more time to realize this than us, her lust for adventure and to experience that kiss in reality pushing her closer towards danger with every step. And as Jacob reveals his humanity, the others confirm their lack thereof. But McArdle isn’t simply engaging in a style over substance project wherein story services aesthetic. She imbues these characters with a depth of emotion that creeps up on us when we least expect it. Some of this is due to her carefully planned yet disjointed narrative skipping through time whether in the midst of a linear sequence or not. We watch flashbacks — that she’s yet to prove are real — wherein everything we knew for certain is suddenly called into question. No better example exists than McParland’s mucus-filled delivery of seething anger as a solitary tear falls down his cheek. Right when we’re led to believe he and his crew are monsters, this reaction gives pause. What actually happened? And how far will they go to keep it hidden?

By “happened” I mean Caleb since every part of Kissing Candice ultimately revolves around this missing boy. He’s what connects Donal thanks to sleepless nights poring over the case file and anonymous phone calls with thinly veiled threats. He connects Jacob, this seemingly trustworthy soul caught up with the gang everyone in town assumes are responsible. And he connects Candice too considering his disappearance triggered the state of caution and anxiety she rebels against. The truth becomes an ever-tightening noose around them all as paranoia sets in and impulse takes control. Candice remains the lead through it all, but her journey towards love derails into one searching for salvation. The closer she gets to Jacob, the more his plot thread overpowers hers — becomes hers. It’s destiny at work.

Part of the film’s effectiveness is how willfully confounding everything gets thanks to Candice’s hallucinations. McArdle helps us navigate them by forcing her lightning rod for trouble to pop medication (the visions serving as a precursor to seizures), but not always. You will need to keep on your toes and remember each strange oddity, discerning them when reality has skewed a bit later. Remember that she sees a little boy’s hand in the post box slot because his voice within is a clue. The film is full of these tiny details meant to drive us forward and yet it surely succeeds without them too. If nothing else its sense of dread is palpable throughout, the lighting and score simultaneously beautiful and panic inducing. It’s best when wholly experiential.

This fact will prove frustrating for some, but hopefully Steve Annis’ cinematography and McArdle’s style can see them through. And while you cannot expect closure in any literal sense, self-inflicted consequences are had. Guilt and regret have a way of coming back to haunt those with good hearts and bad just as Candice’s decision to cease suffocating in the box her ailment, father, and town-wide apprehension has placed her in propels her straight into the crossfire. Let the consequences of her headstrong attempt to wrest back control of her life wash over you as the people surrounding her find themselves drowning in their fear. Embrace the complexities of each relationship and the motivations leading everyone towards a harrowing finale capped by the film’s most memorable shot of all.