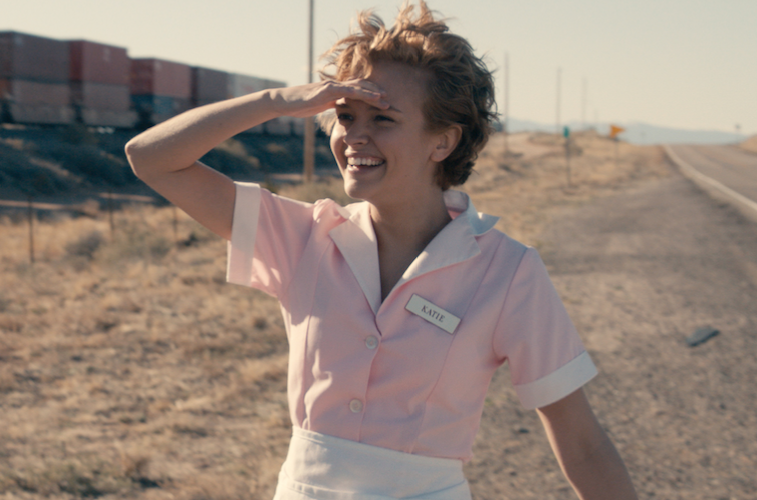 Considering how fashionable a “spiritual sequel” is in Hollywood these days, it’s a pity that those behind Katie Says Goodbye can’t legally flaunt it as one of the prequel variety to Martin Scorsese’s early drama Alice Doesn’t Live Here Anymore. Sharing more than just the pink waitress uniforms donned by Olivia Cooke and Ellen Burstyn, respectively, both films explore a seemingly inescapable life below the poverty line in the American southwest, with big dreams to emerge out of the rut. Wayne Roberts’ directorial debut certainly gets darker than that 1974 drama, but, despite a transfixing performance from Cooke, it’s in search of a more distinctive personality on both the page and screen.

Katie spends most of her time working as a waitress at the local truck stop, seemingly the biggest attraction in her desolate town. At night, she tends to her alcoholic, unemployed mother (Mireille Enos), applying make-up to her before her “dates” in their trailer park home with a neighbor, who just happens to be a husband with his own family. In between shifts, and even on break, Katie also makes extra cash to cover the rent by having sex with the men that frequent her workplace. One day, she happens to walk by the auto repair shop and is immediately taken with a new employee, an ex-con named Bruno (Christopher Abbott), but her first brush with romance doesn’t lead to the idyllic way out of this life that she hopes.

Produced by Antonio Campos, Sean Durkin, and Josh Mond of Martha Marcy May Marlene, Simon Killer, and James White, it’s no surprise how utterly bleak things get for our protagonist, but Roberts is so narrowly focused on Katie’s plight in every frame, there’s rarely an opportunity to give dimensionality to her harrowing journey, however well-acted it is. Each scene feels so cruelly engineered to knock her down a peg that the authenticity Cooke brings to the role often becomes succumbed by the banality of the drama. In the film’s most traumatic sequence, Roberts troublingly gives emotional precedence to a character who has barely registered rather than Katie, doing an unfortunate disservice to her character.

With that said, Cooke is exceptional as Katie. Exuding a persistent optimism, the camera is often fixed on her face while she cheerfully dreams of moving to San Francisco as she turns tricks and also attempts a genuine relationship. While Roberts’ script can seem uniquely brutal as her situation gets more disparaging, to see Katie’s hopefulness flicker — but never extinguish — can be heartbreaking, and there’s a strong emotional through-line carried here by the actress.

Whereas much of the ensemble is under-developed — serving as narrative obstacles for Katie rather than believable antagonists — exceptions do come with her boss, Maybelle (Mary Steenburgen), and caring client, Bear (an at-first-unrecognizable Jim Belushi), each acting more like her guardian than her actual family. Steenburgen, in particular, shines with an admittedly cynical, but effective monologue keying into the subservient relationship roles women can unjustly feel forced to take part in.

Composer Dan Romer’s score is a touch overbearing, attempting to give poignancy to situations that might be better served with a colder pragmatism, while cinematographer Paula Huidobro films the New Mexico landscape with a solemn emptiness as Katie becomes more adrift.

In her quickly budding romance, where everyone but her can see it’s doomed from the start, Katie exclaims “I love you” to Bruno. He immediately responds, “Why?” It was a question on my mind for much of Katie Says Goodbye. As an acting showcase, there’s no denying Cooke’s unwavering conviction to her character. But like the Christian cross dangling inside the car of a client recruiting Katie for sex, everything Roberts wants to convey is obtrusively front and center, leaving little room for the viewer to have any interpretation for themselves.

Katie Says Goodbye is premiered at the Toronto International Film Festival and opens on June 7, 2019.