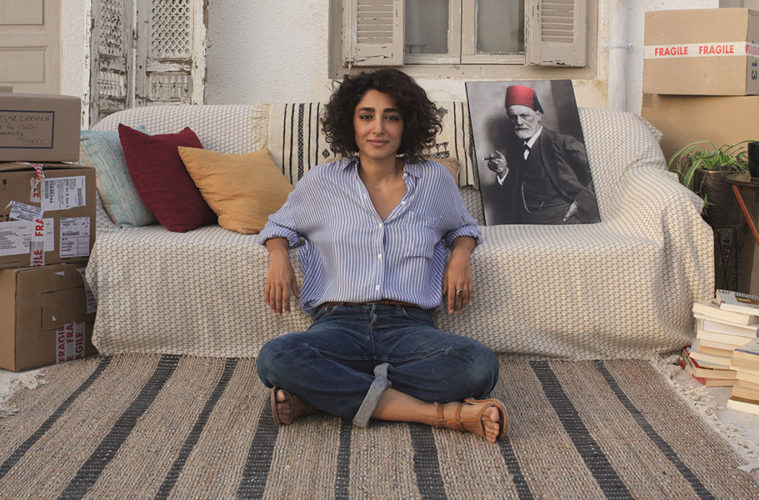 The original French-language title of Arab Bles is Un divan à Tunis, and true to the echo of Chantal Akerman’s psychotherapeutic meet-cute A Couch in New York, Manele Labidi’s debut feature is the frothy tale of an analyst coming to terms with her own sense of dislocation, while tending to the many seriocomic needs of her flock. In this case, the psychoanalyst is Selma (Golshifteh Farahani), who leaves Paris and returns to her family’s apartment building in Tunisia, where a neighbor looks at her poster of Sigmund Freud and asks her: Who is he, your father?

A psychotherapy practice, with its circumscribed location, time, and rules of engagement, is a generative structuring device, and between culture-clash jokes about punctuality and price haggling, Labidi uses Selma’s practice to serve up bambalouni-sized portions of poignancy and human quirk. Almost in spite of themselves, her analysands overcome an ingrained aversion to the imported practice of talk therapy: a depressed imam; a glamorous salon owner who can never wax away her complicated relationship with her mother; a potentially transgender character whose road to self-discovery is played fondly, but as broad, exoticizing schtick, and which proves a hard subplot for Labidi to land.

Once the floodgates open, Selma becomes the receiver of family confidences as well; the revelations themselves are hardly world-shattering—alcoholism and disappointment, rebellion and dreams of exile—but the very fact of Labidi’s earnest attention to the space between public and private selves makes Arab Blues therapeutic cinema (in the nonpejorative sense). Eight years removed from the Arab Spring, Labidi’s skits touch on retrograde religious conservatism (or hypocrisy) and gender expectations; everyday corruption and political paranoia; increased openness, inertia, and diminished expectations—but more in a gently everyday way, like a mirror held up in front of her audience.

Selma’s own in-betweenness, her sense of spiritual homelessness and unresolved, glancingly intimated troubled relationship with her parents (your therapist has her own secret neuroses!), comes through as she navigates a chatty, lethargic Tunisian bureaucracy. Farahani doesn’t mug as the film’s largely reactive straight woman. Her default expression is too interior to go over her scene partners’ heads and address the audience directly: a worried look with a faint halo of irritability, as Selma moderates how impatient she allows herself to be in her new surroundings. This attitude is clocked as condescending by her maybe-love interest, a rigidly idealistic cop looking in on her new unlicensed practice, though Farahani makes Selma’s global-North expectations only a subliminal aspect of her alienation from her birthplace. Farahani gives a far less cute performance than she did as the ditzy housewife of a PTSD-afflicted veteran in Jim Jarmusch’s Paterson, though in that film as in this one, her role as a listener is key. Selma’s impassive but attentive resting-psychoanalysis-face is a welcome adult note in Arab Blues, and keeps the film from tilting all the way over into saccharine pandering.