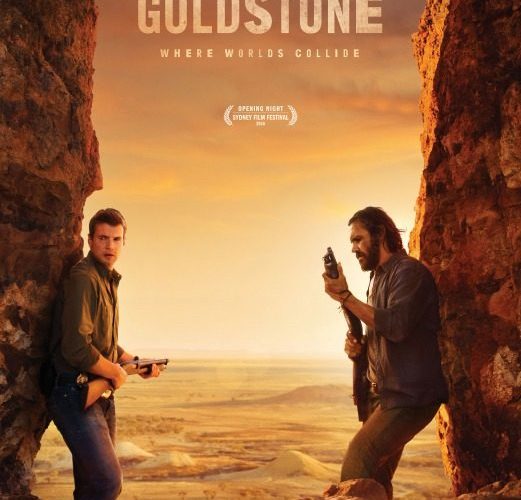 Another missing girl has Detective Jay Swan (Aaron Pedersen) on the move while the world continues to turn a blind eye. This time it isn’t an aboriginal, though, the aftermath of his work in Mystery Road culminating in a shootout with everyone dead but he a distant memory. The case that has him traveling to Goldstone concerns a young Chinese girl, her place in the desert a curiosity Jay cannot ignore. Haunted by demons that go much farther back than anything writer/director Ivan Sen introduced in his last installment, Swan is taking to the bottle and in desperate need of a win to repair his damaged soul. Unfortunately for him it doesn’t appear anyone in this desolate mining town is able—or willing—to provide assistance.

We reunite with Jay piss drunk and behind the wheel as Goldstone’s solitary law enforcement agent (Alex Russell‘s Josh) approaches. A visit to sleep it off in an open cell at headquarters later, however, and we see Swan is the least of this cop’s worries. There’s a brawl underway at The Ranch, an inexplicably descript bar/whorehouse within their dry town. With more resignation on Josh’s face than anger or authority, his position as babysitter is all but assured before Mayor Maureen (Jacki Weaver) can corroborate. A big deal is on the horizon for Furnace Creek Metals Group’s foreman Johnny (David Wenham) so Josh must handle things quietly. Apple pie and cash bribes don’t seem to faze him, but whether he’s on the take remains uncertain. Sen therefore provides two parallel paths intersecting off and on to ensure both are aware of the other’s progress. Swan continues his hunt for the Chinese girl by questioning members of the Aboriginal community who initially called the police (Ursula Yovich‘s Maria and David Gulpilil as her father and elder statesman Jimmy) and Josh continues trying to ignore him after having been reeducated into Maureen’s “Yes Man” from the impassioned purveyor of justice he proved upon arrival. But Jay sees remnants of that former lawman in Josh’s eyes and constantly pokes him with verbal jabs exclaiming how much wrong is happening on his watch. Suddenly apple pies for silence are no longer enough. Maybe this stranger is correct. Maybe it’s time to open his eyes again.

How everything progresses within the mesmerizing Australian landscapes of dust and rock proves as slow and methodical as Mystery Road three years ago. The difference lies in how details of the case are revealed. I liked Sen’s first go-round with Jay Swan, but the pace was ill-suited for a tale harboring so many secrets that ultimately stay hidden until its explosive finale. Goldstone refuses to fall prey to those same trappings, laying everything on the line instead. We know what’s happening from the start with Maureen and Johnny offering their policeman “compensation” and know what a plane of Chinese girls delivered to Mrs. Lao (Pei-Pei Cheng) means as far as human trafficking goes. Our interests therefore lie with the broken men struggling to hold onto their honor. You don’t need the original to understand Jay’s pain, but it does come in handy during a couple mentions of the chaos wrought. The real reason he’s drinking heavily is actually explained as a tragedy that occurred in the meantime, a deep wound with the one person he cherished in this life now gone. The question then becomes whether he can pull himself together to complete the job he’s been assigned. He’ll have to be sharp to combat anonymous bikers shooting automatic weapons his way, bureaucratic piranhas bearing teeth, and the conflicted nature of the one man who should be on his side. Jay may discover something worthwhile about himself during this search too—a revelation as poignant to the film’s race-relations message as it’s conveniently out-of-the-blue.

Even so, I’d say Goldstone is less about Jay Swan than Josh—the former’s trajectory much less pronounced than the latter. We care about Swan because of Pedersen’s emotional portrayal and our past investment in the character, but not from his drive to find this specific missing girl. Josh is the one who must awaken during the course of this journey whether through guilt, regret, or anger at what he’s become. He’s the one everyone in town knows as “one of them.” He’s the one for whom inquires into the logistics of what he’s allowed far too long will look suspicious. But it’s time to stop naively believing what Maureen says. It’s time to ask the girls (led by Michelle Lim Davidson) themselves and risk blowing things open. Sen also infuses the periphery with a wealth of intrigue. Davidson’s May proves surprisingly complex in her motivations for coming to Australia; Tommy Lewis‘ Aboriginal elder Tommy finds himself treading water as a pact made to bring his people into the twenty-first century is destroying them; and some extra-curricular activity between two of the more recognizable cast members may surprise as far as who’s most cutthroat. Wenham’s Johnny kept reminding me of a more vicious Murray from Flight of the Conchords, Weaver is channeling her sharp-edged power from Animal Kingdom, and Russell holds his own opposite all with feigned pleasantries barely masking the frustrations of a man who sold his soul languishing underneath. The pace might be slow, but it allows some great performances to breathe.

And despite our interest in Josh deciding whether to stand-up against the corruption is paramount, Pedersen’s Swan is the film’s heart and soul. He’s the one oozing integrity even with a few missteps into drunken and disorderly conduct. Jay knows what buttons to push with Josh and his silent interactions opposite Weaver and Wenham looking to intimidate are gold. Nothing could faze his hardened cop in Mystery Road, but even less can do so now. The only thing that mattered to him was family (and it may matter again thanks to Jimmy’s tour of Goldstone’s protected secrets), so he must treat these helpless girls as though they were his own. Just because no one else cares about a foreigner gone missing doesn’t mean he’ll let her be forgotten.