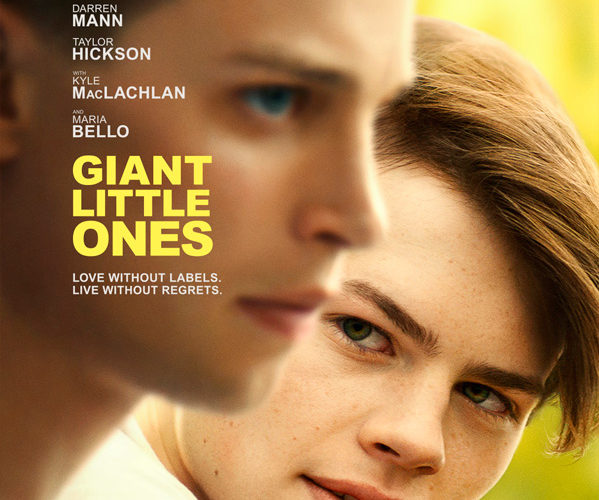 TIFF Review: ‘Giant Little Ones’ Explores the Damage of Homophobia and Toxic Masculinity

Writer/director Keith Behrman knows exactly what he’s doing when introducing a variety of people along the sexuality spectrum in his latest film Giant Little Ones. He’s intentionally flooding his canvas so that we have no choice but to accept them all rather than turn our focus onto just one. There’s no room for token characters anymore, the real-life disparity between heterosexuals and homosexuals closing as each year passes. So Behrman looks to represent that change on the big screen by giving his lead (Josh Wiggins’ Franky Winter) a trans friend (Niamh Wilson’s Mouse), a gay father (Kyle MacLachlan’s Ray), and a gay teammate on the swim team (Carson MacCormac’s Michael). He surrounds Franky with non-cisgender characters to love, resent, and accept each for different reasons that transcend compassion.

All the while he clouds this boy’s own sexuality with a girlfriend (Hailey Kittle) who wonders why they haven’t had sex. In doing so Behrman activates our assumptions, making us anticipate what will happen next before flipping the script and expanding it well beyond the clichéd, one-note drama we thought was coming. While something does occur between Franky and best friend Ballas (Darren Mann) to drive a wedge into their once unbreakable brotherhood, the fallout is refreshingly unexpected. Behrman’s goal isn’t therefore to follow this boy as he accepts his identity, but instead seek to show how public perception is influenced by lies. It’s about seeing the damage homophobia and toxic masculinity inflicts on the innocent and how it can rewrite a person’s script without their permission.

Again, however, the rumor swirling around Franky isn’t the only example considering the group of periphery characters sprawls out further to include Ballas’ sister Natasha (Taylor Hickson). She’s dealing with a similar case of slander as the word “slut” is found written on her locker door—the context of which arrives later alongside a healthy dose of catharsis on behalf of her and Franky. This world is rich and expansive, its myriad issues straddling the line between joke and abuse throughout. What would have been fine twenty years ago is met with necessary pushback now. When a medalist in Connor (Evan Marsh) takes his adrenaline high and focuses it upon his gay teammate, the locker room doesn’t laugh with him. Intolerance will not be sanctioned here.

Just because kids like Michael and Mouse don’t have to worry too much about homophobic slurs, though, doesn’t mean it’s safe to be their individualistic selves. Homophobia is still on display, yet it joins with self-hate in order to be targeted inwards rather than out. This is why Franky hasn’t visited his father’s new home. It’s why Ballas refuses to accept his role in what happened. There’s this sense that sexuality has no bounds as long as those boundless acts remain in someone else’s home. So Ballas can stand up to Connor to defend Michael while simultaneously riding shotgun with him to abuse Franky. The difference is that it’s his decision to play the hero with the former, but his co-starring role in the latter’s “scandal” takes away that control.

This notion of agency is what hurts most when taken away. We begin to infer things about characters ourselves, more or less taking their identities away from strangers we’ve yet to truly know. A series of schemes for vengeance starts as physical and psychological beatings are paired with a rejection of now clouded histories to ensure the present remains crystal clear. The relationships that get shattered here stem from insecurity rather than entitlement. One boy is willing to take the heat while the other does everything in his power to stay removed from it—including the destruction of the one friendship he held most dear. This is what happens when the concept of platonic and romantic love are kept far apart. Fear becomes our worst enemy.

It’s what prevents Ballas from confronting what occurred. It’s what stops Franky from having a relationship with his father because doing so would mean “letting him” leave his mom (Maria Bello’s Carly) for a man. They fear labels that will be placed upon them before they’re ready to accept whether or not those labels truly fit their own identity. Just look at Ray as an example for waiting. He didn’t know he was attracted to men until reaching middle age with two kids and a wife he loved completely. You’re allowed to be curious without constructing a box around yourself that declares your sexuality as a binary imperative. You can acknowledge your love for someone and agree it may color judgment at times without closing any other doors.

Behrman’s Giant Little Ones is great because of this fact. He doesn’t purposefully make Franky gay so Ballas can be the toxic male rejecting it, nor does he make Ballas gay so Franky can be his victim. Both are rendered with a confusing headspace that chooses to leave their sexuality open-ended. Characters like Mouse and Michael embrace their deliberate labels so these two boys at the film’s center don’t have to fill that role and thus ruin the complex uncertainty that proves an infinitely more intriguing experience. Behrman also deals with emotional scarring in an impressively sensitive way whether Natasha facing the disparity between what her body is willing to do opposite expectations of what it should or Carly carefully traversing the minefield Ray’s coming out left behind.

And the whole is filled with mirrored comparisons forcing us to look at how we treat each combination of sexuality and gender differently. The best example is a scene with Franky and Mouse that involves the exact same moving parts as the central incident between Franky and Ballas. One was non-sexual (possibly the best non-sexual scene revolving around a penis I’ve seen) while the other was sexual. One was boy and trans-boy while the other was boy and boy. One was straight and gay while the other was straight and straight (or gay and gay or any iteration the two care to accept). One is ignited for purely scientific reasons and proves awkward in the moment while the other possesses romantic intent before revealing its awkwardness directly afterwards.

Franky is thus instantly transported to an alternate reality. It takes one incident—one lie— to change everything with no clear way back. Wiggins is phenomenal, his character rejecting the notion he’s gay despite so many people telling him it’s okay. It’s not okay, though. Not when he doesn’t believe he is. This thing between he and Ballas is only pigeonholed as gay because that’s what society named it. And maybe it is. That’s not our decision to make. So often we throw nuance out the window for increased drama when nuance conjures the best. Let everyone pretend they know what happened and watch them feverishly stumble over themselves to embrace and/or reject it. By intentionally withholding any concrete answers, Behrman lends their adolescence an authenticity rarely seen.

Giant Little Ones premiered at the Toronto International Film Festival and opens on March 1.