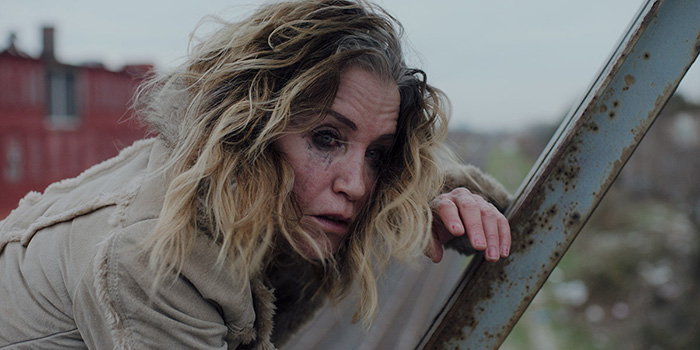 TIFF Review: Felicity Huffman is on a Path of Self-Destruction in ‘Tammy’s Always Dying’

You have to give credit to any story that allows its despicable characters to be despicable without also demanding forgiveness from their victim. This is especially true in tales concerning a parent and child considering society seems to crave this ideal that the former is due some benefit of the doubt they’ve never earned. Screenwriter Joanne Sarazen refuses to go that route. She won’t pander to audiences by making Tammy MacDonald (Felicity Huffman) anything but the narcissistic, alcoholic screw-up devoid of self-control she is. It doesn’t matter that she’s flawed, unwell, or more often than not contrite in the fallout—sympathy must fly out the window at some point. And to the character’s credit, she knows this to be true. Self-pity doesn’t rule Tammy. Self-loathing does. This doesn’t mean the ways her hate manifests won’t still hurt the target of her projection, though. Whether or not Catherine (Anastasia Phillips) acknowledges this source of the casual vitriol she endures is unfortunately inconsequential to the pain wrought. So she seeks escape through an affair with an ex-boyfriend (Aaron Ashmore’s Reggie) despite him being married with two kids (to Jessica Greco’s Kelly). She finds solace in the father/daughter relationship built with Tammy’s gay friend who also happens be her boss (Clark Johnson’s Doug). And she dreams about making this depressing life of hers meaningful by selling the drama to a Toronto-based Oprah/Springer TV show hybrid produced by Ilana Wiseman (Lauren Holly). But she’s trapped by the guilt of thinking leaving would make her no better than mom.

What would happen to Tammy if she left? This woman drunkenly climbs over the railing of their local Hamilton bridge each week like it’s a mother/daughter ritual she’s sustaining for Catherine’s sake. The latter comes to collect her each time too, coaxing her off the edge without urgency considering the regularity of this performance and the net waiting to catch her fall. It’s enough of a cry for help to keep the question of her doing it somewhere else in the back of Catherine’s mind, though. She doesn’t need that on her conscience—more guilt added to the existential dread already weighing her down. It’s amazing then how much she can wish for theatricality to come back once Tammy’s stage-four cancer diagnosis finally makes her impending death real. Therein lies the meaning of the film’s title Tammy’s Always Dying. Because even when she’s not faking it, she’s still making her way towards whatever awaits. Director Amy Jo Johnson gets a wonderful performance from Huffman in the role, one that makes it difficult for us to truly sympathize with her plight beyond the unfairness of cancer itself. There’s conflict in her actions, but also a self-destructive nature that’s simply impossible to shake. Doug is a saint and wants to believe his friend can improve enough to at least have a few good months with the daughter she’s neglected, but that says more about him than her. She tries her best to comply, but it’s just not who she’s ever been. So Catherine is let down again.

The film excels at embracing her subsequent rage. Johnson and company let Catherine get angry without a need to apologize for it. She’s earned this right after so many years of putting up with what Tammy has given her in return. No one can therefore blame her if she decides to leave for Toronto and never see her mother again. It’s okay too if that means cutting off Doug so as not to rediscover the guilt a clean break from the past has finally exorcised. He’ll understand. Sarazen’s script might spend half its time documenting Tammy’s journey and inevitable relapses, but that’s only because of how they impact Catherine finding the courage to be her own person. Even if she fails, at least she’ll have tried. It all comes together when an acquaintance (Kristian Bruun’s Jamie) helps her for no other reason than that she’s a “good person.” Think about how potent those words are for someone who’s been told day after day she’ll never be more than a bartender in a run-down town. Tammy tells Catherine they’re “nothing people” and it’s not even as an insult. She believes it to be fact. It’s no wonder Catherine wants to make money off her mother’s tragic existence. At least then it would’ve counted for something. Sadly this act is where the film loses itself somewhat in an accelerated desire to wrap its authentically messy emotions in a bow. The result is bittersweet and poignant in its complex truths, but also saccharinely convenient in its execution.

The road there thankfully doesn’t lose its power as a result since Phillips is too good to let interesting plot threads ending in abrupt dead-ends derail things. There are still some effective payoffs (the battle waged between Catherine and Kelly packs a punch as far as showing how not everyone is as empty inside as Tammy), one-sided displays of affection that shouldn’t be reciprocated solely because our culture demands reconciliation, and a bonus treat for any Remy Zero fans out there courtesy of a new August Cinjun Tate song entitled “A Ring Around” (the singer recently survived his own cancer scare). You may not like (or approve of) how things conclude, but you can’t deny the resonant if unspoken love finally released from what had been unbreakable chains.