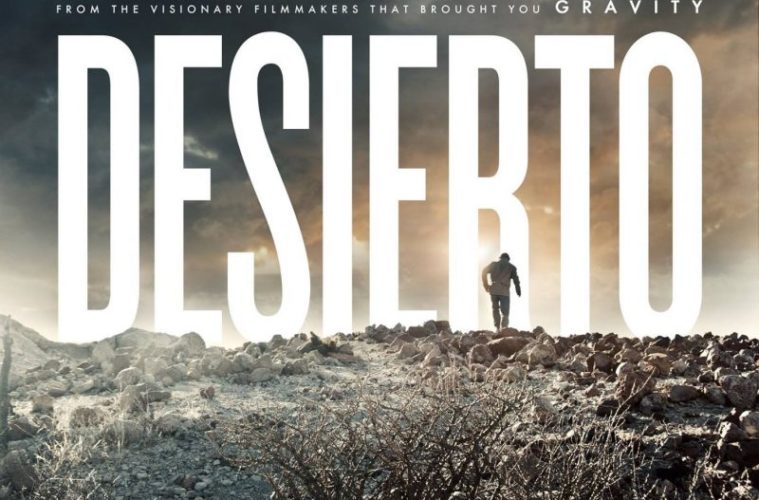 A tense thriller of survival set against a desolate landscape of quiet austerity until the deafening sound of our heroes’ pursuer returns after a brief respite allowing these strangers the time to emotively talk about their lives—no, it’s not Gravity. Filmmaker Jonás Cuarón certainly has a type, though, since his sophomore effort in the director’s chair, Desierto, has a lot of formal similarities to his and father Alfonso Cuarón’s Oscar-winning ride. Thematically different since the whole exists in the wasteland battlegrounds of the Mexican border, is fought by the impoverished rather than elite, and includes a villain possessed by a conscious psychopathy in his treatment of other human beings, it’s still difficult to separate the two when the same screenwriter worked on both.

This isn’t inherently a bad thing since Cuarón appears to have a handle on the cinematic construction of just such a suspenseful tale. He drops us right into the action like Gravity did by showing a gorgeous sunrise against a hilly desert horizon, the void of space a voluminous expanse waiting to swallow all who dare travel within. We meet Moises (Gael García Bernal) and his ten odd compatriots being smuggled by Lobo (Marco Pérez) and Mechas (Diego Cataño) before their truck breaks down. On the other side of the border, Sam (Jeffrey Dean Morgan), focused and in his pick-up with dog Tracker, performs his due diligence in keeping his country safe by finding alien tracks and reporting them to the authorities.

Their convergence is inevitable once Lobo tells his cargo to leave the automobile and begin walking through the “badlands.” The change of plans isn’t arrived at easily, but they can’t abandon everyone under such strong heat. Walking is the only option and many have journeyed to America before so they know the worst that should happen is deportation. Unfortunately, Sam’s day has gotten off on the wrong foot after a Customs officer pulls him over to question his hunting intentions. Here’s a guy Sam believes should be rounding up Mexicans in the brush and shoving them home yet he’s bothering a citizen who’s minding his own Constitutional business? Of course the game changes from rabbit to human once Lobo’s coyote run is seen in the distance.

Remember the brutality of the space debris whipping around Earth to tear apart the space shuttle in Gravity? Well that was child’s play on the horror scale when compared to the visceral extinguishing of life Cuarón utilizes here. It’s as though his set is in a vacuum because the sound of the gunshots are joltingly loud against the silence and each impact with flesh an instantaneous slap leaving bodies motionless in bloody sand. Sam targeting them with kill shots is inevitable upon seeing him with a rifle—the character a stand-in for the self-righteous, moralizing right wing crazies taking their ideals way past their coveted religion’s morality. Yet we’re still unprepared for the carnage even as he pumps that first shell into the chamber.

What follows is an effectively paced chase pitting Sam and Tracker against Moises, Mechas, a young woman whose parents made her go because their hometown was “too dangerous” (Alondra Hidalgo‘s Adela), and her hired companion who’s more interested in being paid in favors than see her arrive on U.S. soil (Oscar Flores‘ Ramiro). If you’ve ever seen a movie you can assume the battle will eventually be whittled down to a one-on-one match to the death. As such the fact Sam can hit 10 out of 12 shots before missing around five straight with Moises in the crosshairs can get tedious, but the good versus evil dynamic doesn’t leave many surprises as to who’ll win out. How our sympathetic hero finds victory becomes the appeal.

As for the politics, even though the characters are stereotypes playing on the public’s liberal assumptions of human rights, Desierto is less interested in holding one side above the other as much as showing the true-to-life tragedy real life brings. He allows Sam some backstory to his day to expose pent-up frustration—not that it justifies his actions, but maybe he wasn’t always this bad. The rhetoric being spewed by the media surely struck a cord inside him and he’s devolved in turn. As for the illegals: their reasoning for the journey is hardly about stealing jobs or food from our mouths. One desperately wants to reunite with his U.S.-born son and another has come to satisfy her parents’ desire for her safety.

The landscape is unique with natural topography creating chasms of space between predator and prey that’s ultimately narrowed by riflescope. We watch as men and women run for their lives with a sadistic cowboy calmly pointing from one to the next. His comeuppance arrives with a plea for sympathy that the audience rightly laughed at, but I get why Cuarón and co-writer Mateo Garcia included it. At the end of the day, even Sam is human. To willfully strip him of that would be to join in his own dehumanizing witch-hunt. He’s obviously deranged—a man on an island for too long—and may not truly comprehend what he’s doing until the gun barrel is in his own face. He’s not a robot and therefore frightened like the rest.

It’s a vicious turn by Morgan who generally plays the cocky tough guy antihero. To see him so unhinged is a welcome sight; his success within such a dark place serves as a testament to his craft. Hidalgo and Cataño are authentically rendered in fear and survival instincts while Bernal excels alongside them. The ease at which he takes up the mantle of protector for those in the group who’ve never made this journey before is inspiring while his knee-jerk reactions to improvising on the fly or embracing short-lived joy honest. We want him to return his boy’s teddy bear even if it means becoming a murderer himself. His and Morgan’s wordless climb towards fate ends up a memorable climax as a result.