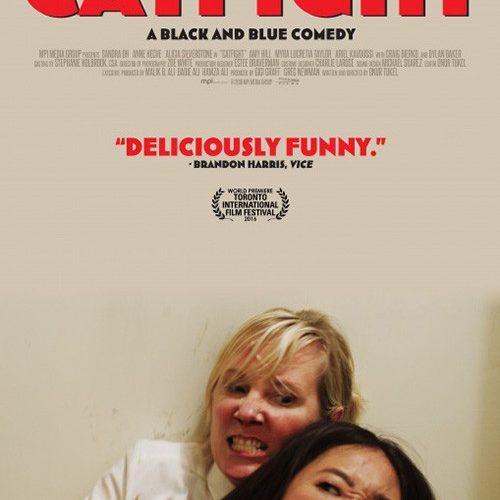 With a title like Catfight and the only available image showing a bloodied and battered chokehold between Anne Heche and Sandra Oh, our expectations are forced into conjuring hope for a wild, frenzied ride. Well, writer/director Onur Tukel doesn’t disappoint with this broad satire of American politics and wealth disparity. It only takes Craig Bierko’s rendition of a late night television host doing his smarmy best to poke fun at our broken system before introducing a fat, shirtless man as the “fart machine” to understand the tongue-in-cheek tone targeted. The working class as represented by maid Donna (Myra Lucretia Taylor) laughs hysterically at the flatulence while aristocratic housewife lush (and her employer) Veronica (Oh) remains unfazed in more Botox ambivalence than high-brow disgust.

Veronica just cannot understand such humor’s appeal. She can’t comprehend the appeal of anything that doesn’t result in making money. She drinks to overcome the boredom of her defense contractor husband (Damian Young’s Stanley) aptly focused on trash disposal in warzones, numbs her already nonexistent drive to be worthwhile in the world, and subsequently chides her son (Giullian Yao Gioiello’s Kip) for artistic aspirations rendering her hope of an affluent future for him moot. God forbid he may end up like an ex-classmate she hasn’t thought of in years, a painter she unceremoniously began ignoring simply because it was a choice that had to be made. But who knows? Maybe Ashley (Heche) became famous. It’s not like Veronica will ever know. Ignorance is bliss.

But Ashley’s truth is revealed after the next cut: still painting her grotesque imagery (on paper rather than canvas for another quick comment on American crudeness) despite success proving nowhere in sight. Her girlfriend Lisa (Alicia Silverstone) is the breadwinner facilitating this artistic dream, her patience wearing thin. A caterer for fancy soirees, Ashley is forced to help at the next one or else their relationship may be over. If only she knew the party was hosted by Stanley with a belligerent Veronica in tow, she might have stayed home. Ashley epitomizes anger with no external assistance necessary so cattiness arrives quickly once their reunion begins. It’s not much longer before the first bombastic slug is thrown to commence a cartoonish brawl with devastating consequences.

Let’s just say there’s more than one brawl that takes place. When each side secures a victory there must also be a rubber match to declare the undisputed champion. That’s just how it’s done. By that time we probably don’t care too much, though, because the major damage was wrought. Catfight ultimately spans four-plus years, each woman experiencing a lengthy coma with more off-screen death than you’d expect. Tukel delivers multiple stunning revelations like a horror movie monster wielding a hacksaw, precision a lost art as each new wrinkle is announced without ceremony or tact. The women’s respective “missing time” hides unspeakable tragedy, arriving as unapologetically as Tituss Burgess’ physical therapist saying, “Start walking now because we’re kicking you out of the hospital tomorrow.” Both Veronica and Ashley are afforded opportunities to better their lives, attitudes, and karma. Whether what they learn sticks or not remains to be seen since any hate they did harbor had presently graduated into full-on rage-fueled loathing. Maybe they could move on in a new world ruled by a Donald Trump-like president with every second potentially their last. Maybe they could forgive themselves for past errors enough to leave their nemesis alone if unable to forgive them too. You’ll realize fairly early that the latter is never going to be the case. The mere sight of the other’s face will always conjure violent tendencies for revenge and we in the audience will eat up every single bid with smile ear to ear.

They are both horrible creatures bred by society’s desire to be the best. They’re entitled, egotistical, and unwavering in their stubbornness. Oh is fantastic as the earnest socialite who appears to have never lifted a finger towards work her entire life, but she’s also superb at the contriteness necessary to believe in a rebirth. Heche revels in playing a narcissistic taskmaster who can barely break free of her own wants to acknowledge Lisa is even in the room. And the way she treats her studio assistant Sally (Ariel Kavoussi) is cruel and unusual. It’s no surprise Ashley never quite finds contrition considering she was wanting before success. To lose it is to simply add more bitterness to an already toxic stew.

And while the showcase is definitely the unbridled insanity of Oh and Heche hauling off on each other with extra-loud sound effects (and sometimes weapons), there’s something to be said about those surrounding them. Most intrigue stems from how Donna and Sally react towards their respective sadist post-coma. It’s through them that we witness the true capacity of humanity. Can a Christian like Donna forgive years of neglect? Can Sally gloss over years of abuse taken on the chin as though earned? Silverstone’s Lisa should be added to this list too because she’d do anything for Ashley if only the favor was returned even once. Veronica and Ashley see through red filters, but had they somehow ensured the others do too?

As for the biggest laughs besides each war of attrition, the political satire proved a hit. It’s a bit too showy for my personal taste, the humor proving no less blunt than the farting machine. Just because that’s the point, however, doesn’t mean I must blindly enjoy it. I was less interested in the Bierko interludes than the practical application of what he joked about. Tukel is far from subtle, but his handling of a newly re-instated draft’s consequences and the public’s craving to consume art mirroring their tortured existence is deft. We can ultimately fight until our reasons for doing so are forgotten, but at a certain point something must give. Similar to our fractured political system, the futility of arguing for argument’s sake helps no one.

Catfight premiered at the Toronto International Film Festival and opens on March 3.