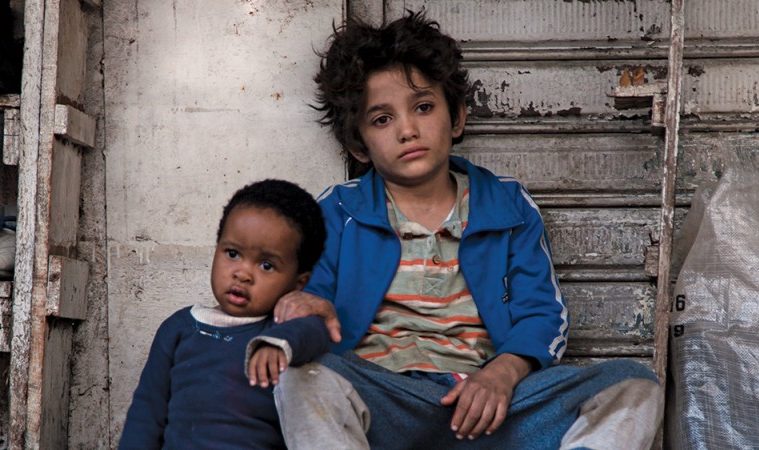 The synopsis doesn’t lie. Young Zain (Zain Al Rafeea) is in prison, his five-year sentence just put into effect. He has no papers despite being born in Lebanon and thus a doctor must estimate his age by his lack of baby teeth as twelve. Yet here he is anyway for a crime his mother dismisses “childish,” a label the judge scoffs at considering the length of his term. It’s no wonder then that Zain has called this latest trial to sue his parents for neglect. Worse than that, his reasoning turns more heartbreaking when he blames them for letting him be born. Born into a house smuggling drugs into that same jail for money. Born into a family with more kids then you can count. Born into a life that’s over as soon as it begins.

While this might be the premise behind Nadine Labaki’s Capernaum, it hardly scratches the surface of what she and co-writers Jihad Hojeily and Michelle Keserwany offer. Because while it’s funny to laugh at this child’s stoic severity on the stand as he calls his victim a son-of-a-bitch (twice), he isn’t quite the hardened criminal looks may presume. An unprompted rewind to a year ago shows as much despite his profane rhetoric. We catch glimpses of his love for his siblings and especially his sister Sahar, the light to his existence. Wise beyond his years, Zain knows what’s in store for the girl since the much older son of their landlord never hides his affection for her as a wife. No matter what their parents say, he’s knows it’s only a matter of time before she’s gone.

When it happens he has no choice but to leave too. Why stay when his good intentions and altruistic deeds have no effect on those he loves? Why stay with parents who would sell their children for a dollar even if it’s done as a utilitarian deal made with heavy hearts? So Zain runs away until he finds a situation he might be able to use to his advantage. On this quest he meets an Ethiopian immigrant named Rahil (Yordanos Shiferaw). It’s no surprise he grows an affinity for her since she soon proves willing to do whatever it takes to raise her toddler Yonas—to her own detriment. She shows Zain what a mother should be and he seeks that emotional security more than anything. He’s intelligent enough to survive, but Rahil and Yonas provide a reason.

Her situation isn’t ideal either, but she has a connection who could smuggle them out to a Scandinavian country more amenable to their plight. His name is Aspro and he’s worse than Zain’s parents as far as opportunistic endeavors go. So when Rahil suddenly disappears, the rules get thrown out the window. Zain now has a ward in Yonas—a surrogate Sahar—that he must protect. He sees through the wiles of men like Aspro and even uses their deceptions against them to serve his own needs. Here’s a twelve-year-old suddenly thrust into parenthood and he does a better job than was ever done for him. He blows the entire nature versus nurture argument up by transcending both to become something he never had an example to copy.

Capernaum is a poignant character study of a boy being punished for the crimes of a system that never gave him a chance. It’s a scathing commentary on the effects of poverty, the failure to properly respond to refugee crises, and simple human decency populated by those struggling just as much as the next yet have also crossed a line they cannot return from. Zain ultimately crosses it too, but there’s hope for him insofar as the reasons why he did so. While the others sacrifice everyone else to get what they need, he sought to protect their victims. He acted emotionally because he was driven by love rather than greed. He was willing to remove a tumor rather than become another malignant part of the problem.

If that sounds extremely depressing, you won’t be surprised to hear it is. What makes Labaki’s work so great is that she still somehow finds a way to inject humor into the horror. It helps that she found a boy as charismatic and fierce as Al Rafeea. He’s as effective at bringing tears to our eyes when fighting his parents to remove Sahar’s arm from their grip as he is making us smile. A lot comes at the price of vulgarity and disrespect, but you can’t blame him after experiencing his life. His vocabulary is a defense mechanism, a tool to be heard when kids his age are so often ignored. His Zain is a singular creature we could aspire towards—fearless in his quest to ensure those who should be punished are even if it’s merely symbolic.

What he seeks as damages in his lawsuit may shock you in its extremism, but not its intent. As we laugh at how Zain carries himself and feel a sense of pride in his unorthodox but bold actions, he’s enduring unimaginable psychological pain that places him on a road to clarity. While it sort of is him against the world, the rest aren’t pure evil. We should sympathize with his parents because their argument is relevant despite their irresponsibility in creating it. They’re struggling with their guilt and that shouldn’t be disregarded when vilifying them for their weak response. This room for complexity is exactly why we need to pay attention to everyone’s circumstances since we’re all a product of our environment. The buck doesn’t stop with his mom and dad. It merely starts there.

This means cracking down on human trafficking, adding nuance to non-violent immigration laws, and creating a clear path towards amnesty. These are struggles many nations face including America as evidenced by our current political climate. And the actors Labaki has compiled know first-hand what it feels like to be on the outside looking in. They’re all non-actors performing from experience, some refugees themselves. More than a movie then, this project serves as a document of their lives and an example of how they cope. That sense of naturalism is a boon with real personalities and scars laid bare for the camera to capture and Labaki to curate into a human story of the utmost importance. Through Zain she provides the cost of our failures and hope for our future.

Capernaum screened at the Toronto International Film Festival and opens on December 14.