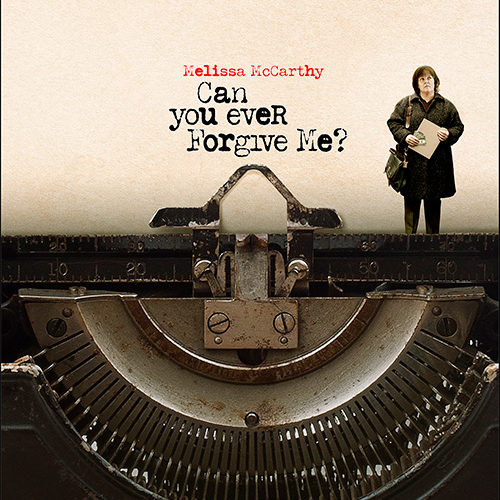 TIFF Review: ‘Can You Ever Forgive Me?’ is a Work of Compassionate, Cathartic Contrition

Do you have a Lee Israel work on your shelf? What should be a matter of owning one of her books or not since she was a notable author of biographies who hit the New York Times Best Sellers list, things get much more complicated when you look closer to see she wrote more than just about the likes of Dorothy Kilgallen and Estée Lauder. Israel also wrote as some of her subjects too. During the early 1990s when she was down on her luck professionally, financially, and personally, a fateful discovery occurred that would ultimately ensure her name would no longer be accompanied by “author” in the history books nor her own 2008 memoirs. From that point on her infamous occupation became simply “literary forger.”

The label has allure — enough that she was able to leverage her crimes into an autobiography I assume made her more money than the almost four hundred letters she passed off as written by Dorothy Parker, Noel Coward, and others. If that’s not the American Dream in action I don’t know what is. Give her credit, though. We have become a nation of people who love to hear about a good hustle. Had she been born a decade earlier so that a publisher would have weighed the morality of releasing the book in the 90s rather than the ‘Aughts, I’m not sure any would. Here we are ten years later and Lee Israel’s tale has hit the big screen with the clout of Melissa McCarthy at its back. Here’s the thing: whether Israel (McCarthy) genuinely felt the remorse she supplies the judge after her inevitable arrest, hearing it is enough. It’s enough to spin her memoir as a work of cathartic contrition and to provide a screenwriter with the care and skill of Nicole Holofcener (alongside co-writer Tony-winner Jeff Whitty) to give it the compassionate understanding general audiences will need. Add the likes of Marielle Heller at the helm and Can You Ever Forgive Me? moves from a potentially self-serving farce to the heartbreaking tale of an artist haunted by alcohol abuse, depression, and poverty who found a way to put her voice back out into the world. Even those duped by her forgeries were willing to admit her forgeries leaped off the page.

What’s really great about their script is that it doesn’t touch upon the why of Lee’s predicament. We meet her as she’s fired from a job well beyond her expertise and well past her heyday as a writer worthy of advances for research purposes. She’s a hard-drinking, cat-loving, profane introvert who pushes people away and thus unsurprisingly never “played the game” to keep her career churning simply by being likable within the industry. That’s all we need to understand her position in life and why escape doesn’t seem to be in the cards. Lee’s past successes mean little to what happens. This is specifically about the chapter that followed where she retrofitted her craft, compromised her artistic scruples, and felt better than she had in quite some time.

Add a little adversity from an agent who pulls no punches (Jane Curtin); an unscrupulous friend who doesn’t understand what she’s doing but applauds the ingenuity (Richard E. Grant’s Jack Hock); and a potential love interest (Dolly Wells’ Anna) for an avenue towards authentic remorse in the moment (whether or not she lets it stop her from digging her grave deeper) and you will find the three-dimensions necessary to turn what’s practically a comedic heist film into a resonant character study. The wealth of psychological and emotional turmoil arrives through nuanced performances and the practicality of how things look rather than telling us straight out what things means. There are many memorable moments here, but none more powerful than McCarthy’s embarrassment as her apartment’s stench is revealed.

This is a scene played for as many laughs as heartstring tugs. It’s a turning point for Israel to realize what she has let her life become and how success (albeit from shady dealings) can turn things around in an instant. While we do watch her confidence increase and depression subside, however, Heller and company doesn’t let her off the hook as far as guilt is concerned. Lee may not have regrets about what she did, but you can see more than the fear of being found out as she begins growing closer to those she’s cheating. And when the only person she can confide in is a scalawag himself (Hock), he becomes her accomplice rather than an example that lets conscience take control before it’s too late.

McCarthy and Grant’s rapport in these roles cannot be beat. Their caustic wit is mutual so each biting takedown is either appreciated or met by another in return. While there’s obvious affection at the back of this, however, you can’t ignore how insecurity drives their personas. Rather than true friends, it’s as though they’re using each other to avoid their loneliness — two pariahs the world has left behind that can bond together through their inability to find anyone better. The platonic love they share is thus tainted in a way, the conditions of their relationship revealed as the grip of FBI inquiry tightens. They’ve helped to legitimately rejuvenate the other and yet also made certain their respective crashes back to earth will be the worst they’ve ever faced.

It’s a credit to the filmmakers that we never believe they’ll avoid consequences. This isn’t merely a product of the movie being a true story for which we know the conclusion either. McCarthy and Grant embody the emotional issues they battle in ways that let their manic mood swings explode into cruel anger and apologetic horror respectively. These two were dollars away from destitution when they found each other and that threat is only amplified as their newfound comfort is exposed to be just a temporary reprieve from reality. Heller therefore earns the ending’s sympathy despite what could have become a no-holds-barred escapade before it. She never forgets that these are real people rather than caricatures. They may not earn our forgiveness, but they definitely deserve our empathy.

Can You Ever Forgive Me? screened at the Toronto International Film Festival and opens on October 19.