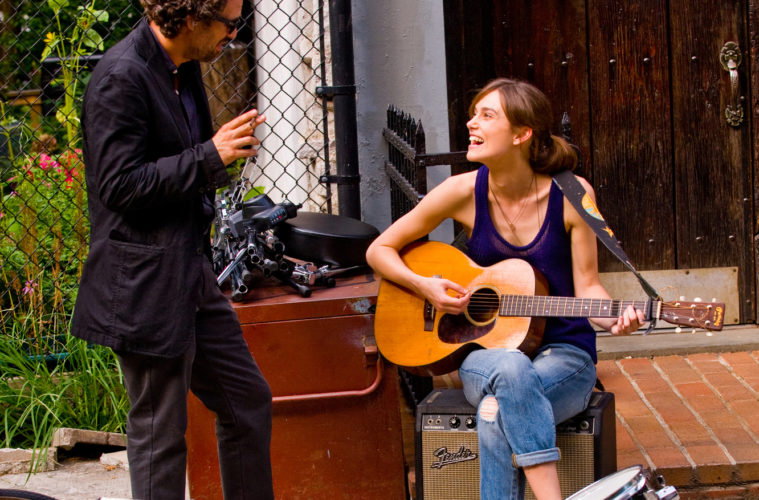 To answer the title’s question—Can a Song Save Your Life?—writer/director John Carney says “yes.” A song can save someone from jumping off a subway platform and someone else from the searing emotional pain of being scorned in love. Music in general is an art form that can move us to tears with one simple chord or touchingly real lyric. It alters us in a way that can’t be explained; the same song telling a person there is purpose while the guy standing a foot away might hear nothing. In other words, it’s not the song that does the saving necessarily, but the specific moment in time it comes into contact with its target. A beauty can resonate, reach your heart, and tell you everything is going to be okay.

Using flashback as a way to explain how Greta (Keira Knightley) and Dan (Mark Ruffalo) end up in the same NYC bar on a fateful night putting them in each other’s path, we witness her being betrayed by long-time boyfriend Dave (Adam Levine) and him getting fired by the co-creator of his record label (Mos Def). She tearfully finds herself moving out of the home Dave’s newfound fame earned him to crash with an expatriate friend, played by James Corden, before flying back to England while he walks the streets unemployed, on the verge of divorce, and the least favorite person of his daughter Violet (Hailee Steinfeld). Greta didn’t plan on singing when Corden invites her on stage at an open mic, but she does and Dan hears it during his last drink.

So we receive a bunch of first world problems leading to Greta and Dan becoming each other’s last chance at professional and personal success. It’s serendipitous and contrived, but so was Once to a point. That film was so authentic courtesy of its virtually non-existent budget, however, that this one going through the same motions with recognizable faces and a much more polished veneer seems less so. Rather than Glen Hansard playing guitar on the streets for survival, Corden does it in a playfully buffoonish way reeking of charm rather than desperation. Instead of never seeing Hansard’s or Markéta Irglová’s significant others so their friendship can exist in its own sweet way, we’re constantly reminded of what Dave and Dan’s wife (Catherine Keener) did to push them away. Can a Song Save Your Life? is mainstream Once in this respect, but that doesn’t have to be bad. It hits the sweet spot of love’s tortures and love’s ability to heal with overly cutesy situations and its fair share of laughs. Carney gives us some memorable sequences, such as Ruffalo imagining a full band accompaniment to Knightley’s fight song that gives her original folk singer acoustic aesthetic a bombastic, rocking edge. The instruments behind her are played without musicians since it’s all happening in Dan’s mind and it becomes a wonderful setpiece to invigorate you for the story to come. Namely, the two must cull together a band spanning a dead-end job pianist, two orchestral savants still in school, and Dan’s friend/superstar Troublegum’s (Cee-Lo Green) bassist and drummer. They travel the city recording songs wherever they can for a live album Mos Def will hopefully use to sign her and give him back his job.

Each step of the way is obvious, yet realistic, in a somewhat heightened fairy tale rejuvenation of the two sad sacks at the center. There’s some good humor—the majority of which coming from Corden’s fantastic support—as well as touching commentary on the struggles of monogamous love in the music industry. Greta plays her part in reconnecting Dan with his daughter, while he shows her she has as much if not more talent than Dave despite his upcoming tour and album. Issues concerning artistic integrity crop up in simplistic terms and Carney thankfully never makes it so Knightley and Ruffalo partake in any sexual tension or ill-fated romance. No, it’s about the music, finding a reason to live, and making amends with yourself and those around you.

The original songs are great—yes, Knightley sings; the acting is solid; and the story familiarly sentimental and uplifting. It’s a small film that doesn’t try to do too much and should play huge with audiences more attuned to Hollywood dramedies than indie darlings. While similarities to Once are hard to ignore and the more manufactured direction can be slightly eye-rolling, maybe its potential mainstream success can drive new viewers to the masterpiece that propelled Carney’s career. And there is a wonderful sequence in the middle that harkens back to his debut’s simplicity where Knightley and Ruffalo walk NYC attached by a headphone splitter, like he did on his first date with Keener. While I’d rather have seen a real-time depiction of that moment set to a memorable track-list of pure romance, I still enjoyed this charmer for getting most things right.

Can a Song Save Your Life?  (now titled Begin Again) is currently screening at TIFF and will be released by The Weinstein Company in 2014. Click below for our full coverage.