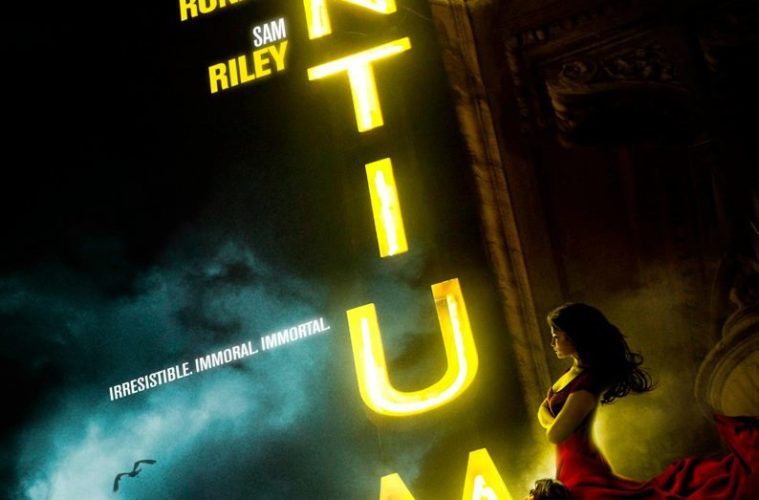 There’s a moment in Neil Jordan’s Byzantium when the strange family unit — mother Clara, daughter Eleanor, and new “boyfriend” Noel — watch what seems to be an old Hammer horror film on TV. In it, we see a stake jabbed through a female vampire in this seemingly 1960s-filmed genre flick. It is fitting, perhaps, to see this meta moment in Jordan’s film, since it has many of the tropes of bloodsucker cinema, but also goes beyond them, creating something epic, bloody, and very enjoyable. Similar in style and spirit to Jordan’s Interview with the Vampire, it is, in fact, the director’s best film of the past few years (at least since Breakfast on Pluto), and his most muscular effort since 1997’s The Butcher Boy. I found it to be one of the more original and involving vampire epics to come down the pike recently, far closer in feeling to the great Let the Right One In than anything in Stephanie Meyer canon. While it certainly does not equal Tomas Alfredson’s modern classic, it’s a solid, twisty treat.

Premiering at this month’s Toronto International Film Festival, Byzantium opens with Clara (Gemma Arterton in a bold, brassy performance) and her daughter Eleanor (the ever-intriguing Saoirse Ronan) being forced to once again flee their current home. As we learn, they have been on the run for two centuries, vampires being hunted for a transgression detailed later in the film. Next stop is a seaside town in which Clara meets the morose Noel (a stammering Daniel Mays), a sad-sack of a man seeking someone—anyone—to love. They move into his late mother’s old hotel, the seedy Byzantium, and Clara seizes the chance to make it a sort of brothel. As we dip into their present life, and the story of how they came to be, the film, based on Moira Buffini’s play A Vampire Story, its characters taken on added weight. Clara, for example, becomes much more interesting after we meet the detestable Napoleonic captain, Ruthven. As a monstrous rapist who is not above, well, any dastardly deed, Jonny Lee Miller is wildly over the top, yet it works. His actions haunt Byzantium, and its leads, and the effects are still chasing them.

As Clara develops her new business opportunity, sad Eleanor meets a rather awkward fellow teen, Frank (nicely played by Antiviral star Caleb Landry Jones), starts to attend school, and hopes beyond hope that she and her mother can stay in one place for a little while. Predictably, that’s going to get very difficult, and very quickly, thanks to the men who on their tail. After an occasionally choppy midsection, the action hurtles along to a wild and bloody final stretch and a satisfying conclusion. Throughout, Jordan’s direction is stylish and smart, while its cast succeeds in making its characters truly involving. It is no shock that Ronan gives a fine, appropriately glum performance, perfectly embodying a 200-year-old teenager. But the surprise in the cast is surely Arterton. She proves her work in The Disappearance of Alice Creed was a sign of good things to come, making us understand exactly why Clara does what she does, while also bringing to it a delicious sense of old-school, Hammer-style fun. Meanwhile, Sam Riley gives another fine performance as Ruthven’s fellow Navy man and Ronan’s Hanna costar Tom Hollander makes for a believably caring teacher.

Perhaps this one might meet a more promising fate outside of a festival setting as it is not typical TIFF fair, exactly, and it is also a bit more than Just Another Vampire Movie. (Aren’t we all sick of the dreaded JAVM?) Byzantium works as both gothic horror and offbeat character study, and for a Jordan fan, leaves but one unanswered question: Where’s Stephen Rea?