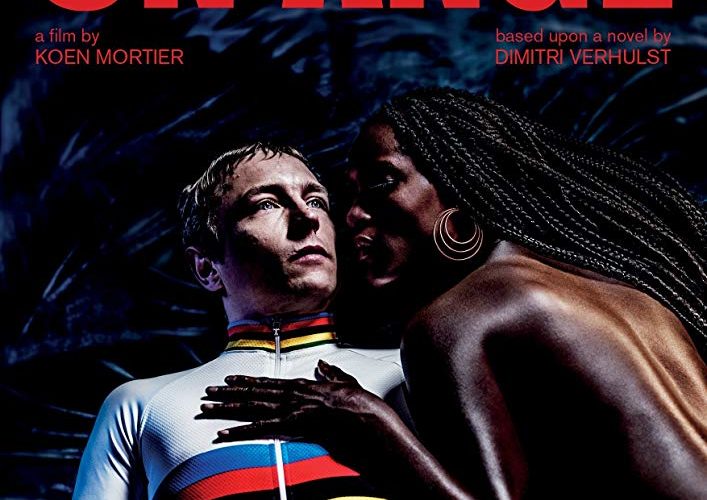 Two lost souls struggling to reconcile their image meet in Senegal by chance. One’s a prostitute — although she rejects the label and the registration card that’s as much a means to procure wealthy clients as a permanent brand upon her skin. The other is a world-famous cyclist just recovered from a devastating accident that brought unsavory questions to light thanks to the hospital finding cocaine in his blood while there. Desperate to escape the limelight of fame and the spotlight of infamy, he flies to West Africa for a break. Both therefore carry a ton of baggage where their identities are concerned and how the world sees them isn’t how they see themselves. On this fateful night they observe each other with fresh eyes and potential love. Koen Mortier’s film Angel proves an intriguing mix of fact and fiction. Not only is it adapted from Dimitri Verhulst’s novel Monologue of Someone Who Got Used to Talking to Herself — a tale with obvious allusions to Belgian cyclist Frank Vandenbroucke and the prostitute he met in Senegal — but Mortier also infuses his lead (Fatou N’Diaye’s Fae) with the words of a sex worker he met himself. He’s very quick to ensure audiences won’t take what happens onscreen as truth, however. An early frame of text explains that what he’s shot is a “fictional dramatization based on true characters and real events” to pique interest and dissuade lawsuits. And as Fae’s narration begins, we realize the myriad emotional and psychological hardships transcending any desire for answers.

We meet her as she spies upon a red room with tortured memories. She talks about who she is, what she does, and how her feelings for Thierry Barsfort (Vincent Rottiers) were of the love at first sight variety. From there we smoothly transition back in time to watch Fae awaken from slumber before meeting with her friend Binta (Aïcha Cissé). And as they move about their hometown we shift to Europe while Thierry receives an earful from a cycling team none too pleased with his decision to pack-up and leave. Mortier crosscuts the women with the men — Thierry’s brother Serge (Paul Bartel) picks him up from the airport — until ending up at the same nightclub. Thus begins what will become an unforgettable and tragic affair. As the evening continues we witness these two love-starved characters growing closer than you’d imagine possible in such short time. Promises are made, drinks are imbibed, and choices are settled upon for better or worse due to that which they cannot escape being no matter how hard they try: a whore and a junkie. But there’s palpable electricity before things wind down. The frame is soaked in red as music blares to only see Fae and Thierry’s expressions of affections, mouths moving without words to hear. We’re therefore jolted awake as though from a dream once conflict arises and we’re injected into his nightmarish hallucinations portending a future steeped in darkened paranoia and fear. It’s so surreal that the next morning’s reality hits like a sledgehammer.

Those dreams are a huge point of entertainment, introspection, and interpretation. We read into what it means when Thierry is a magician with dead rabbits or why he’d be running out of a house shooting a gun at a naked woman screaming for her life. All the pent-up anger and frustration is boiling over inside of him and the drugs allow him to let loose in his mind so it won’t spill over into life. But of course it must regardless of this release and in a way that leaves Fae scared and confused. She too seeks to break free of the stigma of her career, constantly showering to wash away the previous evening in order to enjoy the day as though a new person freshly unmarred. Fae finds an empathetic sense of compassion when push comes to shove. Thierry discovers demons he cannot outrun. The hope is therefore that she can save him. Just as she wonders if she’ll find true love and a man who doesn’t instantly devalue her, this stranger arrives with authentic affection and words that humanize her like so few ever have. So why can’t she be the person to hold his hand and lead him away from the toxicity of fandom and sponsorships — his own form of whoring so to speak? Fae doesn’t know who Thierry is and doesn’t need anything he has to offer except his heart. She can be his escape from the chaos, a drug able to give him strength rather than simply numb the pain.

Angel isn’t a fairy tale and it’s not wholly about this stranger in a strange land coming to rediscover his identity away from it all. Fae is the star here. She’s the narrator and the character left affected by everything that occurs. N’Diaye is absolutely luminescent in the role, her strength as noticeable as her tenderness. This is a woman who refuses to be put in a box, one fully cognizant of what she does and what she’s willing to do. Whereas Thierry buckles under the pressure of what’s asked of him by family, employers, and fans (Rottiers is great too), Fae will not sacrifice her identity for anything or be afraid to standby those who do. She stands tall, boldly loves, and inspires with unwavering courage.