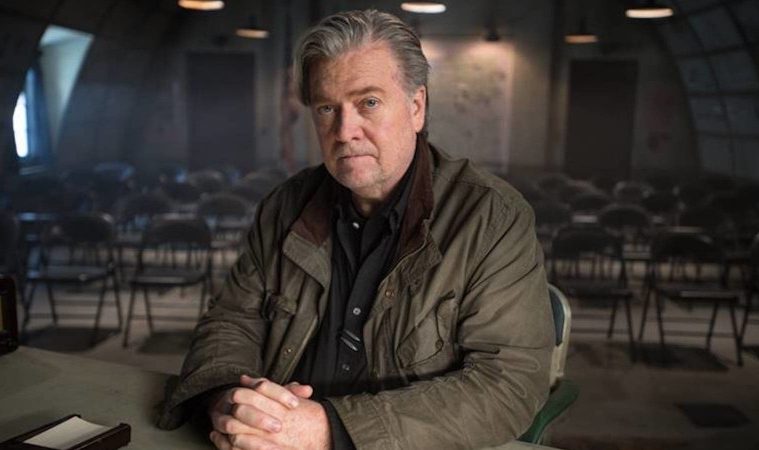 It’s impossible to separate American Dharma, the latest film from legendary documentary filmmaker Errol Morris, from the controversy surrounding its subject. Steve Bannon—former Trump campaign/administration advisor and guru of the so-dubbed “alt-right” movement with his former far-right propaganda news site Breitbart that he helped popularize alongside the late Andrew Breitbart—recently found himself “pulled from” the New Yorker festival of “ideas” when people fairly questioned the point of giving his “ideas” a platform. The broad strokes of his rhetoric are saving America’s economy and bringing about jobs through racist dog-whistle nationalism, disrupting the elite class of bureaucratic politicians, and even more unregulated trickledown economics—a policy a lot of Democratic and Republican elites already agree with him on (remember that “tax bill”?) despite the evidence that it is responsible for creating more wealth inequality than ever.

Which is why going into Errol Morris’ third installment of his “I sit down with politicians responsible for terrible things” trilogy it’s difficult not to think about the point of it. The Fog of War is an excellent film, one where Morris interviews Robert McNamara, the cowardly stats man and Secretary of State under JFK and Lyndon B. Johnson responsible for escalating the Vietnam War. In that film Morris deploys the “give enough rope” interview technique of remaining quiet and letting McNamara hang himself with his own words, primarily in that film a series of desperate, fumbling excuses for decades-old war crimes almost everyone could agree was an absolute, state-sanctioned atrocity. About an hour into that film, having heard McNamara drone on and on about the lessons of WWII and his fear of nuclear annihilation (as if not nuking Vietnam was an act of generosity), Morris stops him and politely says: “At some point we have to approach Vietnam.” It’s one of the most cutting lines ever delivered in a documentary, one that reveals the depth of McNamara’s avoidance, and revealing all his sputtering and squirming for what it is.

Needless to say, there’s nothing in American Dharma that even remotely rivals that moment. Dharma plays much more like Morris’ second entry, The Unknown Known, which featured a similar style of interview with Secretary of State for George W. Bush during the invasion of Iraq, Donald Rumsfeld. The problem with that interview was that Rumsfeld was a much more accomplished rhetorical speaker, a career politician who can wriggle out of almost any tough question with sly reversals of debate and goal-post shifting. It doesn’t make him right on any of his actual historical policies (in fact Morris catches him in a lie a number of times) but it doesn’t matter because he comes across victorious. “Why is this man smiling?” was the tagline for that film, and it’s very clear: because he’s already won. He got away with it and the same political double-speak he used to do it gets him out of any corner Morris tries to back him into.

As for Bannon, he’s a much less accomplished speaker than Rumsfeld but a similar dynamic builds between he and Morris where he attempts to hang Bannon with his own words but Bannon is Extremely Online, and is one of the pioneers of not just the current presidency but what online, bad-faith political arguing on the right looks like right now—a bit in the film where he dives into the specifics of how he spun the debate surrounding Trump scandals during the 2016 election with hypocritical mud-slinging is not uninteresting to hear. Another aside that goes into how he created a real market economy for the trading of items and gold in World of Warcraft is even more revealing. Bannon is crafty, and not unintelligent, and his policies (which have made their way to national attention and influence, terrifyingly international if rumblings in Europe and Canada are to be believed) are completely disastrous.

Morris gets a jab at them and Bannon’s larger hypocrisy a handful of times in Dharma, but the way Bannon brushes them off and moves on proves just how inconsequential it is to his worldview to point out its inconsistencies, and it’s not helped by Morris’ stylishly epic treatment of Bannon—the expressive, slow-motion photography Errol shoots, ostensibly as a joke, only serves to self-mythologize Bannon and so do the frequent comparisons to American films like Twelve O’Clock High, Bridge on the River Kwai, and The Searchers. They are used to show us both how some of these regressive attitudes are not radical and new and to investigate Bannon’s own place as an individual within an immoral system–the latter of which is a completely meaningless thing to consider in the face of fascist rhetoric.

Morris goes on about a “good Bannon” and a “bad Bannon” at length, flattering him by engaging in a “both sides” mentality that is deeply unhelpful seeing as how Trump supporters and #resistance folks are already going to go into Dharma with their minds made up. A few moments where Bannon gives his own misinterpretation of some of classic films Morris shows him, and how he bends them to his worldview, is briefly funny but then quickly revealing in how people watching will do the same—Bannon even opens the film by saying Morris’ own Fog of War inspired him to make movies, not realizing what the film was really saying about McNamara. But it doesn’t matter. This is the strategy of Bannon and trying to engage with him and his ideas in good faith (as Morris does here) only serves to muddy the rhetorical waters for everyone.

The most instructive moment in the film is when Morris admits to voting for Clinton during the DNC primary and Bannon flips the table and pushes him on that decision. Bernie’s policies were more broadly popular and polled better against Trump (and in its own way was an outsider, working people movement like his but interested in actual left policies Morris should agree with), and Bannon asks him why he would possibly do that. “I was afraid,” he says. Of Trump, of Bannon, of these “ideas.” So, he fell in line with the inept Democratic establishment, which at the time offered very little in the realm of a vision that countered Bannon’s and instead was content to superficially argue with it. It’s a severe moment of weakness for Morris who refers to Dharma frequently while promoting it as a “horror” film, and the silence between the two men functions as a reminder of the real horror here: who has the power now.

Bannon may have been fired from Breitbart and the Trump administration, but his “ideas” have directly influenced American policy for probably at least a decade (a coda in the film mentions that Bannon is now touring Europe in hopes of spreading them there), and part of the reason it happened is because of this romanticized liberal idea of debate; of giving evil a platform with very little to counter it beyond “Isn’t this ridiculous and scary!” Which, sure, but we already saw how this exact debate played out on a national scale, and Dharma is feature-length proof that Morris isn’t up to the task of wrestling with that reality yet.

American Dharma screened at the Toronto International Film Festival and opens on November 1, 2019.