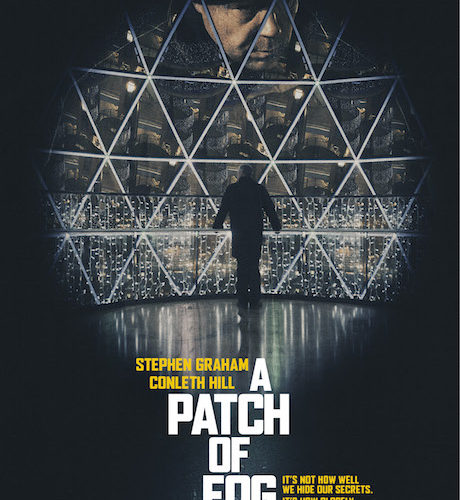 [TIFF Review] A Patch of Fog

After Michael Lennox’s success with the Oscar-nominated short Boogaloo and Graham, it was only a matter of time before he’d delve back into the feature game with his debut solo fiction. Scripted by John Cairns and Michael McCartney, A Patch of Fog possesses the type of intrigue and suspense that’s able to capture the attention of two grossly underused character actors in Conleth Hill and Stephen Graham. One plays a famous writer living off the royalties of the only novel he’s ever written (over two decades previous) and the other a department store security guard. Both prove depressed, lonely men seeking a rush present complacency won’t provide and they’re on a collision course.

The filmmakers drop us in with a brilliant opening that broods mystery. Hill’s Sandy is shown nervous and teary-eyed in his car, pulling on black gloves before setting his phone and making his way into a high-end shop. He deftly picks a pair of earrings off the shelf as his cell rings, putting the former in his pocket as the latter is removed. We’ve apparently met a criminal—albeit one so unsteady in this vocation that his hand won’t stop shaking despite a victorious smile. Who’d believe this same man would then minutes later turn up on Robert’s (Graham) television set to spar with a fellow intellectual about the week’s cultural art? The famous are apparently wanting.

It’s not long before the two meet face-to-face as Sandy’s adventurous nature leads him to Robert’s store. The guard is a hawk and keen to the thief’s maneuvering. Knowing exactly who Sandy is despite feigning ignorance, an exchange of services is rendered. Robert won’t call the police if the author will simply buy him a soda. We know it can’t be that easy, but we don’t quite believe just how far Robert will go to secure a friendship until the particulars of the deal are casually bloated and extended with a grin. What follows is a series of back and forth blackmail attempts as literati battles layman in a game much more serious than this type of story generally allows.

That’s not to say there isn’t comedy—how couldn’t there be when Graham reaches back to the sympathetic everyman of his Snatch days after a more recent dramatic turn in Boardwalk Empire? His Robert is perfectly creepy and endearing; you feel his sorrow as a person longing for human connection yet lacking the skills an authentic relationship demands. His job is his life and being it’s security and surveillance obviously ensures him an upper hand for most of their tumultuous courtship. Sandy only assumes he’s smarter, a fact that leads to multiple table-turning attempts fantastically blowing up in his face. Rather than culminate in a guffaw, though, we wonder how dire the aftereffects will prove.

As for Hill, the character of Sandy is similar to his role on Game of Thrones if less assured. While nothing seems to phase Varys, Sandy’s confidence isn’t quite as solid. He lives his life secretively with his penchant for shoplifting and a hidden romantic affair with his TV show’s moderator Lucy (Lara Pulver). This warped union with Robert must also remain private by necessity, but the multiple personas he projects to keep everything compartmentalized risk imploding as their convergence becomes inevitable. This is where an effective dark streak enters and we become helpless, bracing for a violent outburst.

While the machinations of their tit-for-tat aren’t necessarily new, the progression is effective thanks to these performances. Hill goes above and beyond on the conniving scale, reveling in his escalating rage until his post-rush high has him straight as an arrow. Graham conversely shines as a ball of emotion—a stereotypical jealous girlfriend threatening suicide if he doesn’t get his way. But the way he plays it isn’t manipulative as much as genuinely affecting. When Sandy shows even the smallest glimmer of attention or compassion, Robert’s soul is literally warmed and bursting. With that opening, however, comes the potential for crazier stunts neither will be able to shake.

Like a quality page turner, A Patch of Fog is the pulpy novel you could see Sandy writing. It would be a far cry from the “deeply moving” titular debut about to mark its twenty-fifth anniversary, but perhaps more attuned to who he is. The stealing can transform into research; the dangerous dynamic with an overbearing fan the perfect foil to work his intellect around for victory. While such noir sensibilities kill in fiction, though, real life is conversely filled with blunders. Sometimes these missteps lead to a revelatory escape, sometimes a deepening metaphorical grave, and others a solemn demise befitting the blackened hearts darkening our souls.