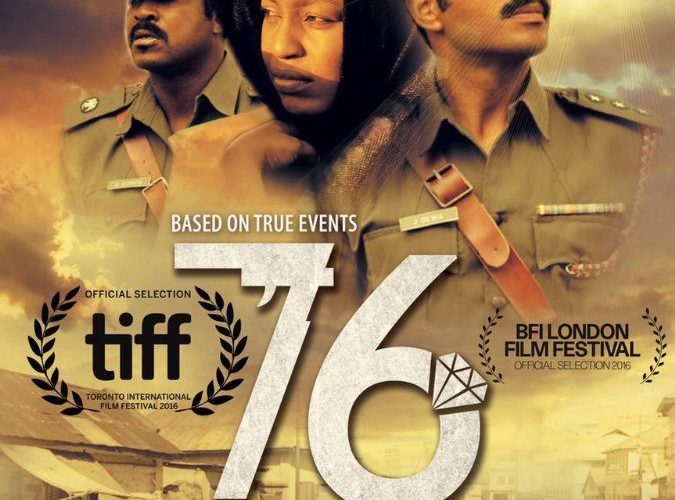 It appears my first foray into Nollywood (Nigerian cinema) was well selected being the latest from director Izu Ojukwu, one of the nation’s most ambitious artists. Add some heavy hitters in Ramsey Nouah, Rita Dominic, and Chidi Mokeme and ’76 delivers a wonderful sampler platter of the best talent this region has to offer. But don’t look at the genre and think Bollywood song and dance because Ojukwu’s film is a straightforward drama with historical significance and emotional gravitas. While it’s first and foremost a love story bridging a racial divide between expectant Suzy (Dominic) and her husband Captain Dewa (Nouah) — who’s already been disavowed by his in-laws — at its back exists a real life assassination plot on Communist General Murtala Mohammed that threatens to rip them apart. Nigeria is only six years removed from Civil War: a fight pitting Suzy’s father and brother against the current government for which Dewa serves honorably — save a domestic spat with a superior officer and his wife (Memry Savanhu‘s Eunice) next door for playing their music too loud. Even though Dewa is unwavering in his service despite harboring possible misgivings, there’s a rebellious contingent of peers looking to recruit him into their aforementioned plot. He doesn’t jump at the chance to join, but is made aware of who did and therefore proves a liability. Dewa hopes to educate those in power about what’s happening, but there are too many traitors in his midst to begin the process. Since recruitment didn’t work, these soldiers will instead try to silence him.

What follows is a tense journey traversing the claustrophobic army base Dewa can’t seem to escape. He has allies (Daniel K. Daniel‘s Corporal Obi is one), but grave consequences make trust difficult. Suzy’s brother sulks around their home, Aunty Mary (Ada Ofoegbu) is always present to help with the pregnancy, and the ever-smiling Captain V.M. Jaiye (Adonai Owiriwa) wields blackmail tactics to get desired answers. Dewa’s only concern is to get Suzy out of the compound so she can deliver the baby in peace, but the chaos can’t help driving a wedge between them at the worst possible moment. Seeds of doubt are planted in Suzy’s head as stress, time gaps, and her husband’s failure to keep promises has her questioning his motives when he needs her most. Ojukwu splits the movie into three acts, never stopping to ensure Dewa or Suzy is at the center of focus. Act One is about introductions, grounding us in this couple’s love while also setting the stage for what’s to come. Act Two runs concurrently with the coup and Dewa refusal to participate. He’s instead seeking a way out because he knows any failure to wrest away control of the country means he’ll be lumped in with the conspirators by proximity. And Act Three occurs in the aftermath with Suzy attempting to survive a world in which she may never she her husband again. The story is therefore always about their fates. Will their love prevail or is corruption too prevalent to combat? Maybe Suzy’s family was right about Dewa.

These characters are crucial to our investment because they’re good at heart despite losing their way on the path towards righteousness. There are many temptations whether Dewa’s compatriots looking to acquire his ID card to cement him as a member of the coup or Jaiye gradually chipping away at Suzy’s resolve so she begins believing her husband’s a criminal. We yearn to know how their relationship will progress even though the political turmoil should be more universally pertinent. But that’s not why we’re here. This isn’t some war epic about rebellious heroes succeeding or failing for their convictions. It’s about a husband and wife striving to survive outside forces in private and public seeking to destroy them. If true innocence can’t be upheld, what’s the point anyway? There’s an air of melodrama as performances fall prey to heightened reactions, but they ooze charisma to cancel any bad readings. Ojukwu shows his ambition with aesthetic choices that aren’t always successful, but definitely worthwhile in his never backing down from a challenge. At times we think he’s spliced in black and white archival footage with coarse artifacting and then a cast member is seen to confirm his attention to period-specific detail. We get a sense of the era and the tension post-war Nigeria brought its citizens. And we feel the suspense of Dewa standing against a handful of rebellious sympathizers while Suzy’s emotional roller coaster watches one life born and another taken away. The current regime’s guilty until proven innocent sentiments never bode well for hope.

The story itself can be disorienting at times with screenwriter Emmanuel Okomanyi often letting something happened in a way that makes us feel we’ve missed a crucial detail, but this confusion actually drew me in. It’s as though the punch line arrives before the joke: Why is this character lying? What woman is in those damning photographs? Where could Dewa’s ID card have gone when we know the one opponent with access didn’t take it? These added mysteries keep our focus on the characters and their reactions. Even though the coup’s ramifications are devastatingly broad with secret police-type abuses of power, we’re only interested in Dewa and Suzy’s innocents dragged into the fray. Through them we witness the uncertain danger faced during this precarious chapter of Nigeria’s past.

’76 is currently playing at the Toronto International Film Festival.