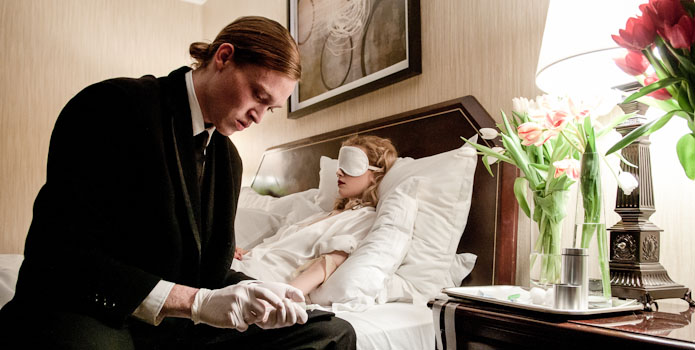 In the last major update for the Toronto International Film Festival 2012 slate, they’ve announced their Canadian features. The line-up includes Sarah Polley’s upcoming documentary Stories We Tell, coming off her Take This Waltz this summer (which also premiered at TIFF). The other major films include two we’ve seen at Cannes,one being Brandon Cronenberg‘s Antiviral, which premiered alongside his father’s Cosmopolis. We disliked it (full review), saying it came off as an “an amateurish, high-budget student film.” The other major title is Xavier Dolan‘s Laurence Anyways, which we loved (full review), calling it a major step forward for the filmmaker. Check out the rest of the titles below, which I’m sure will include many discoveries.

Antiviral Brandon Cronenberg, Canada/USA North American Premiere
Syd March is an employee at a clinic that sells injections of live viruses harvested from sick celebrities to obsessed fans. When he becomes infected with the disease that plagues superstar Hannah Geist, he must unravel the mystery surrounding her before he suffers the same fate. Starring Caleb Landry Jones and Sarah Gadon.

Inch’Allah Anaïs Barbeau-Lavalette, Canada World Premiere Chloe is a young Canadian obstetrician working in a makeshift clinic within a Palestinian refugee camp in the West Bank where she treats pregnant women under the supervision of Michael, a French doctor. Facing daily checkpoints and the separation barrier, Chloe is confronted with the conflict and the people it affects. Her encounter with the war draws Chloe into an adventure that’s both deeply personal and as large as the land. From the producing team behind Academy Award®-nominated Monsieur Lazhar and Incendies.

Laurence Anyways Xavier Dolan, Canada Toronto Premiere In the 1990s, Laurence tells his girlfriend Fred that he wants to become a woman. In spite of the odds — and in spite of each other — they confront the prejudices of their friends, ignore the counsel of their families, and brave the phobias of the society they offend.
For ten years, they try to live through this transition, and embark on an epic journey which, unbeknownst to them, may cost Fred and Laurence their love. Starring Suzanne Clément and Melvil Poupaud.

Liverpool Manon Briand, Canada Toronto Premiere A coat check attendant in a bar decides to take an unclaimed coat back to its owner, but soon finds herself in the middle of criminal intrigue. A regular of the bar has long harboured a secret love for the attendant — enough to put his life on the line to help her. Starring Stéphanie Lapointe, Charles-Alexandre Dubé and Louis Morissette.

 Rebelle Kim Nguyen, Canada Toronto Premiere Komona, a 14-year-old girl, tells her unborn child the story of how she became a child soldier. A tale set in Sub-Saharan Africa, Rebelle is also a love story between two young souls caught in a violent yet beautiful and magical world. Starring Rachel Mwanza (winner of Silver Bear for best actress at Berlin International Film Festival), Alain Bastien and Serge Kanyinda.
Still Michael McGowan, Canada World Premiere Based on true events and boasting a veteran cast, Still is a heartfelt story about an 89-year-old New Brunswicker (James Cromwell) who faces jail time when the government tries to stop him from building a more suitable house for his wife (Geneviève Bujold), whose health is beginning to fade.

Stories We Tell Sarah Polley, Canada North American Premiere In this inspired, genre-twisting film, Academy Award-nominated writer/director Sarah Polley discovers that the truth depends on who’s telling it. Polley is both filmmaker and detective as she investigates the secrets behind a family of storytellers. She playfully interrogates a cast of characters of varying reliability, eliciting refreshingly candid, yet mostly contradictory, answers to the same questions. As each relates their version of the family mythology, present-day recollections shift into nostalgia-tinged glimpses of a lively, fun-loving past and the shadows just beneath. Polley unravels the paradoxes to reveal the essence of family: a messy, intense and loving tangle of contradictions. Blackbird Jason Buxton, Canada
An alienated teenager’s online threat ignites fear in a small community, in this disturbing and perceptive look at how our media-fuelled, post-Columbine culture can transform typical teen angst into intimations of murder.

Krivina Igor Drljaca, Canada World Premiere Miro, an immigrant from the former Yugoslavia, lives in Toronto. He has a hard time relating to others and he never stays in one place for too long. When he finds out that his pre-war friend Dado, who has been missing for almost two decades, is now wanted for war-era crimes, his life starts to unravel. Upon hearing that Dado still visits Zljebovi, a village on the outskirts of Sarajevo, Miro embarks on a trip to Bosnia to find his friend.

Picture Day Kate Mellville, Canada World Premiere Forced to repeat Grade 12, Claire’s reputation is sliding from bad-ass to bad joke. At night, she escapes to would-be rock star Jim (aged 33), while at school, she bonds with Henry, a nerdy freshman she used to babysit. Eventually, Claire learns the difference between sex, intimacy and friendship.

Tower Kazik Radwanski, Canada North American Premiere Kazik Radwinski’s debut feature Tower is about a single and career-less man who lives at home with his parents in Toronto. He wanders alone in search of companionship and suddenly finds himself in an intimate relationship. Irritated by a raccoon that tears up his garbage, he sets out to catch it.

Camion Rafaël Ouellet,  Canada Toronto Premiere
After being involved in a road accident causing the death of a woman, truck driver Germain’s world collapses as he feels an overwhelming sense of guilt and remorse. His state of mind starts to worry his younger son Samuel, who puts his own janitor job in Montreal on hold to track down his older brother, drifter Alain, in New Brunswick, hoping to head back together to their hometown to give some support to their father.

 The Crimes of Mike Recket Bruce Sweeney, Canada World Premiere Bruce Sweeney (Last Wedding) returns to the Festival with this neo-noir police procedural — set against the backdrop of economic hard times — about a failed real estate agent (Nicholas Lea) whose recent attempt to turn things around makes him a suspect in a criminal investigation.

Home Again Sudz Sutherland, Canada World Premiere
Home Again is about three adults raised “foreign” (in the USA, United Kingdom and Canada) from childhood and deported back to their birth country, Jamaica. Back “home” each discovers a different Jamaica from the paradise in vacation ads. We follow these three deportees on a journey for survival that surprisingly is filled with hope.

I Declare War Jason Lapeyre and Robert Wilson, Canada A group of friends play an innocent game of capture the flag in the neighbourhood woods, arming themselves with nothing more than sticks, their imagination and a simple set of rules. One afternoon, the game takes on a more serious tone and the quest for victory pushes the boundaries of friendship, giving the would-be warriors a glimpse of the darker side of human nature. To win back his unsatisfied ex-girlfriend, conservative accountant Jordan Abrams enlists the help of Julia — an uninhibited exotic dancer — to guide him on a quest for sexual experience, leading him into a world of strip clubs, sensual massage parlours, cross- dressing and S & M.

Tout ce que tu possèdes (All That You Possess) Bernard Émond, Canada
 A disgruntled academic refuses a substantial inheritance because the fortune was amassed dishonestly. Soon after, he is reunited with  his teenage daughter whose mother he had abandoned when she was pregnant. From the filmmaker responsible for La donation and  La neuvaine.

Previously announced in the Masters programme: Peter Mettler’s The End of Time.

Revolution Rob Stewart, Canada
The much anticipated follow-up film from the filmmakers of internationally acclaimed, box office hit Sharkwater, Revolution follows Rob Stewart on an adventure from photographer/filmmaker to environmental activist trying to change the world. Stewart faces danger, conflict and drama in his struggle to find the key to empowering the conservation movement so it can affect change on a global scale.