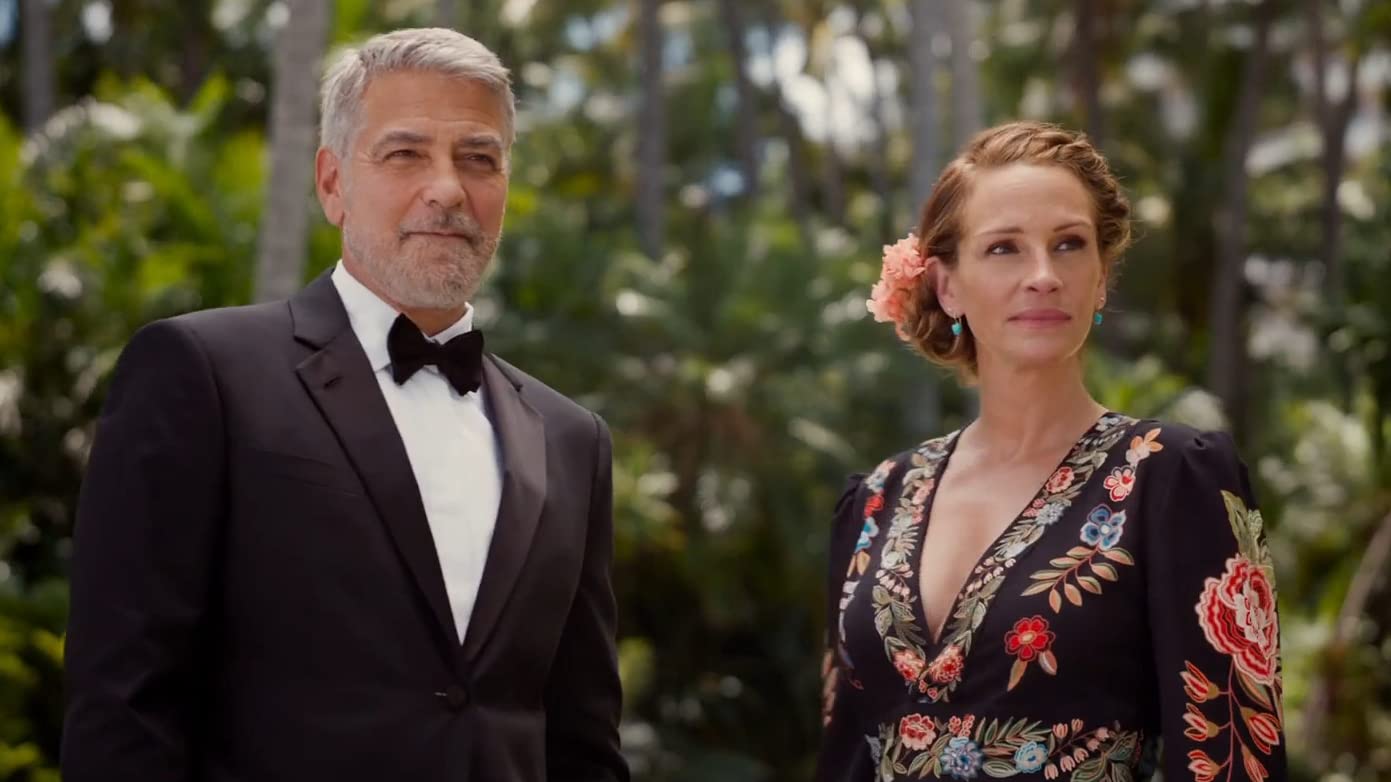 2022 has been the year of the big-screen romantic comedy resurgence. But while audiences may have been reminded of the joys of the high-concept, star-driven genre thanks to the likes of Marry Me and The Lost City, the year’s final rom-com blockbuster serves only to remind the general public why they got fatigued in the first place. Ticket to Paradise represents the genre at its laziest, coasting by on the natural chemistry between its two beloved lead stars, who eventually struggle to mine any humor from a script that quickly prioritizes unearned sentimentality over genuine laughs.

After two decades of avoiding any and all contact with each other, former married couple David (George Clooney) and Georgia (Julia Roberts) are begrudgingly thrown together to attend the college graduation ceremony of their daughter Lily (an oddly under-utilized Kaitlyn Dever). They vow never to see each other again, a promise broken just a few weeks later after getting the news that Lily has quickly become engaged to a man she met on her vacation in Bali. Immediately flying overseas to attend the nuptials, both parents are adamant to break up the relationship, lest their daughter repeat the same mistakes as them—but of course, this is a romantic comedy, so as the bickering pair spend more time together, they start reminiscing about the good times, and grow closer together again. It’s basically a globetrotting It’s Complicated, albeit with the grounds of a five-star hotel becoming the signifier of upper-class opulence to replace the immaculately designed kitchens of the typical Nancy Meyers movie.

Director Ol Parker (following up his previous film about rich white people on a luxury vacation, Mamma Mia: Here We Go Again) has stated that he would have abandoned his screenplay, co-written with Daniel Pipski, if both Clooney and Roberts had turned their roles down. In such regard Parker’s instincts were entirely correct, albeit in a way that’s damning to his own screenwriting abilities; Daniel and Georgia feel noticeably undercooked, the only glimpse into their inner lives being endless cutting conversations about their relationship which ended nearly 20 years prior.

In the first act this provides both stars with plenty of opportunity to banter with each other, their lived-in, screwball-adjacent comic chemistry helping to land jokes that are barely formed on the page. As soon as their plane touches down in Bali, however, it quickly becomes clear the film is coasting by on the strength of their well-worn screen partnership, the pair both so well equipped to bicker and banter with each other that they’re on autopilot as much as the film around them. There are only so many sharp jabs the characters can make at each other before it becomes too obvious how one-dimensional they are, still defined by their long-finished relationship on the page even if everything about their characters should suggest otherwise.

Rather than bringing to mind any number of the near-canonical romcoms in which Roberts forged her screen persona, what Ticket to Paradise most resembles is her less-than-revered 2010 vehicle Eat, Pray, Love. This is similarly a film designed as an escapist getaway, where foreign nations are viewed entirely through their five-star hotels and major tourist attractions, and any character growth happens in a locale accessible only to the most privileged. And it largely overlooks any character native to its setting, including the Balinese love interest played by Maxime Bouttier; it’s no secret that his engagement to Daniel and Georgia’s daughter is little more than a MacGuffin to throw the pair together, but it’s remarkable just how little interest the movie shows in the immediate world beyond them even as it drives the narrative forward. It exists purely as a feature-length commercial for the Bali tourist board, and has even received the endorsement of Indonesia’s Tourism Minister, who has stressed that he hopes Ticket will welcome international visitors back to the island—even it was shot almost entirely in Australia.

This tired nature extends all the way to the end credits, which treats audiences to a seemingly never-ending blooper reel, featuring a customary shot of a cast member pranking Clooney by showing up on set in a Batman costume. This in a studio comedy wouldn’t usually be worth referencing, were it not for the fact that Parker was adamant he wanted one due to how much fun the cast were having on set. It makes the whole affair feel like forced fun, the cinematic equivalent of a work outing where the boss is trying to make everybody feel comfortable in letting their hair down, and only succeeding in highlighting that even with advanced planning in their favor, making a genuinely funny blooper reel is a near-impossible task.

Watching the end credits roll, I thought of critic Mark Kermode’s theory about comedy films: the more fun it looks like the actors had making it, the more insufferable it becomes as an audience member. In those final moments of Ticket to Paradise he was proven absolutely correct.

Ticket to Paradise is now in U.K. theaters and opens in the U.S. on October 21.