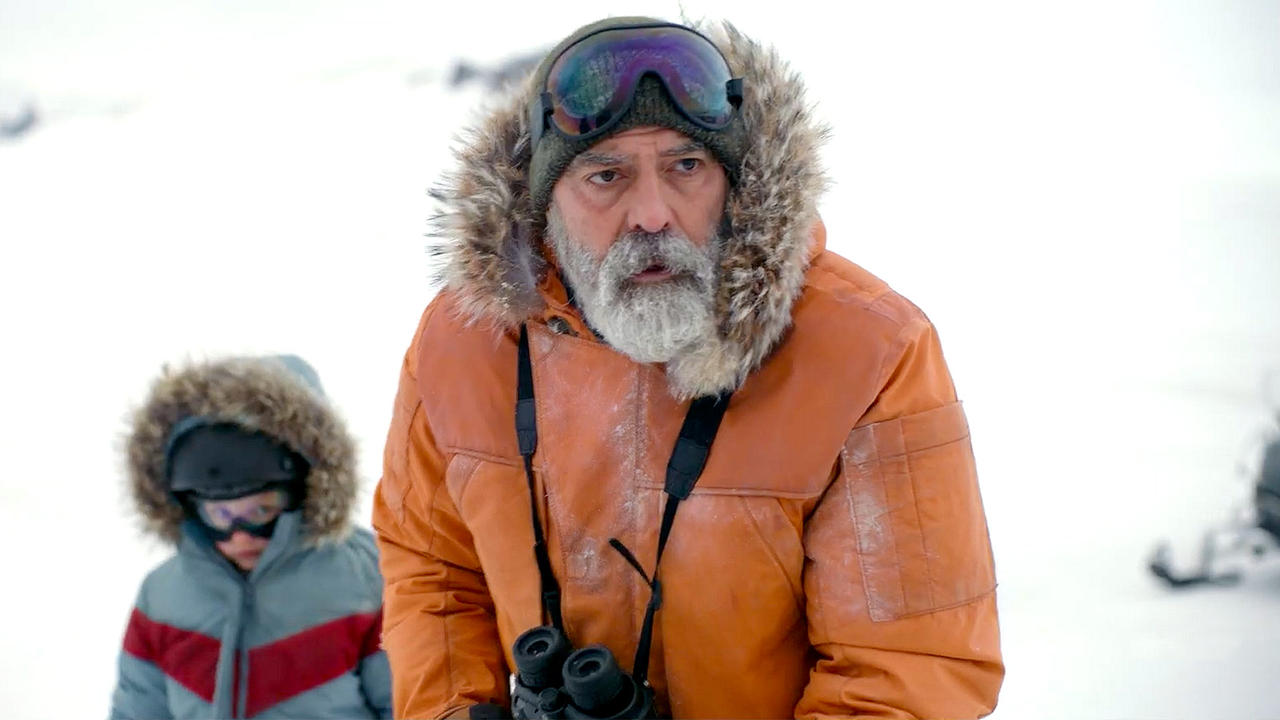 Since the release of Gravity in 2013, George Clooney has been in quite the acting slump, with Brad Bird’s severely underrated Tomorrowland as the lone bright spot. Scan his IMDb page and he appears to have made more Nespresso-funded short films than studio features, albeit for altruistic causes. (Get that money, king.) The directorial projects (The Monuments Men, Suburbicon, and two episodes of the television mini-series of Catch-22) have been even direr, a far cry from the glory days of Good Night and Good Luck and The Ides of March.

Considering its pandering weightiness and saccharine heart, Clooney’s The Midnight Sky feels like a blatant attempt to get back in the good graces of unadventurous critics and Oscar voters. Adapted from the novel Good Morning, Midnight by co-screenwriter Lily Brooks-Dalton, it envisions our planet’s last gasp through the glassy, sad eyes of world-renowned scientist Augustine Lofthouse (Clooney). Afflicted with a mortal ailment, he has decided to stay on Earth while what’s left of mankind evacuates for new habitation on one of Saturn’s life-giving moons.

In the cold, blue-hued opening moments, Clooney (the director) follows Clooney (the suffering, bearded star) through an evacuated Arctic observatory. He survives off transfusions of blood and whiskey respectively. This is conveniently one of the final places unaffected by massive radiation clouds spreading across the globe. An exact cause for this massive dystopian event is never made clear, but such ambiguities are merely cover for a far more conventional approach to genre and character.

Augustine’s self-medicating descent toward death becomes upended by the appearance of a small girl named Iris (Caoilinn Springall) seemingly left behind by accident. From here, The Midnight Sky splits into a dual narrative, introducing astronauts aboard a spaceship returning to Earth after completing a two-year exploratory operation. The diverse crew––played with noble conviction by David Oyelowo, Felicity Jones, Demian Bichir, Kyle Chandler, and Tiffany Boone––is unaware of the catastrophe occurring on the Earth’s surface.

Of the two juxtaposed stories, Augustine and Iris’ survival yarn is far more interesting. Their trek through unforgiving snowstorms toward a satellite with longer-range capabilities gives Clooney’s otherwise inert compositions space to breath, and a level of environmental volatility that creates something close to tension. One icy sequence involving a sinking shipping container is genuinely scary, and conveys how quickly one’s potential for hope can get submerged.

The astronauts experience a far more reductive version of the classic sci-fi disaster film; after their ship is inexplicably pushed off course they must travel through a stretch of uncharted space. That’s never good for your health, especially those unlucky few who must space walk to fix downed radar systems. But Clooney does afford them a chance to sing “Sweet Caroline” to the entire galaxy, because why not.

The Midnight Sky connects its divergent threads through their mutually desperate attempt to communicate with each other, building toward a cheap twist/payoff that would mortify even M. Night Shyamalan. The film’s ridiculous revelations speak volumes about Clooney’s riskless, lowest-common-denominator approach to potentially complicated themes of regret and denial.

All in all, the film is a huge letdown coming from conceivably one of Hollywood’s most powerful stars. Even more disconcerting, The Midnight Sky proves that Clooney seems content creating toothless, self-serious content that will be forgotten almost immediately, and that doesn’t bode well for his legacy. Mr. Pitt, please show your friend Ad Astra, stat.

The Midnight Sky is now in theaters and arrives on Netflix on December 23.