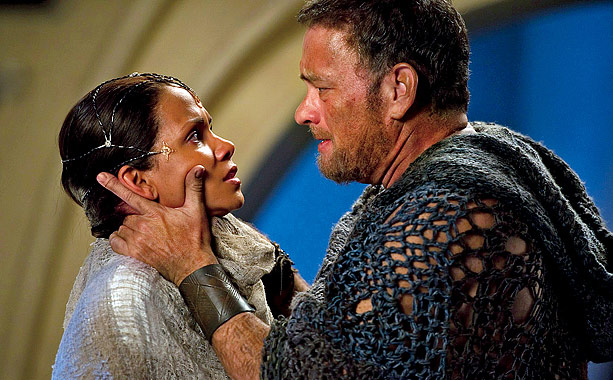 Update: The film just screened in Toronto. Check out impressions below after the trailer and come back for our full review.

Following an epic six-minute look at  Wachowskis and Tom Tykwer‘s ambitious undertaking of Cloud Atlas, WB has released a standard, two-and-a-half minute trailer for the film. Based on David Mitchell‘s novel, spanning multiple time periods over a thousand years, with actors playing multiple characters, this is high up on my most-anticipated films of the year list. We’re given a condensed preview of the six different time periods and stories including a Pacific Ocean voyage, an English musician in 1930s Belgium, a journalist in 1975 Buenas Yerbas, California, a present day London gangster story, a clone story in a future Korea and then finally, a post-apocalyptic Hawaii.

The longer look was definitely necessary as the one feels quite rushed in comparison, but we still get a look at some new scenes and shots here and there. Premiering at Toronto International Film Festival this weekend the ensemble stars Tom Hanks, Halle Berry, Jim Sturgess, Susan Sarandon, Ben Whishaw, Jim Broadbent, Hugh Grant, James D’Arcy, Keith David, Bae Doona and David Gyasi. Check out the trailer and new poster below or over on Apple in HD.

CLOUD ATLAS (Cooks in the Kitchen): Not even its enormous failures are interesting. Unredeemably bad. And long. #TIFF12

Blown away by the scale and scope of CLOUD ATLAS. Brilliant on so many levels. Absolutely loved it. While every studio and most filmmakers play it safe, CLOUD ATLAS is a shining light reminding us what’s possible in cinema.

CLOUD ATLAS (B+): Lots to quibble with, esp. on the yellowface front, but it’s a movie of big ideas, and only a few of them are terrible.

CLOUD ATLAS is remarkable for scope and ambition. Having just read the book, it’s difficult not to judge through adaptation lenses. #TIFF Wow. I don’t care if I’m alone on this one, but I’m surprised at the instant knee-jerk dismissal of one of my favorite films this year.

CLOUD ATLAS (Tykwer/Wachowskis, C) Obliterates the book’s nesting-doll structure in favor of a symphonic fiasco of artistry and tackiness.

Cloud Atlas is an absolutely brilliant adaptation… but will anyone who hasn’t read the book connect with such a strange premise? #tiff12

CLOUD ATLAS: I was jealous of the man snoring next to me. F- to infinity. Full stop.

Not an emotional punch, but Cloud Atlas is mesmerizing start to finish thanks to juxtaposition of grand themes, acting & images. I think the editing and performances in Cloud Atlas are brilliant. Watching great actors jump from character to character is a joy. Cloud Atlas is good election season fodder. Power figures demanding complacency to societal rules, others fighting back for humanity. #TIFF12

Will be easy to think SOUTHLAND TALES or DUNE for 1st half of CLOUD ATLAS, but I think it evolves into a very important, even inspiring work. CLOUD ATLAS is a film that demands patience. Patience that many moviegoers probably don’t possess. But it pays off beautifully. #tiff12

CLOUD ATLAS is like the MATRIX trilogy in micro – starts absolutely brilliantly, then a slog. #TIFF12 CLOUD ATLAS is like a combination between PHANTOM MENACE and JOHN CARTER, except worse. It’s even worse than the third MATRIX movie.

Cloud Atlas – A cinematic revelation. Pulled it off. THIS is the movie of the year. Pushes boundaries of storytelling. More than PTA. Wow! Cloud Atlas wins Best Makeup hands down. It will not be loved by all, but it pushes the audience to embrace the brilliance within it.

CLOUD ATLAS: Art + awe. Remarkable as much for its colossal ambition as for its high-wire narrative and lush visuals.

CLOUD ATLAS is dense, grandiose, human spectacle with messages both big and small. Technical wow that has issues, but stays worthy. #TIFF12

CLOUD ATLAS is five or six movies interrupting each other. #tiff12

Cloud Atlas – Had great expectations going in; still digesting the movie. Best way i can describe the movie right now is meh. #TIFF12 Cloud Atlas is one of the truest epics I have ever seen. The fuck did I just watch.

3 hours later, and cloud atlas is the single greatest cinematic experience I’ve ever had.

Cloud Atlas was fantastic! Congratulations to all who had a hand in making this film! #TIFF12 @tomhanks

CLOUD ATLAS: I totally enjoyed it. It’s totally crazy and has dangerous levels of daft. I hope they were intentional.

Amazed by the audacity and beauty of Cloud Atlas, but tough to digest in one sitting. Likely requires multiple viewings. #TIFF12

CLOUD ATLAS is generously stuffed with exciting images & ideas, most of which work on some level. Even when it falters it’s still formidable

CLOUD ATLAS=ultimate cheeseball (meant in the nicest of ways, honestly). Sequences “borrowed” from some great films (and some not-so-great).

CLOUD ATLAS (Wachowski, #TIFF): Unfortunately, I cannot tell you how bad Cloud Atlas is–you have to see it for yourself. Cloud Atlas (book) was a complex layered story. The narrative can be hard to follow, but worth it. The movie is the same. #TIFF12

CLOUD ATLAS (B) 6 movies in one, none of them great, most of them at least okay. Some choices don’t pan out, and the film strains…for poignancy, but damned if CLOUD ATLAS isn’t an impressive feat of plate-spinning. Like second half of INCEPTION for three hours.

CLOUD ATLAS is the best, most uncommercial movie you’ll see for years. In the credits still learning how monumental it was.

I really admire the effort behind Cloud Atlas, but, boy, I felt almost every minute of its running time. And speaking as someone who didn’t care much for Cloud Atlas, I’d still recommend it because it’s quite remarkable as a spectacle. #tiff12

Cloud Atlas is amazing. And confusing. You’ll need to watch it more than once. #TIFF12

Cloud Atlas will inspire good post-viewing conversation. Remember what it was like after you saw the Matrix the first time? Like that. #TIFF

Wow, super long standing ovation at the premiere of Cloud Atlas!Remarkable piece of work, am huge fan of the book so really enjoyed #TIFF12

Cloud Atlas: I adored the book, & was enjoying reliving it. Huge achievement in filmmaking. But unsure if it really makes sense as a movie

Just got out of a screening of Cloud Atlas. Mind still buzzing. Not sure what to think. #TIFF12

CLOUD ATLAS is greater than the sum of its parts, and its parts are pretty terrific. #tiff12 #cloudatlas

Adored CLOUD ATLAS. Deft interweaving of six stories, and sincere as all get out. Might annoy some, but I felt every big emotion was earned.

Cloud Atlas was superb, I loved it!

Cloud Atlas was such a wonderful film. I’m in love with it. My choice thus far for picture of the festival. #TIFF12

Cloud Atlas keeps so many balls up in air at once have to admire its audacity. Lots to admire, some things to quarrel with, but a must see.

CLOUD ATLAS: Think INTOLERANCE if Griffith was on LSD. Never a dull moment. Actors have a ball in multiple roles. More TK. #TIFF12

Cloud Atlas has the best geriatric escape scene from a drag Hugo Weaving EVER. #TIFF12

I feel reasonably safe in saying that CLOUD ATLAS is the most ambitious film I’ve ever seen.

Excuse me while I spend the next three hours processing Cloud Atlas.

Follow our complete TIFF 2012 coverage by clicking the image below: