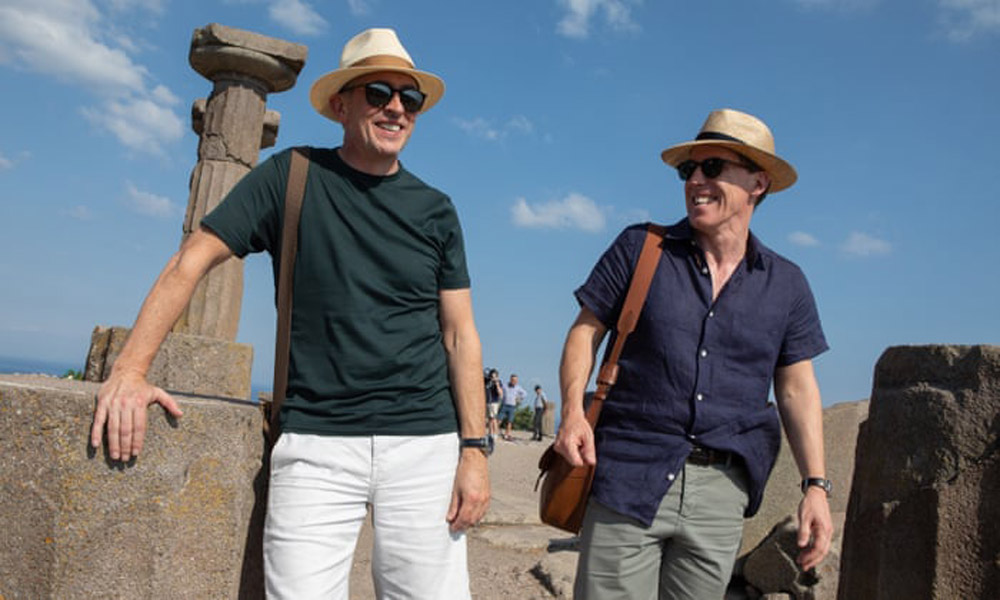 When embarking on their first trip, Steve Coogan, Rob Brydon, and Michael Winterbottom weren’t aware their journeys would extend for the next decade, but from the first few scenes of their tour through northern England, the stage was set for what we’ve come to cherish from these outings. There will be slightly fictionalized barbing, an array of impressions besting the most popular YouTube comedians, gorgeous locales, delicious food, and some slight drama to give the semblance of a narrative arc. For their final adventure, The Trip to Greece, they stay the course with this tried and true formula, making for a satisfying finale while still leaving room for contemplation.

Picking up a few years after the rather unexpected ending of 2017’s The Trip to Spain-which found Coogan in the middle of the desert with potential danger approaching–Winterbottom gives only the briefest lip service to how that situation was cleared up. Back with Brydon, Coogan is now safe, sound, and still as self-obsessed as ever. This time, the sardonic duo are embarking to the Hellenic Republic as they follow the path of Homer’s Odyssey. It’s not just because of the shared location that one may have recollections of Before Midnight throughout as personal reflections on aging and relationships find their way into a series also built on a heightened version of reality. Over lavish meals of lamb and seafood, they chat both about ancient and recent history, from Aristotle and the Greek origins of Nike to the reception to Stan and Ollie, starring none other than Coogan. In one of the film’s most amusing jibes, Brydon cheekily reveals he only paused his BAFTA screener three times to go to the kitchen. As they discuss measures of success, criticism, and performance, it’s clear the same issues are still on the minds of these two conceited entertainers, and thankfully, their sparring hasn’t gotten stale quite yet.

With no shortage of impressions on display, from Dustin Hoffman to Jon Voight to Ray Winstone to Laurence Olivier to a stellar approximation of dubbing by Coogan as Godzilla, there are plenty of laughs to be had, but as has been creeping up in the series, Winterbottom is keen to direct an eye towards more pressing issues. It’s not all glamorous seaside respites as we see the influx of refugees in the country when the pair visits a nearby camp. Further exploring the narcissism of these characters, we witness them attempting to skirt a situation that would reveal the hardships of an ever-growing, downtrodden population around them, rather continuing on their low-stakes journey of privilege, being compensated to bathe in luxury. Contrasting the sunny, ebullient vistas, there are also congested hubs of commercial ships and cruises, revealing the economic realities not often the spotlight of vacation advertisements. Cinematographer James Clarke also makes the heaviest use yet out of drone photography for this series, which is fitting for a travelogue such as this.

We won’t spoil how this four-film franchise ends, but it’s a fitting way to say goodbye to these fictionalized versions of Coogan and Brydon, who exhaust as much as they entertain. The narrative might get a touch too solemn, injecting a bit of reality when it comes to unanticipated hardships, but some welcome closure is offered without tying things up with a neat bow. In a time when much of the world’s population is doing their part to stay home in order to save lives with no vacation in sight, The Trip to Greece offers a ticket to temporary escape. Four expeditions in, one does wonder where their conversations could go if they were to bring their passports back out, but as it stands now, this sign-off is a delectable ode to friendship, performance, and exploration–as well as how a decade-long franchise can be sustained with the simplest of pleasures.

The Trip to Greece arrives on Friday, May 22.