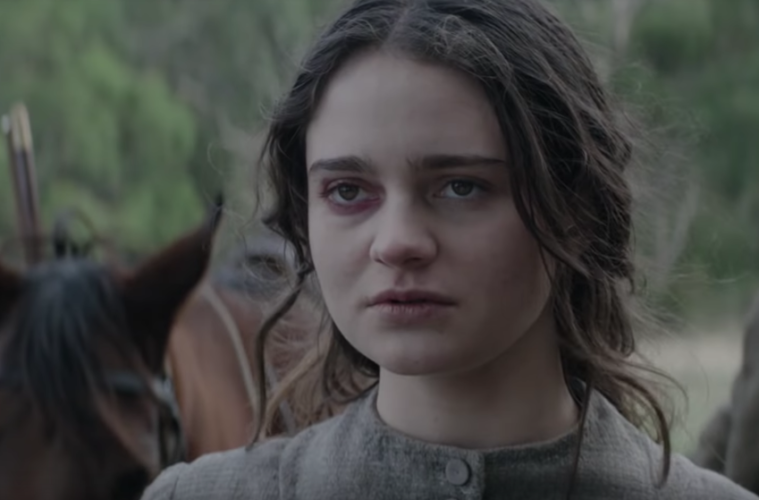 After her revelatory and harrowing feature The Babadook heralded Jennifer Kent to international acclaim, expectations have been high for her second feature and what horrors and thrills she would again unleash to unsuspecting audiences. As an official selection of the Venice Film Festival (winning the special Jury Prize) and Sundance, The Nightingale will now arrive in theaters this August via IFC Films, and the first trailer has landed.

Set in 1825 in the Australian Tasmanian Outback, Clare (Aisling Franciosi), an Irish convict, has served her abusive master (Sam Claflin) for seven years and refuses to free her from his charge. As a result, an act of horrific violence ensues against her and her family and she vows vengeance against him and his cronies, with the aid of an Aboriginal Tracker Billy (Baykali Ganambarr) to find him to enact her revenge.

Leonardo Goi in his review wrote, “Jennifer Kent’s The Nightingale features some of the most atrocious on-screen violence in recent memory. It is a cauldron of blood, murders, and rapes so unflinching in vividness and brutality as to make it impossible to go through its 136 minutes without ever turning away from the screen, let alone to come out of it untouched. But it is also, in a way that’s indissolubly bound to role that violence plays in Kent’s work, and to the depiction she offers of it, one of the most memorable works in its genre – a parable that never turns violence into a spectacle, but is resolutely committed to expose the poisonous double prism of racism and sexism it feeds upon.”

THE NIGHTINGALE is a meditation on the consequences of violence and the price of seeking vengeance. Set during the colonization of Australia in 1825, the film follows Clare (AISLING FRANCIOSI), a 21-year-old Irish convict. Having served her 7-year sentence, she is desperate to be free of her abusive master, Lieutenant Hawkins (SAM CLAFLIN) who refuses to release her from his charge. Clare’s husband Aidan (MICHAEL SHEASBY) retaliates and she becomes the victim of a harrowing crime at the hands of the lieutenant and his cronies. When British authorities fail to deliver justice, Clare decides to pursue Hawkins, who leaves his post suddenly to secure a captaincy up north. Unable to find compatriots for her journey, she is forced to enlist the help of a young Aboriginal tracker Billy (BAYKALI GANAMBARR) who grudgingly takes her through the rugged wilderness to track down Hawkins. The terrain and the prevailing hostilities are frightening, as fighting between the original inhabitants of the land and its colonisers plays out in what is now known as ‘The Black War.’ Clare and Billy are hostile towards each other from the outset, both suffering their own traumas and mutual distrust, but as their journey leads them deeper into the wilderness, they must learn to find empathy for one another, while weighing the true cost of revenge.

The Nightingale opens on September 2.