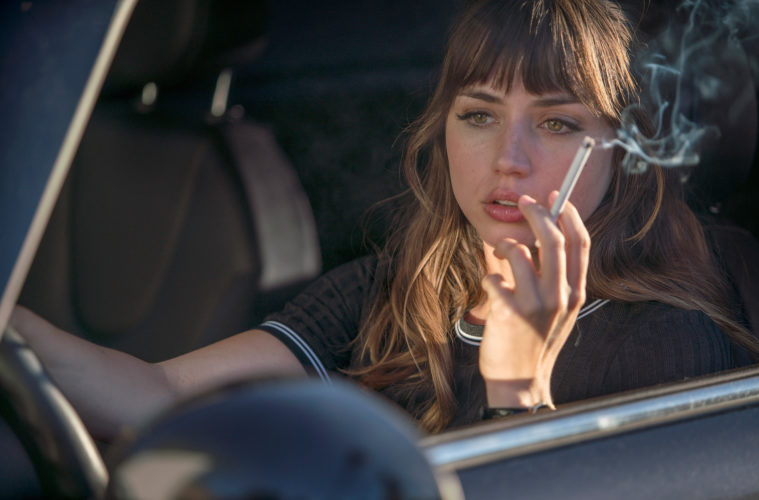 There’s a scene in Michael Cristofer’s The Night Clerk where lead character Bart Bromley (Tye Sheridan) misreads a situation and kisses a woman. His Asperger’s kicks into overdrive, merging a contrite apology with verbal self-flagellation before promising to never do anything so misguided and potentially damaging again. Impulse conquered conditioning for a split second and he’s ready to retreat so far within himself that he’ll never go out in public again thanks to shame—something that wouldn’t be too difficult since he’s already exiled himself to his mother’s basement and only leaves when it’s time to work his evening shift at the local hotel. It’s a very human reaction dialed to eleven and yet seemingly out of character considering he also records people without permission inside their rooms.

Cristofer says he got the idea for this film after thinking about the impact of new, cheap spy technology in context with a nephew on the Autism spectrum. It’s an intriguing idea taken in an equally intriguing direction as far as allowing Bart the benefit of the doubt where it comes to filming people as a means to study their “normal” behavior. He’s not some sexual deviant looking at these unsuspecting patrons through a lens of porn. He’s pausing and repeating their words to become familiar with their colloquialisms and adopt a comfort level with which to use them in his own daily life. That’s the goal: be less awkward. Bart is self-aware where it concerns people judging him and is being proactive to hopefully flip the script.

That’s your character study right there. Let’s watch his quest to improve his participation in social situations and experience the success and failures of doing so through morally questionable means. Let’s confront the psychology that allows him to beat himself up for a misstep in real life while completely ignoring the ramifications of what he’s doing on his computer. Bart is fascinating because of this desire to practice and improve—to cater to an outsider perspective and bend to the whims of those who rarely give him the time of day to earn a voice. It’s why Andrea (Ana de Armas) captivates us with her wealth of empathy. She understands Bart’s crisis because she knows how Autism affected her brother. There’s room for authentically compassionate drama.

The Night Clerk doesn’t, unfortunately, think that’s enough. Cristofer chooses to add a murder into the mix without recognizing how doing so completely undercuts his character’s motivations. Rather than augment Bart’s sense of confusion and his separation of intimacy from privacy, it pushes a generic thriller that’s itself devoid of drama. Who he is as a person suddenly becomes irrelevant. It doesn’t matter that he has Asperger’s anymore. That’s not why he decides to hide concrete evidence that proves his innocence in the case of the dead body found with him sitting beside it. No, it’s fear of being caught as a voyeur. So he does all he can to hide that truth from the cops (John Leguizamo) all while helping their case against him as a suspect.

How can there be stakes then if he literally holds the key to his innocence? We want him to be arrested because it would force him to give up his hard drive and admit to the lesser crime in order to exonerate himself from homicide. We’re therefore treading water for the final hour of the film’s 90-minute runtime knowing this supposed main threat (false imprisonment) is his best avenue towards salvation. So say goodbye to suspense. Say goodbye to the potential for a healthy character study that looks at Autism as more than a punch line (the film is punctuated by moments intentionally playing his bluntness for LOLs). The only segments of worth are those between Bart and Andrea because she treats him like a human.

It shouldn’t surprise you then that those are diminished too by a subplot wherein her intentions might not be fully above board. That leaves Bart alone on his island again, trying to reconcile his guilty addiction to record strangers, his increasingly unrequited love for Andrea, and survival instincts causing more trouble than good. And because Crisofer’s script tells us how smart Bart is at every turn (the disorder causes the world to “underestimate” him), it becomes impossible to continuously accept his inability to see he has the power to end this entire ordeal. This proves an especially egregious move on behalf of the filmmaker since his climax hinges upon the character recognizing exactly that. His Asperger’s is thus nothing more than a means to superficially prolong the inevitable.

A less is more mindset would have done a lot of good since meeting Bart on his own complex terms is infinitely more valuable than a murder that doesn’t need solving. It’s one thing to have it happen with an air of mystery so Bart must use his mind to find the real killer, but that’s never the case here. We know what happened. Bart knows what happened. So pretending its drama is more worthwhile than watching him discover he no longer wants to be alone thanks to his relationship with Andrea is just that: pretend. Sheridan lends his role the necessary nuance it deserves and de Armas imbues hers with a wealth of unspoken pain, but neither effort receives its payoff. The film conversely squanders both instead.