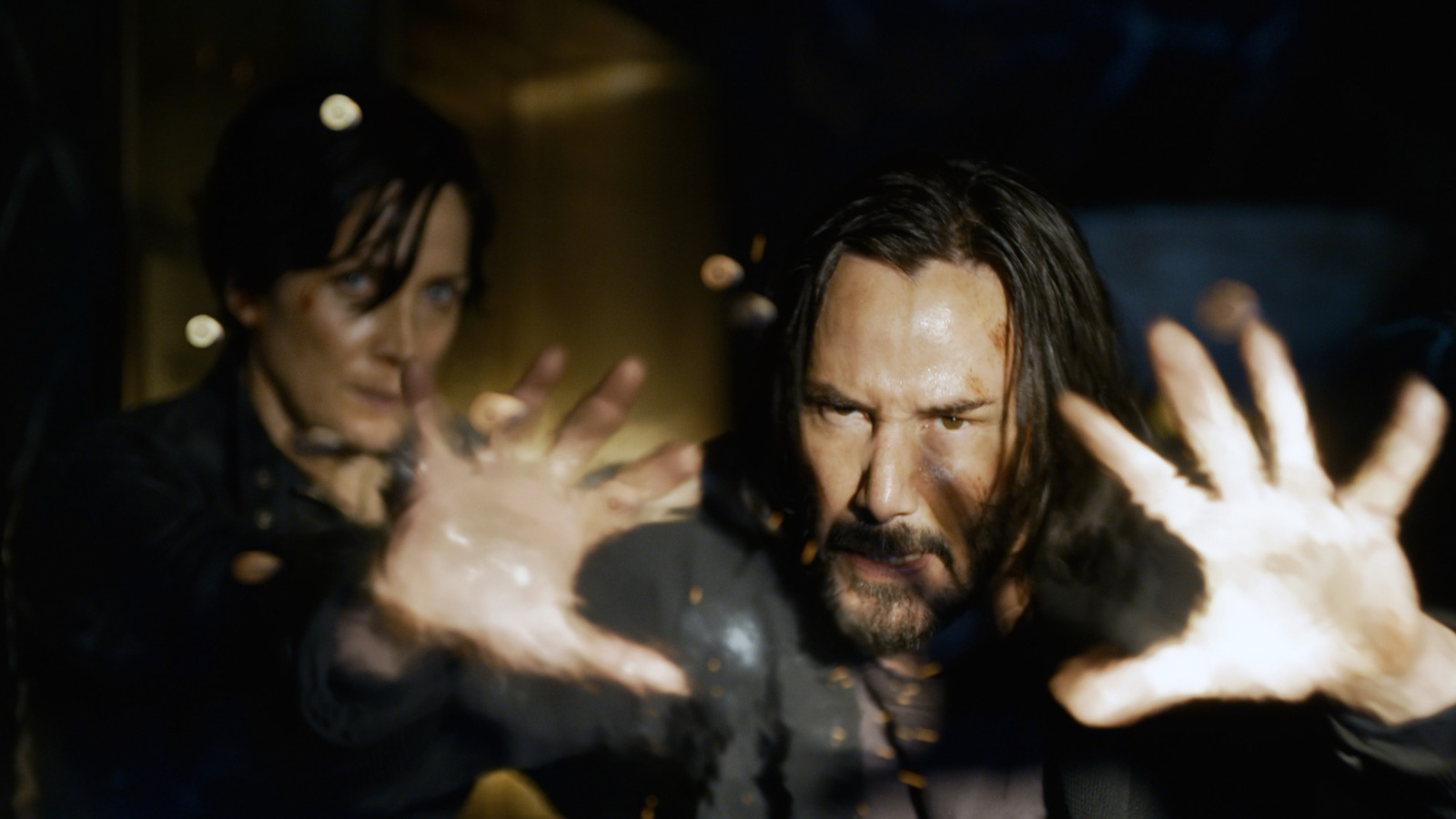 Kindly note: though efforts were made to skirt plot, certain of The Matrix Resurrections‘ first 25-or-so minutes are discussed herein.

The Matrix Resurrections is misshapen, haphazard, and some of the happiest a film has made me in 2021, regularly inspiring surprises and enthusiasms the contemporary tentpole long deemed irrelevant. Though less a take-it-or-leave-it gauntlet-toss than Lana Wachowski’s more boldly experimental endeavors, the virtues of her fourth Matrix are often in excess of anything she’s made since the polarizing-but-great sequels, sometimes in contradiction to the matter of us even watching it—a work about the fact that it nearly should not exist.

Great care’s of course been taken to retain narrative secrecy up to Resurrections’ release. Par for the course in a spoiler culture the original helped begat and its sequels tried subverting, and which this new beginning meets head-on in a sort of dare. Having heard stray, ultimately accurate details over the last six months hardly prepared me for witnessing firsthand this film’s tres meta instincts—neither wink nor nudge but a very, very hard poke in the chest. The plot hinges on not just an understanding of the original films but the environment into which its new progeny has been birthed: here’s a visionary filmmaker (she’ll tell you as much) detailing the struggles of Thomas Anderson, a visionary game designer whose legacy––the Matrix trilogy––is being exploited by its parent company (a directly named Warner Bros.) demanding a fourth installment lest other parties take the reins. Cue one obligatory Gen-X identity crisis. Cue a delightfully on-the-nose “White Rabbit.” And so reality unbends.

The script’s guffaw-inducing prompts find friction against Wachowski and her DPs’—John Toll participated in the first part of shooting until replaced by operator Daniele Massaccesi—great pains to ensure you Resurrections is not another Matrix sequel. The iconic green tint, filmic grain, and hard-lined compositions are truly things of the past, or another reality altogether. Clips from all three films—here treated as footage from Thomas Anderson’s video games—abound, each a callback and distance: return to the present tense and there’s no missing Wachowski’s wish to shirk a palette readily identifiable to anyone older than 25. Though retaining a 2.38 aspect ratio, Resurrections continues from the final seconds of Revolutions and casts its eye into the modern world: faster-cut, unmoored from dollies and tracks, and if its golden-hour beauty evokes something this series never strove for, question it—ask yourself why the omnipotent machine intelligence might try ensuring all’s lit in the key of an antidepressant ad.

The breakthrough, of course, is love. Wachowski’s stated reason for return was seeking comfort after the short succession of her parents’ death. Her film hinges on a similarly elemental tension in desire, and what it does most brilliantly is play the exact same notes between our nostalgia for these films, characters, and actors, gravitating towards each with equal speed and focus. And so the immediate attraction between Thomas Anderson and, time being, Tiffany is part and parcel of the chemistry between Keanu Reeves and Carrie-Anne Moss. For all the meta antics elsewhere it plays this completely straight: having seen them defy gravity, physics, seemingly time itself, Resurrections reverses course to seek dramatic import in their middle-aged selves bonding over espressos in a run-of-the-mill coffee place on a weekday afternoon. The frisson between actor and characters both, which I think the film wants us to take as a 1:1, is panoptic: it pushes on one player as another pulls back, it aches with regret over what’s almost known, it burns with passion either’s reluctant to recognize.

To emerge from the theater and almost instantaneously be greeted by a poster wherein Neo and Trinity get fully decked in classic Matrix garb rang like the punchline to a joke I didn’t know was being told—not unlike Kyle Maclachlan promising a Dale Cooper who’s “slightly different” in season 3 of Twin Peaks. And as in Lynch’s decades-later revival the force majeure becomes a human face: contra the much-memed ageless Keanu is an IMAX display of graying beard, thinner (but now freer-flowing) hair, wrinkles lining cheekbones. The mid-tier office worker Thomas Anderson is now a business-casual controlling interest; the sleek Trinity now styled to fit the role as mother of two and wife to a man named Chad. (Note the end credits if you want that joke to pay off with compounding interest.) The experience tailored around these tenets will no doubt prove tough to reconcile with certain audience expectations, but for me—a fan since childhood, an adult who could hardly believe the return—it’s unbearably moving, at times so purely romantic I could hardly stand the experience.

Resurrections deliberately bookends itself with these tensions, a first-and-third-act cause-and-effect one might fairly prefer over more identifiable franchise slabs. (A visit to IO, identical to Zion in all but name with its clear compositional and aesthetic echoes, momentarily grinds intrigue to a halt.) But Wachowski has always possessed the uncanny knack for turning bugs into features, means to an end, and I think her work inspires proprietary attachment so much for how it rewards faith in strange ideas, heavy-loaded symbolism, corny jokes, and bad taste. Her first solo feature doles all out in spades before finally revealing itself as a deeply expensive (and, for its investors, high-stakes) production predicated upon the sadness of growing old—how it robs us of identification, allows mistakes of yesteryear to fester, hardens the fear we can’t excel. Its argument for reality over fantasy is staked far less in heroics than love and comfort, a move that on paper could inspire an eye-roll but in its peaks—a Caravaggio-inspired tableau that finds the medium between reality-bending superpowers and the desire to hold hands—yielded swelling passion. Let’s not even try finding ostensible tiers of blockbuster filmmaking onto which that fits, lest I suggest anything newly made on this scale nearly suggested it was possible. The Matrix Resurrections is the exception, no rule.

The Matrix Resurrections opens in theaters and HBO Max on Wednesday, December 22.