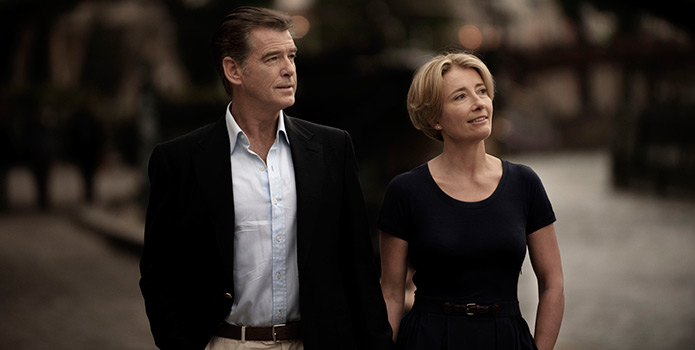 It didn’t drum up much buzz during its Toronto International Film Festival debut, but this year will see the release of the heist comedy The Love Punch, which brings together Pierce Brosnan and Emma Thompson. Coming from director Joel Hopkins, who last delivered the respectable Dustin Hoffman-led Last Chance Harvey, we’ve now got the first trailer. Featuring our leading duo as a divorced couple who scheme to snatch a $10 million diamond in France, it looks a bit too light and fluffy to conjure much anticipation. Check it out below (via HeyUGuys) for the film also starring Timothy Spall, Celia Imrie and Tuppence Middleton.

Academy Award-winner Emma Thompson plays Kate, whose biting banter with ex-husband Richard (Brosnan) suggests that the embers of their former ardour haven’t been fully extinguished. Unfortunately, the same can’t be said for their retirement nest egg, which is well and truly wiped out when Richard’s investment firm is defrauded and the employee pension fund is siphoned away. Learning that the unscrupulous French financier behind the scheme has just purchased a $10 million diamond for his bride-to-be, the divorced duo grudgingly agree to set aside their differences, and hatch a plot to crash the nuptials and nab the gargantuan rock. Complicating matters is the high-security wedding venue, a cliff-top castle on the Côte d’Azur — a challenge seemingly better suited to Brosnan’s erstwhile super-spy alter ego — plus Richard’s growing conviction that his split with Kate was a mistake.

The Love Punch hits U.K. theaters on April 18th with no U.S. release date yet.