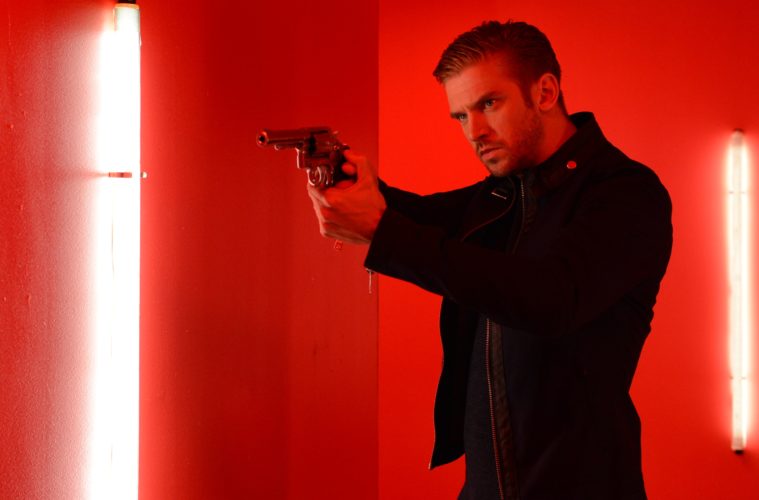 The Guest is sometimes goofy, sometimes dramatic, and an altogether fun time that has been described as Terminator meets Halloween. Indeed, those two film’s fingerprints can be felt all over this feature, which is currently in limited release with a wider expansion on October 3rd. But while the mash-up nature might suggest something faulty or less than endearing, frequent collaborators Simon Barrett (writer) and Adam Wingard (director) embrace the chaos and the tropes we all know and instead enjoy tweaking them in fun ways.

Rising from his role in period drama television is Dan Stevens, who has made a smooth transition from the pity party outsider to the dashing, handsome rogue that swoops in to the lives of a fallen comrade’s family and ingrains himself. He’s there to protect them, to make sure they’re happy. He made a promise, but he might not be able to keep it. It’s a fun thriller that shows Stevens range and features a host of solid performances and a stand-out one from fellow rising star Maika Monroe.

I recently had the chance to sit down with Stevens, Barrett, and Wingard to talk about Maika’s unique role in the film, how Stevens felt coming into an established collaborators haven, and I even got them to open up about what kinds of weaknesses they strive to improve on. It’s a fun conversation and I think Wingard in particular relishes the chance to talk about how, as they say, the sausage is made. Enjoy the full conversation below and keep an eye out for the film hitting theaters near you.

The Film Stage: So, this film is a lot of fun. But I got to say, Maika Monroe… she’s a professional kiteboarder. What the hell is that?

Simon Barrett: You know, the funny thing about that is that we have absolutely no idea. I kept trying to get Maika to explain it to me and so, like, “You’re riding a surfboard while you fly a kite?” And she was just like, “Yeah, yeah, something like that.” So, that’s my answer. [Laughs]. Well, I think she is a key part that probably isn’t going to get mentioned much because of you, Dan. You’re great, and this is your first big role since Downton Abbey. But she has this tough position where she has to be the straight character throughout. She’s charmed a little bit, but she remains hesitant.

Adam Wingard: Yeah, her initial instinct is to be suspicious of David before everyone else is.

So how did you go about casting her? Did you know from the outset that she was going to be integral?

Wingard: Very much so. The casting process for that character was actually the most intense because we went through so many auditions on that. She was actually the only audition that I felt like right away, got the sense of humor of the character. There was many ways I think you could play it, and she really understood that deadpan aesthetic. There’s a sarcastic charm to her and sarcasm is one of those things which can be very unlikable in a character. It can feel like a cheap acting fallback. Or, in her case, she can actually utilize that in a way where it’s almost endearing and that’s a tough thing to do. She just kind of did that naturally.

Barrett: A lot of actors have a tendency when they read slightly sarcastic dialogue, and this is also true for audiobooks, and I’m always frustrated when a reader does dramatic interpretations of sarcastic dialogue. It’s often what you get at an audition. They think you want to see their range. Maika was very clever actually and she just played it fairly deadpan, which is exactly what we were looking for. But that character that she plays is always, to me, the least interesting character in a horror film. Whether it’s the supposed final girl or just the straight, suspicious girl who is reacting to everything around her so it was not only a challenge to try to write someone who is smarter, and funnier, and therefore would be more interesting, but also to cast someone who had that innate likability.

For Dan, I know that Simon and Adam have worked together a lot. They’re frequent collaborators. And I’m sure they are using a lot of the same crew as well. It’s kind of a family. Did you do anything to try to ingrain yourself with them?

Dan Stevens: I think it was awesome. It was a very warm and welcoming environment. It’s a very well-established team. Keith [Calder] and Jess [Wu], the producers, are very much a part of that. And it’s about preserving that environment at the core of the set that enables good work to happen. I’ve seen it on a few sets and people maintain it in different ways. But this was a very special one because largely there’s a shared sense of humor on the set. We’re dealing with some fairly dark material at times here but we did try and have fun with this and inject some of the movie with that shared sense of humor that we all have. So I knew before stepping on the set that Adam and I got along and found the same things weirdly funny and then I met Simon and the rest of the team and it was an easy transition for me, I think.

[Watch a redux trailer for The Guest cut by Hobo With a Shotgun‘s Jason Eisener below.]

So, this is familiar territory a bit for Simon and Adam. But for Dan, this is really the first genre picture you’ve been a part of. It’s easy to feel comfortable but I’m curious what you are individually working to improve on.

Barrett: Well, it’s hard for me to answer that.

Stevens: Simon has no weaknesses.

Barrett: No, no. It’s not that. I think it’s very hard to be objective about your own weaknesses. I think the best thing you can do is to always make sure to not totally work in your comfort zone and just make sure that in my case, writing screenplays, is to make sure each one is better than the last. I could go through and list deficiencies I feel I found in my past works but I think it would mostly be very boring. I think the trick is to never repeat yourself. Make sure what you’re doing is a challenge, that way you can constantly grow as an artist.

Stevens: That was one thing I think for me, stepping away from a long-running TV show in England, a costume drama. I’ve done a few of those in England over the years and I was coming over here, looking to do something very different and happened to meet these two guys almost in a corridor. They come from more of a horror background and were looking to do something a little bit different and so despite our backgrounds and despite our different nationalities, we were in the same kind of mind space. Let’s do something a little bit crazier than we are used to and see what happens.

Wingard: For me, I feel like at the end of every production I check off things that I wish I’d done differently or just different aspects of my take on the stylization of the film that I found didn’t really fulfill my initial thoughts. I feel like we always are very critical of ourselves and that’s what helps us become better filmmakers because we do try to give ourselves that objectivity and not letting your ego just push you through everything. And really, a lot of our process is about objectivity. Simon, Keith, and Jess and I, the producers, we work really closely in the final stages of the editing in terms of just trying to make sure the movie is as tight as possible and that really does mean moving your preconceptions of your early phases of your vision of the movie and actually looking at what you’ve shot and what’s there. And what’s actually working and what’s not. That’s a very difficult thing for a lot of filmmakers because sometimes… well, I know this because of my early days, it really is hard to distance yourself from admitting is something is working or not. That means you have to admit certain faults in things but it’s part of the process and I think a lot of good filmmakers tell you the same thing: You have to trust other people’s opinions sometimes and take a leap forward. The Guest is now in limited release.