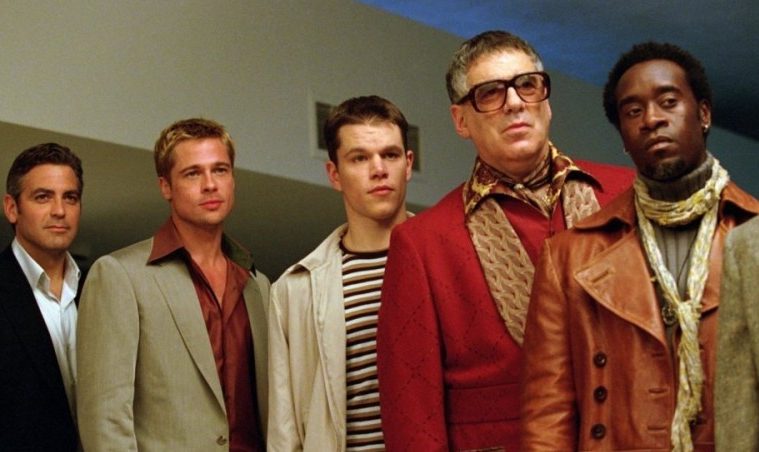 The Greatest Heist Comedies of All-Time

There’s nothing revelatory or new about adding a dose of the comedic to a crime picture, but the heist comedy is just a small corner of a vast and beloved cinematic landscape, as of recently, dominated by one filmmaker: Steven Soderbergh.

Responsible for four acclaimed entries in the genre, including Out of Sight and the Ocean’s 11 trilogy, Soderbergh has thankfully ended his so-called retirement and returned to film and the world of heist comedies with his newest, Logan Lucky, now playing in theaters. The film’s plot follows Jimmy Logan (Channing Tatum) a family man who plans to rob the Charlotte Motor Speedway in North Carolina, only to find he and his crew (Adam Driver, Daniel Craig and Riley Keough) must do the job while a NASCAR race is underway.

To celebrate Soderbergh’s return with Logan Lucky, we’ve decided to look back at the greatest heist comedies of all-time. Please enjoy and suggest your own favorites in the comments.

Often, the hardest part of a heist is not the execution of the robbery, but getting away with the money. In A Fish Called Wanda, a hilarious crime caper from the mind of Monty Python member John Cleese and Ealing Studio veteran Charles Crichton, the heist is a success, save for the arrest of one member of the crew, the only one who knows the location of the diamonds. While Wanda (Jamie Lee Curtis) tries to seduce their defense lawyer (Cleese) in the hopes of finding the loot, the animal-activist Ken (Michael Palin) attempts to kill the only eye witness to the heist. Soon, the crew’s plan spirals out of control, ensuing burglaries, divorces and even few dead fish before they ever get their hands on the diamonds. Finding humor in the twisted personalities and moral bankruptcy of its characters, A Fish Called Wanda delivers a biting, nasty comedy classic, a film well aware that it’s more fun to laugh at jerks, albeit lovable ones.

After the Fox (Vittorio De Sica)

Akin to cinematic candy, Vitorrio De Sica’s After the Fox is an aggressively ridiculous farce from screenwriter Neil Simon, which skewers the heist genre by way of the old film-within-a-film gag, turning the arrogance and vanity of its characters into dazzling comedy. Peter Sellars plays Aldo Vanucci, known as The Fox, a daring international thief capable of breaking out of any prison in the world. Planning to smuggle a shipment of stolen gold into Europe, Vanucci and his team disguise themselves as filmmakers, shooting a neo-realist film in a small coastal town. The heist plot is merely employed as clothesline upon which Simon, co-screenwriter Cesare Zavatinni and Sellars to hang their hilarious material. You can get a glimpse of the film’s tone in the world-weary exchange between aging movie star Tony Powell (Victor Mature) and his agent, played by Martin Balsam: “What’s neo-realism?” “No money,” the agent replies.

Wes Anderson’s feature debut, the slyly comedic Bottle Rocket, positions its heroes, three young wannabe criminals with an eye for small-scale robberies, as blind innocents, lost in the unfamiliar world of adulthood. As part of his 75-year plan, Dignan (Owen Wilson) forms a gang, consisting of himself, Anthony (Luke Wilson) who’s fresh out of a voluntary psychiatric hospital, and Bob (Robert Musgrave) who becomes the getaway driver simply because he has access to a car. Their dreams of criminality stem from a boyish sense of boredom and malaise, inspiring them to cross the line into what they think of as a life of crime. After their maiden heist at a local book store, the gang hits the road, hiding from the law that clearly isn’t chasing them: “On the run from Johnny Law,” Dignan says. “Ain’t no trip to Cleveland,” a touchingly quaint portrait of lost youth.

The Dion Brothers, or The Gravy Train (Jack Starrett)

A whimsically Southern take on the heist film, The Dion Brothers follows the two titular rednecks (Stacy Keach and Fredric Forrest) in their plans to rob an armored car. With the money, they hope to open the fanciest seafood restaurant in Washington D.C., where they’ll rub elbows with the politicians and socialites, or at least, that’s the dream. Their innate vulgarity and crassness dooms their aspirations, while their lack of self-awareness still pushes them to move forward with the robbery, an air of dread hanging over the entire operation. When the heist goes awry, the Dions are left running for their lives, pursued by police as they fight to get out with their money. Co-written by an uncredited Terrence Malick, the film has the distinction of being one of Quentin Tarantino and David Gordon Green’s favorite films.

Mrs. Wilberforce (Katie Johnson) lives alone, but takes in a lodger in the form of Professor Marcus (Alec Guinness) who plans to use the rented room as a practice space for his string quintet. The Professor’s ruse disguises the fact that they’re criminals, planning to rob an armored car, using the sweet old Mrs. Wilberforce’s bountiful kindness to their advantage. What’s remarkable about the Ealing Studios comedies (and most good comedies in general) is that the plotlines feel closer to dramas or thrillers with the comedic elements employed as acts of sabotage. The laugh-out-loud funniest moments in The Ladykillers stem not only from the clash of personalities crammed into a North London house, scenically located above the King’s Cross tunnel, but also from witnessing the antiheroes’ failure. The Ladykillers is like the comedic equivalent of a beautiful Swiss clock, its every move so precise and flawless that it’s a pleasure to watch as it ticks.

Another effortlessly charming Ealing Studios comedy, The Lavender Hill Mob is a film about the working class of London, slaving away under the hopes of a 15-shilling raise. Holland (Alec Guinness) works for the bank, overseeing the transfer of gold bullion, thought of by his employers as a pathetically honest and unimaginative sap. Living in the Lavender Hill Boarding House with other impoverished folks, Holland and Pendelbury (Stanley Holloway) devise a plan to make off with the gold by smuggling it to Paris in the form of Eiffel Tower paperweights. Director Charles Crichton allows the narrative to gracefully dance between dizzying pangs of hilarity and suspense, delivering an unabashedly lively and entertaining romp with a touching, heartfelt aftertaste.

Steven Soderbergh’s Ocean’s Eleven trilogy floats lighter than air through a series of juggernaut heists, repeatedly throwing hundreds of millions of dollars into the air, all the while its architects, led by Daniel Ocean (George Clooney) don designer duds, drop wry one-liners and “never break a sweat.” The fact that these photogenic cons succeed time and again is a testament to the creator’s skillful grasp of ‘70s neo-noir aesthetic, delivered in the form of a star-studded, sweet-as-bubble-gum crowd-pleaser. Steven Soderbergh’s breezy style, held aloft by David Holmes’s effervescent score, renders each con as gleefully enjoyable one-upmanship, each twist more deliriously bold than the last, stunningly paired with witty, quotable dialogue crackling with elegant splendor.

Out of Sight (Steven Soderbergh)

After busting out of prison, bank robber Jack Foley (George Clooney) and partner Buddy (Ving Rhames) plan to rip off a wealthy businessman (Albert Brooks) who they met in jail. However, Foley soon finds himself falling for U.S. Marshall Karen Sisco (Jennifer Lopez) who’s right on their heels. Steven Soderbergh’s wildly inventive adaptation of Elmore Leonard’s novel slow burns to its climatic heist, setting the table with vividly drawn characters with whom we enjoy spending time, before moving to its inevitable bittersweet, tragicomic ending. Decked with a sea of richly nuanced supporting performances from Don Cheadle, Steve Zahn, Dennis Farina and Nancy Allen, Out of Sight is a slick, brazenly engrossing semi-classic.

Dressed as a clown, Grimm (Bill Murray) pulls a gun and forces everyone into the bank vault, after a short diversion in which he must convince them that he’s not joking. “What kind of clown are you?” asks a shocked security guard (comedian Bob Elliot in a scene-stealing turn) “The crying on the inside kind, I guess,” Grimm replies. Quick Change opens with a misleadingly painless and laughably easy bank robbery in the middle of downtown Manhattan. It goes off without a hitch. But once Grimm and his accomplices (Geena Davis and Randy Quaid) get out with the loot and head for the airport, they find the hellish landscape of post-Reagan New York City stands in their way at every turn. Untouched by time, Quick Change is a bleak and cynical cult comedy, so much so that audiences at the time of its original release didn’t know what to make of it, resulting in the film barely managing to break even at the box office.

At the end of the Persian Gulf War, a group of soldiers (George Clooney, Mark Wahlberg, Ice Cube and Spike Jonze) find a secret map leading to hidden bunkers containing Kuwaiti gold bullion. Bored from the lack of “action” they experience in the desert, they set out to steal the gold. David O. Russell’s black comedy turned war caper quickly sets the tone as Wahlberg’s confused Troy Barlow shoots a surrendering Iraqi soldier in a misunderstanding, which horrifies him and excites the other Americans, hungry to see blood in the sand. Initially, the Americans ignore the horrors they witness, single-mindedly interested in the gold. But as the U.S. military spins its wheels, allowing Saddam Hussein’s troops to suppress and dismantle the Iraqi uprising, the would-be gold thieves can no longer turn a blind eye. At times, Russell aims for a Dr. Strangelove level satire, and inevitably falls short, but nonetheless, Three Kings accomplishes a great deal in its valiant, kinetic attempt.

One of the more offbeat entries in the Malpaso filmography, Thunderbolt and Lightfoot is so playfully aw-shucks in its tone and attitude that star Clint Eastwood all but surrendered the film to a young Jeff Bridges, whose performance becomes the narrative’s beating heart. A man in a black suit enters a church, interrupting a pastor’s sermon. The man pulls out a gun and starts blasting away at the pastor, who hightails it out the back door. Dodging bullets, the pastor (Eastwood) escapes to the highway, where he’s almost run over by Lightfoot (Bridges), a fresh-faced free spirit in a stolen muscle car. The two team up and plan a daring bank heist, but director Michael Cimino’s film is more concerned with the peculiarities of its characters than it is with the mechanics of the robbery. Moments such as when Bridges jokingly threatens to smear raccoon shit on Eastwood are delivered with a disarming innocence. Energetically careening back and forth between goofy warmth and brash genre thrills, Thunderbolt and Lightfoot is as lively and cool as its lead characters.

Logan Lucky is now in theaters.