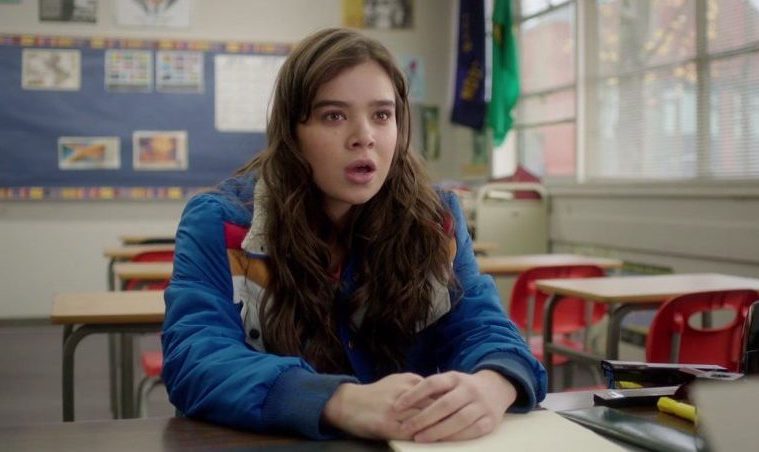 ‘The Edge of Seventeen’ Director Kelly Fremon Craig on Loneliness, Reception, and ‘Moonlight’

Depicting teenage angst with such pinpoint accuracy one wonders why it’s never been handled precisely this way before, The Edge of Seventeen was not only one of the best directorial debuts of last year, but one of my favorite films of 2016 — period. Writer-director Kelly Fremon Craig‘s script — which never dumb downs or generalizes the high school experience — is brought to life perfectly by Hailee Steinfeld in her finest, most emotionally honest performance yet.

With the film now arriving on Blu-ray/DVD today, I had the chance to speak with Craig to discuss capturing the high school experience, the underlying sadness of the film, two of my favorite scenes in the third act, the box-office reception, her favorite film of last year, and much more. Check out the full conversation below.

The Film Stage; So many high school films feel like they are written by adults trying to remember the experience, but not quite grasping it. This one has an authentic feel throughout the whole thing. Obviously, you didn’t start writing this when you were in high school, but how did you get back to that mindset?

Kelly Fremon Craig: You know, I did a lot of research and I hung out with a lot of teenagers to just remember. I also went to high school to be a fly on the wall. I went to a high school dance — just really try and get back and remember what it was all like. It was interesting how much of the feeling of that age just came instantly flooding back. As a 30-something woman I was immediately back in all my insecurities and every awkward feeling, you are back there. It’s just some visceral reaction where you right back. So I think that helped a lot. Spending a lot of time sitting down and talking to teenagers and asking them a lot of questions, trying to get the age right.

There’s a pathos to this movie, an underlying sadness that runs throughout, which is what I love about because other studios might have given notes (“this has to feel happy, everyone has to feel good”). Hailee Steinfeld is quite amazing in being able to convey this without feeling cloying. Can you talk about that element of the film?

Yeah, it’s interesting. Just this past weekend I went and I drove around my old college, which I hadn’t been to since I was in college. It was so weird being back there because it was there was this sense of gnawing loneliness that I remember having there and that I remember having in high school. I think it’s just a part of that age, at least it was for me. This feeling of being all alone in the world. Does anybody understand? At some point feeling like nobody, nobody could possible get what you are feeling. I guess that was so central to my experience through high school and college that I didn’t know how to write a movie without that. It was just so in the bones of it.

The one scene that really hit me hard was when Blake Jenner’s character comes to Woody Harrelson’s character’s house and has that speech about his life is “fucking incredible” and then it shifts and we really get to see his perspective. It felt so true to a brother-sister relationship where you are at each other’s claws all the time, but then you put yourself in their shoes.

Yeah, the central thing I was really trying to explore is how you can feel like you are the only person in the world with problems — that everybody else is faring better than you. Nadine definitely suffers from that. I think in her head her brother is the greatest manifestation of that story she tells herself. Somehow life has just shit on me left and right, but has left him completely unscathed, and it’s so fucking unfair. In times when I’ve felt really fucked up or emotional or I’m going through a really hard time, what’s worse than that is the feeling that while you are feeling that bad, everyone else is happy. It’s just terrible. It’s a terrible thing. It’s bad enough to be in pain. It’s way worse to feel like you are all alone in your pain. The message of the film is really that nobody gets out of this unscathed. Nobody gets out of life without some real bumps and bruises, even if they look like they are faring a lot better. I think the truth is that just some of us hide it better. Some of us just pretend better, but the truth is that everybody goes through stuff that is really difficult. It’s carrying around something that’s tough. I think at that age it’s really easy to feel like you are the only one, so that’s what that speech was about.

The other scene that I loved was Kyra Sedgwick’s character and her text message conversation with her daughter, when she lets go and says “Ok.” It’s amazing how little can say so much.

Now I’m a parent and I have a three-year-old son and as I was writing this, I was pregnant with him, then giving birth, then starting to raise him and be a mom. I just had a lot of compassion for how much you worry about your kid and how you are trying to do the right thing for your kid, but your own flawed self gets in the way. I still struggle with that. I’m constantly nervous about the way I’m screwing up my kid. [Laughs] I guarantee somehow I’m messing this up, because everybody has something they could talk about in therapy about their parents. That scene was just her realizing that maybe the best thing to do was to let go a little, to not fight, to not try and control it. I think as a parent that’s what you are doing every day. Every day you are letting go a little more. That’s the job, one you let go — I don’t know if you let go completely — but the job is for them to be on their own two feet. So it was just about that. It was also about her letting go of her own personal issues. Because you can get caught up in your own personal issues and be like, “I deserve a call back right now! This is unacceptable.” You can get into all your own stuff, but it was her sort of letting go of that.

When the film came out, we were championing it a lot on our site and everyone I talked to really loved it, but it wasn’t a smash hit. I was wondering what you thought of the reception of it, both as it seems to be gaining a cult following and the box-office?

One of the best parts of the whole experience is seeing people watch it and relate, and say “Oh my God, I’m her. She’s me. I felt that. I’ve been there.” There’s a great quote that Jim Brooks, our producer says, and I love it so much. “The purpose of film is to remind you that you are not alone.” That’s the real purpose of it. Every time that happens, I just feel like, “Oh, man. It’s the best feeling.” So that part is really neat. It’s overwhelming. It’s surreal. The box-office thing, that’s always kind of a crapshoot. Obviously, you always hope that as many people are going to see it that can possibly see it, but it’s nice that the people that are seeing it are responding to it.

Maybe it’s just because of my age, but it feels like struck a chord a lot with people that have been 5-10 years removed from high school. Do you find that at all, when you have a perspective on the experience that you get more out of the movie?

I wonder. It’s interesting. People that are in the white-hot center of it, like 17-year-old girls seeing it, I hear a lot from them — girls and guys. I heard a lot from them that they see themselves reflected in it and that’s really cool, but it’s also been nice that people of a few years removed seem to be able to reach back to that feeling. Maybe it’s because I don’t know if that feeling ever completely leaves. The things that she’s dealing with in this film, embarrassingly, I don’t deal with on that level, on that extreme, but they still creep up. I still feel them here and there. Now I have the benefit of knowing that there’s an ebb and a flow to life and that feeling will pass. It’s not the end of the world, which I think you don’t know at that age, which is why it’s so devastating. After anything happens you feel that it’s going to be permanent and forever, but now you sort of know there’s highs and lows. Again, I don’t know if that feeling is every gone, so that may be the reason that people are able to relate even years beyond.

I saw on Twitter you said Moonlight is your favorite movie of the year. I actually saw these movies close together and while the protagonists couldn’t be further apart, a similar feeling of loneliness pervades both movies.

I think that movie is a masterpiece. I had the chance to talk to Barry Jenkins. As we go to these little awards season events and you see the same sort of people there, and for like three or four of them, when I would see him across the room, I’d go, “I’d gotta talk to him.” For one reason or another, I couldn’t figure it out or too much stuff was going on. Finally, at a BAFTA event, I made a point to go over and just gush to him about what his movie meant to me. I think part of why it’s such a triumph is the character is so non-verbal. He says so little and yet you feel so much. I think that’s such a triumph. It’s also a triumph in subtlety in that in never pushes too far. It never pushes into melodrama even though it could. It explores the shades of grey in life in a way that’s so specific and so heartfelt and sad and, in a weird way, life-affirming. Finding those little, tiny beautiful moments in the midst of a lot of pain. It stayed with me. It still stays with me, but for days and days I was just in it after watching it.

The Edge of Seventeen is now available on Blu-ray/DVD.