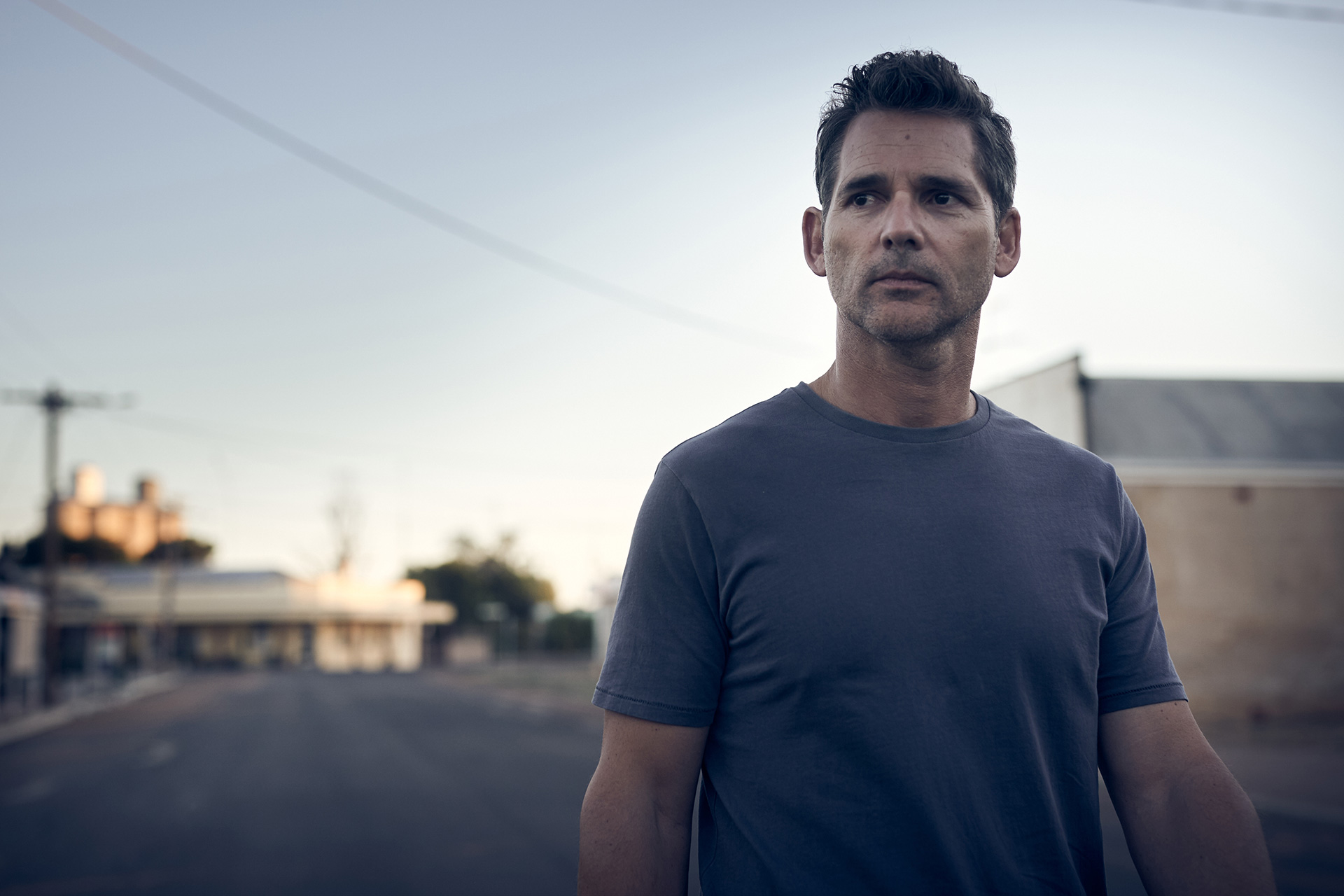 Aaron Falk (Eric Bana) wasn’t ever planning on coming back. Leaving wasn’t his choice, but at a certain point the present replaces the past. Hearing that his best friend from high school killed his wife and son before turning the gun on himself wasn’t therefore going to change his mind. If anything, knowing that truth and the fact that Luke was gone might have been the final nail as far as never returning at all. But that’s when the card came with a cryptic message more or less blackmailing Aaron into attending the funeral. It was sent by Luke’s father and stated that he knew they lied twenty years ago. What was the lie? We don’t yet know. Whatever it was, though, it worked. Aaron was heading home.

Writer/director Robert Connolly’s The Dry (co-scripted by Harry Cripps from Jane Harper’s novel of the same name) is thus two mysteries in one: past and present. Rather than be for the small-town community where Aaron was born, however, these mysteries are for our benefit as viewers since they made up their minds long ago. Luke’s parents are the only ones holding out hope that their son was somehow framed with the notion Aaron, a federal agent of some renown in the city, can prove it. Well, Luke’s mother thinks that at least. His father is more interested in wrapping his head around what his son being a murderer means in context with what happened back then. Because if he could kill now, who’s to say he didn’t before?

Ask anyone else in town and they’d say Luke was innocent of young Ellie’s (BeBe Bettencourt) death because the real perpetrator was Aaron himself. It’s why he had to move in the first place: the town had turned on him even though he claimed he didn’t touch her and had Luke as an alibi. Ask Grant Dow (Matt Nable) and he’ll tell you that one murderer has returned to exonerate another after the latter exonerated the former back then. Luke’s word forced the police to stop pursuing Aaron and now Aaron’s clout in law enforcement was here to return the favor by clearing Luke’s name despite the case being closed. Or is it? The local cop assigned the homicide (Keir O’Donnell’s Greg Raco) has his own suspicions too.

What can we believe? Aaron obviously lied two decades prior, but was it to cover for himself or Luke? Or was the lie a precaution hatched by two teenagers afraid that circumstantial evidence could destroy them? Only Aaron knows the answer and the longer he stays in town to investigate Luke’s murder/suicide, the more frequent his memory shares slowly evolving glimpses for our own edification. Even so, there’s no getting around the fact that we can’t trust him or anyone else. Jamie (James Frecheville) is lying. Gretchen (Genevieve O’Reilly) may have motive. And Ellie’s aging and senile father (William Zappa’s Mal) has a temper worth noting. Add Grant’s grudge and the school principal (John Polson’s Scott Whitlam) becomes the sole figure not embroiled in this mess.

The Dry reveals itself as an engaging thriller in the vein of fellow Australian production Top of the Lake with duplicitous figures sharing a contentious enough history to confuse facts with emotions thanks to having a familiar face heading up the investigation. Allegiances and animosity worm their way into the process to cloud judgment and make things personal regardless of whether someone like Greg objectively taking pause proves otherwise. With every personality clash comes another as speculation leads to assumption and violence or accusations become the defense mechanism of choice. And Aaron isn’t exempt. His anger, regret, and confusion lead him down those roads with everyone else—so much so that his connection to the town may earn his being thrown out before his talents break things open.

With a great central performance (How long since Bana had a role like this? Maybe Munich in 2005?) and an intriguing setting (Aaron’s hometown has been mired in a year-long drought that’s put everyone on edge with money worries and the like), it’s difficult not to get wrapped up in these dual cases to find the truth. Maybe it’s that no one knew Luke as well as they thought. Maybe it’s that Aaron’s guilt has him motivated to repent. Or maybe it’s something else completely on both ends: Harper’s story does well to ensure we’re constantly in motion from one possibility to the next until the answer finally arrives. And as one piece falls into place, many more follow to prove how truth is oftentimes worse than fiction.

It’s a dark tale like Top of the Lake in that way too. That they (and other Aussie productions like Mystery Road and Goldstone) can keep their mysteries close to the vest while we dig deeper into the characterizations and authenticity of place only augments their success. Our discovering just how meticulously drawn The Dry‘s narrative is after we’ve already found ourselves immersed in its world almost proves the cherry on top rather than the reason why we sat down in the first place. That’s when you know you have a winner: the strings fade away in order for us to exist fully in the moment. Our minds don’t therefore wander to hypothesize what’s coming next because present drama is enthralling enough to monopolize our attention.

The Dry opens in limited theaters and VOD on May 21.