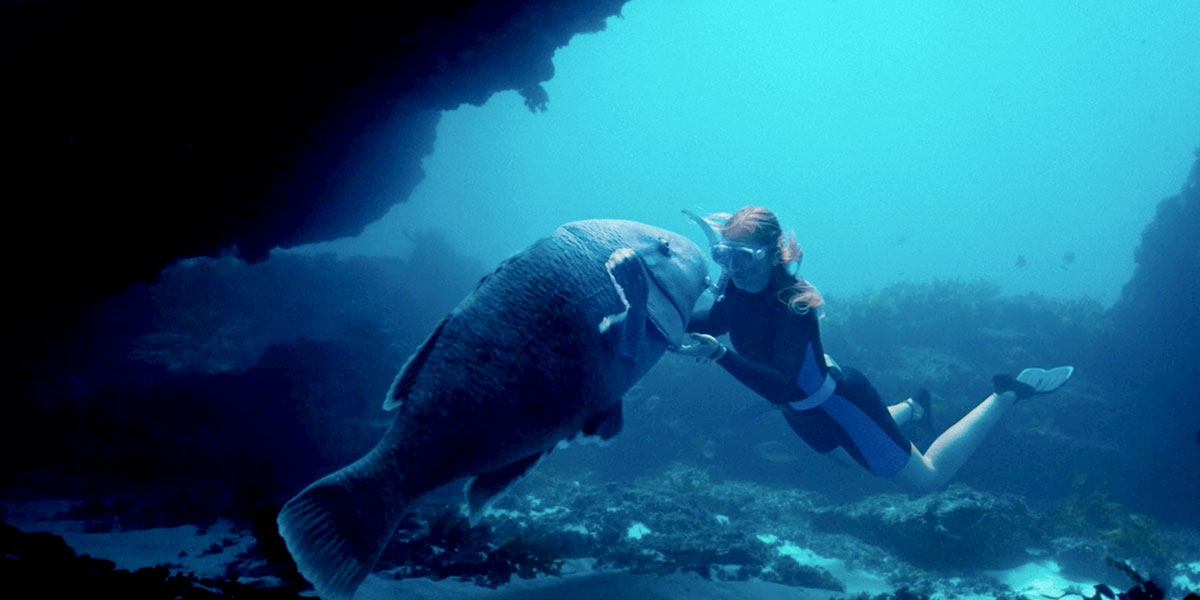 Australia’s answer to the 2022 Oscar Best Picture winner CODA is here. I’m only half-joking. Blueback is a bit better than the movie that most recently won Best Picture at the Academy Awards, but it employs a similar sort of lightweight treatment of banner issues. Blueback has two major characteristics in its favor: the aquatic cinematography by Andrew Commis and Rick Rifici and that it’s satisfied with being a message movie for kids. It would be perfect to show in a middle school or elementary school classroom during substitute teacher day, like Free Willy, a choice selection when I was a kid. It’s completely inoffensive but also lacking emotional heft, a result of sloppy story structure and flashback-heavy plotting that may have worked well in the source novel by Tim Winton (who also wrote the screenplay), but drains the tension in this adaptation.

Abby (adult: Mia Wasikowska, teen: Ilsa Fogg, child: Ariel Donoghue) and Dora (Radha Mitchell) are a daughter and mother who share a strong bond in diving in their reef off the coast of a rural Australian outpost. Dora tells her daughter “we were born in water.” Underwater, they see a large groper fish who is friendly. They play around with him and Abby names him Blueback. The film relies on flashbacks as a crutch to conceal and reveal information, but does so clumsily and often times in a way that betrays any potential emotional build-up or character development, especially in Abby and Dora’s relationship. A notably egregious example is when Abby in present-day tells her now sick mother that she’s sorry for being a coward at the protest against the destruction of the shoreline. The film then cuts back to that same sequence. When Dora confronts Abby about her shyness during the protest, the ensuing fight has already been rendered moot by the future apology.

All of the big names in the film––Radha Mitchell, Mia Wasikowska, and a “special appearance” by Eric Bana as a wise-cracking fisherman named Mad Macka––give serviceable performances that don’t really leave a lasting impression. Director Robert Connolly instead keeps the focus and our attention on the wildlife and the sea, which are always in sight and mind in the film. Abby’s budding friendship and almost-relationship with a young man named Briggs (Clarence Ryan) comes from their mutual love of the sea and they spend all their time on or near the beach. The people in Blueback have their friendships, relationships, and communities completely defined through the water. It’s a tight-knit community where everyone knows everyone, a human ecosystem in a symbiotic relationship with its bordering aquatic ecosystem.

It’s the importance of these communities and how closely they are intertwined to the nature that surrounds them, that serves as the core of Winton’s story, highlighting ecological degradation to industry and climate change.  One of the most compelling scenes in the movie is when a teenage Abby (Ilsa Fogg, who gives the film’s best performance) and Dora’s plea to the county board on policy decisions. Abby shows her watercolor paintings of marine wildlife which feature all of the biodiverse organisms she discovered diving since she was a little girl. A politician responds to her asking if they should seriously consider changing policy “based on the drawings of a child.” The patronizing that politicians do to kids and teenagers who often do have a much more optimistic and morally sound understanding of the value of nature and existence in this world beyond human existence is tragic. It calls to the dangerous anthropocentric views of the societies we’ve built that the inherent beauty and necessity of preserving animals and plants around us is a ‘childish’ notion. For such a salient and impactful scene in a film, it really makes me wish that the rest of Blueback lived up to it.