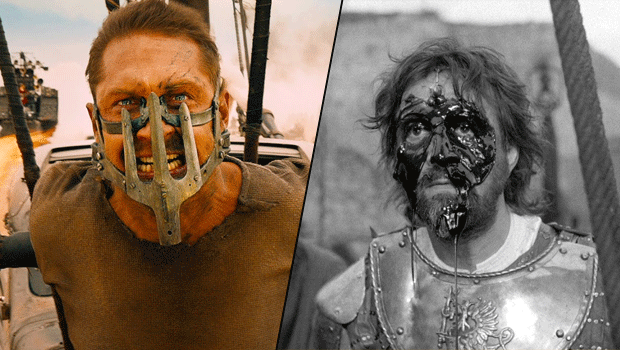 The Best Double Features of 2015

As a cinephile, few things are more sublime than finding back-to-back features that hit some specific thematic sweet spot. Drive-in theaters may not be the popular viewing spot they once were, but with the overwhelming accessibility we now have, one can program their own personal double bill. Today we’ve run through the gamut of 2015 films to select the ten finest pairings.

As a note, there are a few recommended double features from the same director (Spike Lee‘s Da Sweet Blood of Jesus and Chi-Raq, Noah Baumbach‘s Mistress America and While We We’re Young, and Xavier Dolan‘s Mommy and Tom at the Farm), but we’ve elected to stick to a more thematic playing field. Check out list the below, and we’d love to hear your own picks, which can be left in the comments.

The Big Short and 99 Homes

Telling American’s modern horror story from two distinctly different, albeit wholly complementary angles — both thematically and aesthetically – The Big Short and 99 Homes each present an upsetting and surprisingly entertaining look at the recent financial crisis. While Adam McKay’s feature uses a comedic thrust to engage, Ramin Bahrani wrangles the attributes of a thriller to captivate. As the former looks at the macro machinations of the widespread incompetence that led to economic downfall, the latter is a riveting, ultimately devastating micro examination of the effect it had on millions of families. Each also depict those who were able to come out on top through perhaps questionable means. Making for an absorbing, but ultimately – and intentionally – frustrating double feature, it displays how we’re bound to repeat history. – Jordan R.

Denis Villenueve’s Sicario and Matthew Heineman’s Cartel Land are both about the U.S.-Mexico border and filled with bracing, white-knuckled imagery, but they’re companions on a philosophical level as well, heightening their respective battles into a microcosm of good vs. evil and bureaucracy vs. autonomy. The characters in either are permanently pushed into a corner, whether it’s Dr. Mireles’ inability to weigh the need for due process vs. justice or Emily Blunt’s gradual submission to forces that are outside both her reach and control. As a double feature, this is a dip into the moral unknown, into a place where the rules are drawn up based on who’s in power rather than any objective sense of moral culpability. But they’re also arguable views of both sides. Where Sicario dives headlong into the United States’ experience with cartels, Cartel Land is a peek into Mexico’s methods of fighting back against the corruption within its own country. But even with the most idealistic intentions on both sides, sometimes the best that can be hoped for is a lesser evil. – Michael S.

Room and The Wolfpack

The freedom of enjoying the world’s pleasures are unceremoniously refused in these two features, one a narrative drama loosely based on a true story, the other a fascinating documentary. Room, powered by affecting central performances from Brie Larson and newcomer Jacob Tremblay, presents a harrowing scenario of unequivocal evil as a mother and her child are trapped in a single location against their wishes. The reason for simulated imprisonment is less malicious in The Wolfpack, where parents impose a strict captivity on their children. As with Room, these restrictions lead to boundless imagination and eventual catharsis – a testament of perseverance in the even the most traumatic of situations. And after you’ve watched these two, if you’re in the mood for a triple feature, seek out France’s Oscar entry Mustang for a similarly themed drama. – Jordan R.

Shaun the Sheep and The Tribe

Often, a good double feature involves two films that complement one another, while there are other instances where a proper bill will showcase two films that attack similar themes. In the case of this team-up, the unifying aspect is their lack of dialogue, and the joy of the double feature comes not from seeing them as similar or complementary, but as examples of how far to the extremes two different films can go even when given the same restriction. It is a startling reminder of the tonal and thematic spectrum that cinema is able to create, even devoid of obvious markers of language and produced purely through the medium’s magic. – Brian R.

Mad Max: Fury Road and Hard to Be a God

“Everybody’s gone out of their mind.” Looking for a double feature that may urgently require you to get a tetanus shot afterward? You’re in luck. As a pair, George Miller‘s Mad Max: Fury Road and Aleksei German‘s Hard to Be a God are equally twisted and insane descents into unfathomable hell, toting visuals that make Fellini Satyricon look like children’s programming. On camera, it would indeed appear that everyone has lost their grip on reality. Yet behind the scenes, the two films couldn’t be more different: God is a dense, three-hour, black-and-white, Russian experimental epic, while Fury Road is a big-budget sequel, the epitome of Hollywood blockbuster entertainment. One sounds like a cerebral slog and the other like yet another cynical product. Thankfully, they grab you by the throat from their opening scenes, trapping you in these unique and horrific worlds. Both convey a fiendish nightmare vision of society, wallowing in visual excess and hygienic squalor. In doing so, Miller and German deliver arguably the finest works of their illustrious careers. – Tony H.

Heaven Knows What and Time Out of Mind

When heard of from a distance, they would appear to stand on opposite sides of the same topic. One jettisons celebrity presences and embraces a down-in-the-pit grittiness that, in many scenes, would let one mistake it for a documentary; the other is a star-led, (slightly) glossier look that more often has a traditional means of visual construction. Yet Josh and Benny Safdie‘s Heaven Knows What and Oren Moverman‘s Time Out of Mind — the former led by the recently destitute Arielle Holmes and the latter commanded by a dirtied-up Richard Gere — do justice to the issue of homelessness in harmonious measures, neither shying from its horrors nor veering towards exploitation to makes their points clearer. And both capture New York from a distance that makes its environmental components all the more intimate, the use of long lenses allowing performers to stand back and interact with their spaces in seemingly uninhibited ways and creating a sense of, among all things, freedom. If it’s taken as a knock when I say you, for the sake of your well-being, should be sure to watch Time after Heaven, don’t think one will give you a much easier experience. Both know that this pill should be hard to swallow. – Nick N.

One starts as a hilarious series of vignettes before turning into a treatise on the worst of humanity; the other introduces itself as an austere-beyond-austere costume drama to mask an undercurrent of oddities and, as employed when necessary, dark humor. There’s great entertainment in how Roy Andersson and Jessica Hausner build their respective worlds, levels of detail offering opportunities to stop, observe, and apply guesses as to what’s happening outside the tightly locked frames. Both can be streamed right into your home, and have been made with a care that, even on a TV, is as transporting as any IMAX 3D experience. – Nick N.

The double feature pairing of Spike Lee’s Chi-Raq and Sion Sono’s Tokyo Tribe may initially seem forced, being that both fit only the loosest definitions of a hip-hop musical. The former is a satiric, rhyme-happy sex-comedy-cum-social-commentary based on Lysistrata and set in an exaggerated (but not too exaggerated) version of Chicago; the latter is a parade of Hype Williams-era rap-video imagery cross-pollinated with Sono’s own hyper-violent, splatter happy genre-director leanings. But while the two use trappings of hip-hop and its attendant stereotypes to vastly different ends, they’re bound at a more fundamental level as twin studies of posturing. Chi-Raq boils down relentless street violence to a boys-will-be-boys mentality — a view of the violence as grown-up kids having pissing contests who are unable to look past the urges between their own two legs. Tokyo Tribe doesn’t confine its violence to only men having male problems, but it views violence and sex with a similar claustrophobia even as it fetishizes each digitized gunshot and exposed breast. Either film’s worldviews are built on histories of petty, pointless rivalries that stretch back so far that even the leaders have no idea what they were about in the first place.  – Michael S.

The medium of cinema is ever shifting before our very eyes, with directors finding new ways to convey stories. It was rarely more evident this year when it came to a pair of relatively small-scale, yet temporally expansive features. Instead of the next binge-watch of the latest television release, we’d recommend carving out around 10 hours to watch Bruno Dumont‘s slyly comic mystery Li’l Quinquin and Miguel Gomes‘ sprawling, genre-bending, untidy and ultimately landmark three-part Arabian Nights. As other directors tout their boundary-pushing technological advances in the field of cinema, here are two features that show distinctly different ways of expanding our thoughts on storytelling.  – Jordan R.

The Hateful Eight and Bone Tomahawk

There’s no two ways around it: Kurt Russell is as an indisputable force of rugged charisma. While his gifts might have been a bit wasted earlier this year in Furious 7, this fall brought a pair of prime examples of his talents in the form of two very different westerns which, seen together, make an excellent double feature: Bone Tomahawk and The Hateful Eight. Quentin Tarantino’s latest is very much his own version of the genre, an escalating time bomb of wordplay and violence, while S. Craig Zahler’s work might satisfy those looking for more of an old-fashioned title – with a few gruesome twists, of course. Sporting similar and impeccable facial hair in both, Russell commands every scene he’s in, even when surrounded by some of this year’s finest ensembles. – Jordan R.

What are your picks for the best double features of the year?