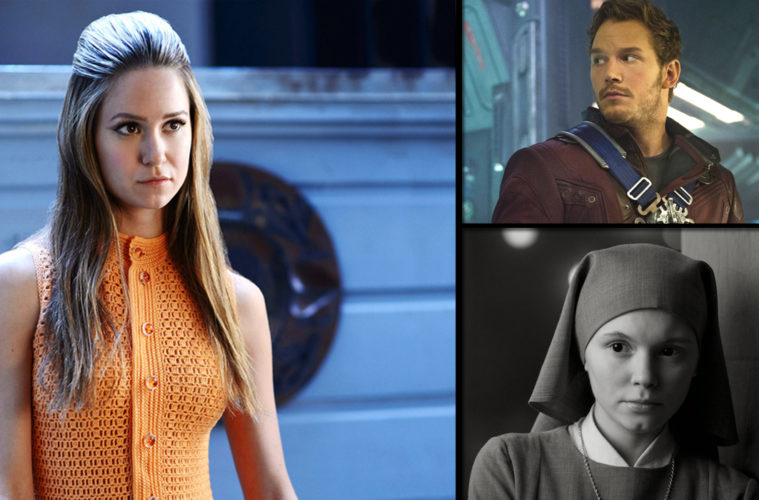 The Best Breakthrough Performances of 2014 After discussing the year’s breakthrough directors, it’s time to traverse to the other side of the camera. Whether it’s their very first performances or a talent who’ve been seen in a variety of features yet, for whatever reason, hadn’t been allowed to command the screen, this year’s breakthrough actors are an eclectic group. Ranging from some of the highest-grossing features of the year to minuscule independent dramas to projects that have yet to be officially released, check out our rundown of nearly 20 breakthrough actors that left the biggest impression on us in 2014.

Mira Barkhammar, Mira Grosin, Liv LeMoyne (We Are the Best!)

We’ll bend the rules a bit for our first selection by honoring the most spirited and charming trio of actresses to grace the screen this year. Newcomers Mira Barkhammar, Mira Grosin, and Liv LeMoyne bring a remarkable amount of energy and honesty to Lukas Moodysson‘s Swedish-Danish drama about the formation of a punk-rock band in early 1980’s Stockholm. While a certain feature mentioned below might capture more of the coming-of-age experience, We Are the Best! provides perhaps the most life-affirming snapshot of this year. – Jordan R.

There’s a specific kind of cinematic fantasy that lends powerful emotion catharsis to action films: the average man taking competent, violent justice into his own hands. If Liam Neeson is the current reigning king of this fantasy, then Macon Blair in Blue Ruin can be considered the real-world equivalent. Blair, in a wonderfully calibrated performance, showcases grim determination tempered with understandable incompetence. It is easy in a film like this to be either viciously efficient or bumblingly incompetent, but Blair pulls a greater trick — steely determination mixed with real human weakness. – Brian R. It isn’t really much of a performance at first — the first stretch of screentime is mostly devoted to observation or providing pathways for others (a mother, a father, and, yes, an alcoholic stepdad) — and that’s what makes the final result all the more surprising. As Boyhood extends into its third hour, a large part of why Ellar Coltrane’s presence becomes so strongly pronounced is because the curiosity about how he’s developed as an actor — as well as how Mason Jr. has progressed as a person — is never not present and never not paid-off. It’s so obviously one of the most unique situations any actor has ever been put in that you might forget how much his input helped justify the significant reach of Linklater’s experiment. – Nick N.

Elyes Gabel (A Most Violent Year)

While Oscar Isaac and Jessica Chastain may feel like they are participating in The Godfather cosplay, A Most Violent Year‘s most believable supporting character is easily Elyes Gabel‘s Julian. The actor, briefly seen in World War Z and Interstellar, is given more to do here (even if his storyline is a bit short-shrifted) as he must deal with the direct impact of the criminal underbelly in the heating oil business. After being given some of the film’s most crucial, gripping scenes, we hope it won’t be long until Gabel takes the lead. – Jordan R. Wetlands is one of the grossest gross-out comedies I’ve ever seen. Sure, I’ve been grossed out in a theater before, but here’s a flick that would make John Waters proud as he’s sick to his stomach (and that’s just after the opening-title sequence). Carla Juri stars as Helen, and she’s up for the challenge as an 18-year-old girl with an unfortunate case of hemorrhoids and a taste for sexual experimentation that thankfully did not inspire a pizza special at your neighborhood dine-in theatre. Juli is up for the challenge of whatever director David Wnendt throws at her, playing along and fearlessly crafting a complex performance. For playing it straight, the film emerges as an engaging, sympathetic, and very intimate portrait of a young women with a punk attitude and poor hygiene. – John F.

Jack O’Connell (Starred Up, Unbroken and ‘71) While he was seen in acclaimed U.K. films like This Is England and Harry Brown, 2014 marks the break-out year for rising star Jack O’Connell. We have yet to see if audiences connect with his forthcoming Unbroken or next year’s ’71 (which we recommend), but by far his best performance yet comes with David Mackenzie‘s prison drama Starred Up. Overlooked when it was released earlier this year, it displayed an actor who seemingly has no qualms when embodying his violent character. Perhaps the biggest challenge O’Connell conquered was also evoking an unexpected sense of sympathy in this tortured soul. From a forthcoming riff on James Bond to Terry Gilliam‘s next feature, it’s seemingly only the beginning of a long career for the actor. – Jordan R. Because Nymphomaniac is a film so dependent upon small progressions and their cumulative effects, it would be impossible for the four-hour-plus film — one in the five-hour territory, if you’re viewing Lars von Trier’s full cut — to glide so smoothly without a performance that can maintain its initial balances between absurdity and tragedy. Fully convincing in the role of Young Joe is Stacy Martin, whose emotional and physical fearlessness is bested only by an ability to leave imprints as this story shifts toward the ever-present Charlotte Gainsbourg. Now that we’ve seen her wear so many hats in a first feature, the future seems very bright indeed. I can’t wait to follow that path. – Nick N.

Gugu Mbatha-Raw (Belle and Beyond the Lights) English actress Gugu Mbatha-Raw truly surprised us with three engaging performances in two excellent pictures. In Amma Asante’s handsomely lensed Belle, Mbatha-Raw is restrained and thoughtful as a bi-racial women stuck between two worlds: love and destiny. Meanwhile, Gina Price-Bythewood’s Beyond the Lights — a complex exploration of race, sexuality, and identity, cloaked in a love story — allows Mbatha-Raw to simultaneously ooze raw, performed sexuality and vulnerability on- and off-stage as Noni, a pop star who’s been stripped of her voice by external forces. Embodying the performed identity, Mbatha-Raw is a powerhouse, bringing to her on-stage performance the kind of convincing energy evocative of Prince’s iconic numbers in Purple Rain. Off-stage, she’s brilliant as a romantic interest struggling to find her voice as her talent’s been hijacked by an industry and machine she cannot control. – John F. Technically not entering limited release until next month, Xavier Dolan‘s Mommy had an awards-qualifying run earlier this fall, which gives us the opportunity to recognize Antoine-Olivier Pilon‘s stand-out turn. Working with the director on both Laurence Anyways (briefly) and his controversial music video for Indochine‘s “College Boy,” Pilon brings unbridled chaos and empathy to a deeply troubled teen. With one never quite sure how he will react or lash out in any given situation, it’s a perfect marriage with Dolan’s energetic approach to the material. – Jordan R.

Chris Pratt (Guardians of the Galaxy, The LEGO Movie) Those familiar with Chris Pratt‘s work in Parks & Recreation were unlikely to be surprised by his comedic timing and charms in Guardians of the Galaxy. What was truly unknown to most people were his abilities to believably pull off dynamic bits of action and anchor the dramatic stakes of a film, something he ever so briefly displayed in Zero Dark Thirty and Moneyball. All of this, and even a key shirtless scene, allowed Pratt to grow before audiences and, perhaps to our surprise, lead one of the funniest films of 2014. An argument can be made that Rocket and Groot steal Marvel’s most enjoyable film, but every time Pratt’s Star-Lord is on-screen you are reminded that he is just as good a draw. Add in the leading voice performance in one of the year’s best animated films, and we have the rare arrival of a new blockbuster star. – Bill G. There is a reason this category is called Breakthrough and not Debut or Best. Both Rosamund Pike and Carrie Coon have done stellar work in previous films and TV shows (The World’s End and The Leftovers, respectively) but Gone Girl allows both to finally get the attention they deserve. Pike brings a cold, reptilian menace to the titular girl who has gone, and while she sometimes has to perform acts that border on cartoon villainy, she boldly commits to them with a ferocity that cannot be denied. Coon, meanwhile, takes the thankless role of “supportive younger sister” and imbues it with all the real-life emotion — sadness, confusion, anger, and forgiveness — that are bound up in a sibling relationship. Affleck makes for a good audience surrogate with his boundless ignorance as the fates align against him, but Coon and Pike are perfect as the devil and angel working to steer his soul. – Brian R. The Grand Budapest Hotel offers one of Wes Anderson’s best-ever ensembles — no small feat — yet one might easily forget about its heart, the single piece around which most (if not all) of the film revolves: Zero, a precocious boy brought to life by newcomer Tony Revolori. Along with holding his own against several greats, this performance functions as a complement to the interpretation by none other than F. Murray Abraham — a dual instance of resilience and reach. His performance also clearly got noticed by others, as he’s set to lead a Sundance drama. – Nick N.

Jenny Slate first came to my attention as the extremely (and fittingly) annoying and bombastic romantic interest to Aziz Ansari’s character on Parks & Recreation. But that is only one aspect of Slate’s talent, and she shows some true range in her feature breakout role in Obvious Child. Sure, she gets to flex her comedic skill set to much laughter, but she also gets several quiet moments in this raunchy and honest comedy. This is an actress that shines just as bright when not on stage, which is unexpected and refreshing. – Bill G. One so rarely finds an actress who is simply captivating to watch from the first frame. Agata Trzebuchowska, in her first credited role, is a vision in the impeccable Polish drama Ida. She’s shot in black-and-white by director Paweł Pawlikowski, and one of the most striking things about Trzebuchowska is her coal black eyes throughout much of the film. There’s a a sorrowful demeanor, but it can’t quite hide the curious sparkle that emanates from her. As we take a rather harrowing journey into her Ida’s past, she exudes a strong sense of character through action and inaction more than her words. – Bill G. Though admittedly granted some advantage for being at the center of two of Inherent Vice’s standout scenes — there’s the opening, a classic I-need-some-help bit you’ve seen versions of 100 times over, but that’s nothing in light of… well, I’ll assume you’ve not yet seen the movie to ensure you’re not spoiled — Katherine Waterston brings many things to the table: a discernible, believable naïveté; an ineffable air of mystery, like any great noir moll; a vague sadness that, over time, clearly becomes emblematic of the film as a whole; and the sort of throwback charm this film couldn’t (and sometimes doesn’t) function without. A performance at once crystal-clear and more opaque than Pynchon’s plot. – Nick N.