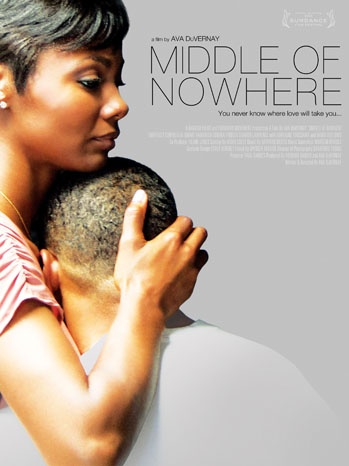 While part of the joy with film festivals like Sundance lies in entering a theater for a film you haven’t heard a single thing about, we are actually getting a number of first looks. The latest comes from Ava DuVernay‘s sophomore narrative drama Middle Of Nowhere. We provided the first stills from the film starring Emayatzy Corinealdi, David Oyelowo, Omari Hardwick, Lorraine Touissant and Edwina Findley, but now we have a teaser for the drama following a woman who is struggling with her incarcerated husband.

Coming from THR, it only runs a minute but shows off some nice photography by Bradford Young. There is no dialogue and not a fan of the use of Fink‘s Perfect Darkness, but it looks like it could be a solid contender. DuVernay has described the film as “a love story about love as choice” and let the music accentuate that with supervisor Morgan Rhodes. They “dug through the crates for songs and sounds outside of traditional R&B and hip hop, but still soulful.” Me’Shell Nedegeocello, Goapele, Ra-Re Valverde, Fink, Jimi James are all artists appearing in the film and you can see the preview below, followed by an interview with the director and the poster. What happens when love takes you places you never thought you would go? When her husband, Derek, is sentenced to eight years in a California prison, Ruby drops out of medical school to maintain her marriage and focus on ensuring Derek’s survival in his violent new environment. Driven by love, loyalty, and hope, Ruby learns to sustain the shame, separation, guilt, and grief that a prison wife must bear. Her new life challenges her to the very core of her identity, and her turbulent path propels her in new, often frightening directions of self-discovery.

Ava DuVernay’s elegant and emotionally inspiring debut portrays the universal dilemma of how a woman maintains herself as she commits to loving and supporting someone through hardship. Featuring luminous performances by a cast of rising stars led by Emayatzy Corinealdi and Omari Hardwick, Middle of Nowhere infuses gravity and grace into the prison tale and marks the arrival of an important new directorial talent.