SXSW Review: US Kids is Most Affecting as a Powerful Character Study 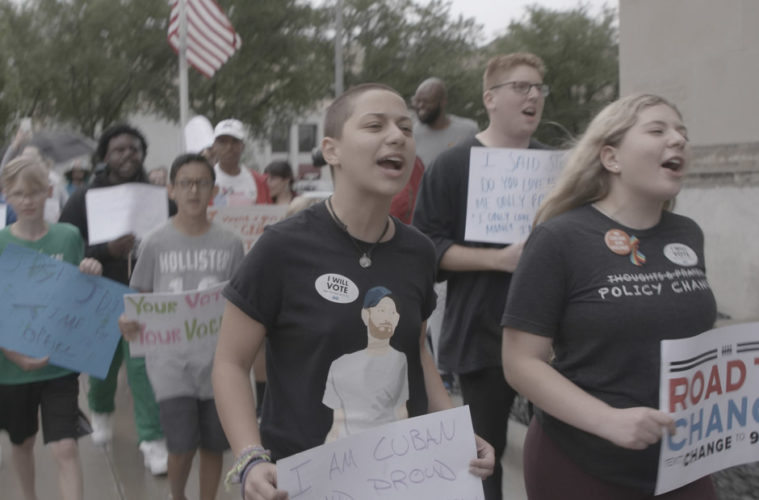 Emotionally affecting if somewhat unfocused at times, Kim A. Snyder’s US Kids is an often inspirational documentary capturing the energy and personalities behind the March for Our Lives and Vote For Our Lives movements that sprung out of the mass shooting at Marjory Stoneman Douglas High School in Parkland, Florida. The film is most effective at chronicling the work and friendships of those in spotlight, including Emma Gonzalez, David Hogg, Cameron Kasky, and shooting survivor Sam Fuentes, all of which have become reluctant advocates in accelerating the conversation.

A broad and sweeping look at the movement, what the film lacks in focus it makes up for in passion as a grassroots campaign springs up, led in part by Hogg and Gonzalez. Kasky, who digs in and organizes events like rallies and negotiates for permits on conference calls with municipalities, starts to take a backseat while Fuentes finds the strength to tell her story even if it physically makes her ill on live television.

The film follows the inner workings of the movement as the group goes on tour, linking up with students like Bria Smith in Milwaukee, who talks of a middle schooler gunned down in an accidental shooting in her neighborhood. The group persists and mobilizes, confronting and even finding ground with counter-protestors in Dallas, who find Hogg and Kasky don’t fit the narrative perpetuated by Fox News and InfoWars. They simply want common sense gun reforms.

Chronicling the political and media components alongside the survival guilt felt by Fuentes, who was shot in the leg in the same classroom as swim star Nicholas Dworet, Snyder offers an intimate portrait of a young woman who is uneasy about her role and responsibility. She laments throughout the process having her world shattered, and forms an unlikely friendship with the younger brother of Nicholas, Alex, and they both find some measure of comfort together.

US Kids occasionally bites off more than it can chew, including a montage of news coverage of mass shootings set to Billy Elliot’s “Bury A Friend” and other heavily stylized sequences, including one full of slow-motion shots in which Gonzales and Fuentes hang out in a destruction room to blow off steam. The film is best and most interesting when it narrows its focus on the tour and the inspirational advocacy of subjects as they move the national conversation on social media. With that, of course, carries realistic consequences as Gonzalez feels the need to withdraw while Hogg, a frequent presence on Twitter, fiercely engages with critics and supporters without missing a beat.

A timely picture that chronicles this movement with the emotional gut punch and importance it requires, a more compelling way to frame the story might have been to follow Gonzalez, Hogg, Kasky, and Fuentes for a few years, checking in to see how this time has changed them. With what is captured, though, Syder creates a character study alongside a film about the larger moment and public health emergency. The character study proves to be just as if not more impactful than a montage of the 24/7 news machine reporting on the latest mass casualty event. US Kids is an inspiring and often harrowing story as we bear witness to both lives changed and lives they are hopefully saving through political pressure, rallies, and voter education efforts.

US Kids was set to screen as SXSW.