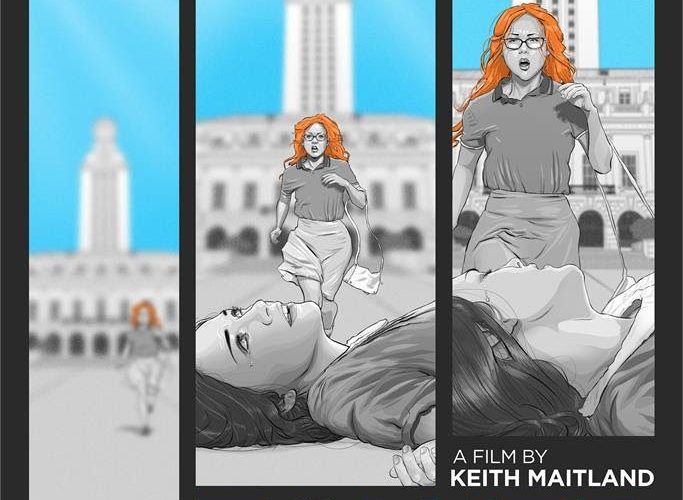 Utilizing an engaging mix of newly filmed footage rotoscoped à la Waking Life, archival materials, and interviews, Tower employs a verbatim style to capture the harrowing events of August 1, 1966, in which a sniper opened fire at the University of Texas, killing 16 and wounding 32 others. Almost never referring to the shooter by name, director Keith Maitland captures the terror of the day told through newsreel footage and animated sections, following several key figures of the drama, including a young pregnant undergrad Claire Wilson, her unborn baby, and her boyfriend, Tom Eckman, who were the first to lose their lives that day.

By exploring the sheer panic, we can follow the heroes of this tragedy: Allen Crum, the manager of the local campus Co-Op who headed towards the tower while others took cover; Austin police officers Ray Martinez and Houston McCoy, who did exactly what they had to without the kind of SWAT gear and training that shootings such as this would create a need for; and two bored friends, John Fox and James Love, who stopped by the campus to see what was going on, swooping in and racing Wilson to safety.

It’s quite a cartographic feat, providing an accurate sense of geography and proximity, aided by reporter Neal Spelce, who circled the campus as the nation watched in horror. Like Maitland’s previous feature, The Eyes of Me, Tower takes on a hybrid of animation, interviews, and recreations. Claire Wilson’s own words are performed in a rotoscoped past by Violett Beane as history separates and merges with the present in the film’s touching third act.

Perhaps the flaw of Maitland’s storytelling is also what makes it so effective and haunting. The first and second acts are riveting in ways that resemble an effective action picture, weaving drama, violence, tension, and uncertainty. The Whitman massacre is nearing its 50th anniversary this year, and while mass shootings seem to appear daily in the news, this picture quite accurately explores the action and its aftermath. Some ultimately do go on to find comfort as others remained haunted, for there was no playbook for dealing with the trauma of that day.

The longer this film pulls back from the day and the more its animation focuses on the outcome, the more profound it grows. The picture lives firmly in an uncanny valley of its time: while a memorial is slated to finally be revealed later this year, the UT Austin campus today looks largely as it did half a century ago. Tower offers a chilling, first-hand account of those tremendously haunting days that live in infamy within our collective conscious: days that begin like any other until the unimaginable occurs.

Tower premiered at the 2016 SXSW Film Festival and will be released on October 12.