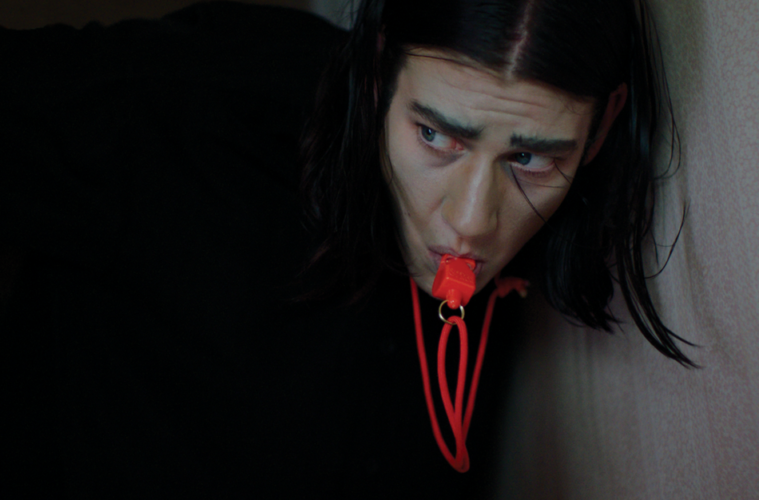 A brief and ugly affair, Tito is a weird for the sake of weird midnight cult film that overstays itself welcome by design: the patriarchy and its byproduct of obnoxious, drunk men have also overstayed their welcome. In a year where SXSW offered mindless sex comedies like Good Boys alongside thoughtful ones like Yes, God, Yes, Tito aims to offer an angrier response: a striking horror film about victimhood without providing easy answers. Reaching this conclusion requires heavy lifting and the testing of patience; like last year’s masterpiece Relaxer, Tito offers a universe that is quite difficult to enter and inhabit.

Written, directed, and starring Grace Glowicki, she plays Tito, a cisgendered male who befriends an obnoxious geek John (Ben Petrie), an intruder from next door who arrives in Tito’s life and refuses to leave. Like Relaxer, the film offers a good chunk of hanging out and discussion that seems to go nowhere, parodying the kind of “deep conversation” you might find around the convenience store parking lot. If only Jay and Silent Bob appeared to save the day.

When we first encounter Tito, he’s shell shocked, bleeding from the mouth while shopping for cereal at his local market before heading home to vomit it back up in a gruesome sequence that sets the tone for the entire affair. John, the neighbor, offers some comfort and safety to the shaken Tito, cooking breakfast, watching TV with him, and ultimately attempting to connect. He believes he’s met his best friend and reaches the point where they play pornographic video games with each other before heading to a club to pick up women. The geek–or friendly neighbor, as he’s credited in the film–requires some Dr. Huxtable-like assistance in this endeavor.

Tito is a rare expressionist picture that unfortunately requires reading the director’s statement to understand. In terms of its effectiveness, it’s a repulsive punk rock work that falls short of achieving what it sets out to do, finding itself parodying work that’s already a parody of itself. The banter between Tito and John–the bulk of the film’s seventy-minute running time–is enough to test the patience of most audience members. The striking visuals of the third act as the film resolves itself once Tito is let loose and into the wild partly redeem a picture that feels like its gone nowhere, taking over an hour to do something that would have been brilliant in twenty minutes.