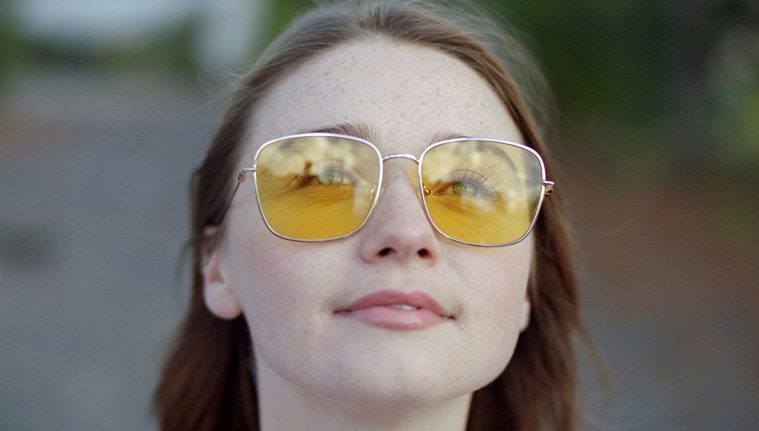 An indictment of modern hook-up culture, The New Romantic offers an often surprisingly funny look at one aspiring journalist’s experimentation with a sugar daddy relationship. Jessica Barden stars as Blake, an undergraduate who’s trying to win the $50,000 Hunter S. Thompson prize for Gonzo journalism that will help her pay off her student loans. Set on a small-town Ontario campus, The New Romantic offers an accurate look at college life as Blake finds her community and attempts to discover herself. The film echoes Blake in that just as she lacks some of the answers, so too does the narrative, as we see her naïveté perspective in scenes like Blake turning to YouTube tutorials to understand what a “sugar baby” relationship exactly entails.

As the film opens, Blake writes a hopeless romantic column aspiring for something more than just casual intimacy from Tinder, inspiring her roommate Nikki (Hayley Law) to comment that she’s writing a sex column without the sex. She instead aspires to have a life like those found in the films and novels of her idol, Nora Ephron. Challenged by her editor, Matt (Avon Jogia), to expand her horizons to reviews, she takes an assignment to review a show and heads out to get drunk before the show, leading to an ID mixup that takes her to the apartment of Morgan (Camila Mendes), a woman who has a sugar daddy relationship with Johnny (Greg Hovanessian).

Days later, she goes to a pool party at Matt’s where she’s introduced to Ian (Timm Sharp), a bearded business professor born in the 70s and down to party. Inviting her out to dinner, he lays down certain ground rules including that he doesn’t want to write checks. Citing Jane Austen, Blake tells her that a financially beneficial relationship is nothing new, and they start their new relationship. From the beginning, the gifts keep pouring in: a moped to replace her bike, a diamond bracelet, and even a letter of recommendation for the competition. The kind of relationship Ian seeks is a simulation of romance–handholding, wine and cheese in the park, travel–while curating his emotional and interest level. He’s able to show up unannounced at her apartment but she can’t do the same–he’s not interested in her troubles at all hours of the day.

Written and directed by Carly Stone, The New Romantic, like this year’s Blame, feels as if it was written and directed by someone that is the same age of its protagonist, lending a certain accuracy that an authority figure with years of experience might impose on its characters instead of making it feel lived-in. An otherwise immersive experience, the film does fall short in its over-reliance on voiceover to wrangle itself out of situations that a more mature film might have further explored. The structure, which places the events of the film in the context of a final column as well, is a story choice that doesn’t always work to its benefit.

The New Romantic is the rare film presents these relationships without judgment offering up the good, bad, painful, and confusing as a matter of fact.

The New Romantic premiered at SXSW 2018 and opens on November 9.